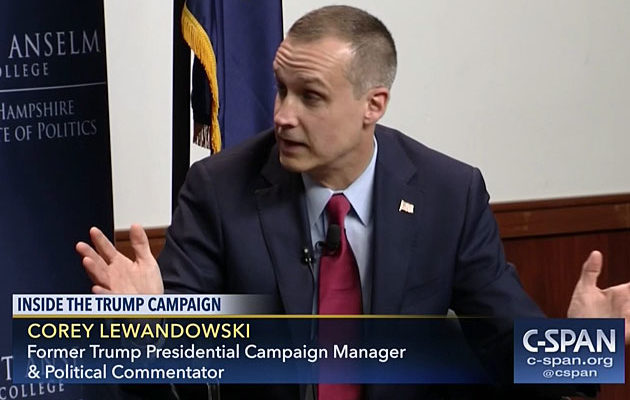 NEW YORK, NY – It was President John F. Kennedy who popularized the aphorism, “Success has many fathers. But failure is an orphan.” It was Corey R. Lewandowski and David N. Bossie, who in their best – selling co-authored book, “Trump’s Enemies”, relate, more than a half a century later, Kennedy’s old favorite saying to Donald Trump’s presidential campaign and subsequent election as America’s 45th President.  And they did it using only these four words: The November Ninth Club.

Lewandowski, Trump’s former campaign manager, whom I interviewed this past Friday, explained the term to me. “The November Ninth Club refers to an untold number of Washington insiders. These insiders covertly opposed Donald Trump when they thought he would never be elected president”, he stated.  “However, beginning on, or soon after, November 9, the day after Mr. Trump’s historic victory, these self-servers suddenly became Trump supporters. And more than a few of them were, unfortunately, able to tunnel their way into the White House.”

That each one of these four former Trump officials found themselves cast out of their jobs within 16 months after their appointments due to, as has been widely reported, President Trump’s disapproval of their job performance (with Porter, though it was more than that: he resigned from his job after domestic abuse allegations from both of his former wives was revealed to Trump) has predictably not caused Lewandowski to lose any sleep.  “As Dave and I write in our book, every president must possess the total confidence that his staff is loyal and can be trusted” Lewandowski stated.  “Those [four] individuals never understood the meaning of trust and loyalty. So it is good for the country and good for the Trump presidency that they are no longer in the White House.”

Yet, Lewandowski contended during the interview (as he and Bossie wrote in the book which also contains a chapter chronicling their 45-minute interview with the president conducted in the White House this past September), that even with Priebus, Porter, Spicer and Cohn gone, there are members of “The November Ninth Club”, who still remain at their jobs in the White House, albeit under the president’s and the two authors’ radar. “As President Trump said in a recent interview, there are people working to undermine him and sabotage his administration within the White House”, he claimed. “The president has acknowledged that he, unfortunately, does not know who they are.  While Dave and I have our suspicions, we cannot say for sure who they are. But if and when we find out, we will let the President know in a second.”

Lewandowski, now 45 and Bossie, now 53, both seemingly have earned the right to serve as protectors of the President. Each had sat on the bandwagon of the Trump presidential campaign in its crucial stages.  Trump had appointed Lewandowski- a Republican strategist, writer, political commentator and lobbyist – as his campaign manager, in June, 2015, six months before Trump even declared his candidacy. And in September, 2016, in the heat of the pivotal final two months of the campaign, Trump named Bossie –  an author, columnist, documentarian and Republican and Conservative Party activist – to serve as his assistant campaign manager.  It was a move, Lewandowski recalled, which coincided with the increasingly vicious attacks Trump was enduring from the media and from establishment denizens embedded both in the Democratic and Republican Parties, who were, he theorized, becoming frantic at the thought of a Trump victory.

Lewandowski, who had left the campaign several months before, explained why the appointment of Bossie was so timely. “I was gone and Dave became the deputy campaign manager in the final 60 days of the campaign. He was the perfect man for the job, a tough and loyal media and politically savvy heavyweight, who would lead the battle against the rising barrage of attacks against Mr. Trump, which were increasing as it became clearer every day that Trump could actually become president”, stated Lewandowski.

“These attacks came from different directions” he added. “They came from the media, which was up in arms against Trump because he called them exactly who they are – the fake media; it came from the Republican establishment, which correctly feared that, if elected, Trump would challenge the party orthodoxy on such key issues as the unfair to the American worker trade imbalance which the GOP establishment long supported through NAFTA and other terrible trade agreements;  and it came from leaders of the Democratic Party, who saw a Trump victory as their worst nightmare, because the success of his policies when he became president would expose to the country the failure of theirs.”

A seeming master of the four- word axiom, Lewandowski then repeated to me the two nouns and two verbs that he coined in the beginning of the campaign that he believed helped lead to the Democrat’s “worst nightmare”. “In the early days of the campaign, I came up with a four word, very simple phrase: ‘Let Trump be Trump’. I believed it was perfect, because the real Donald Trump we knew –  the courageous, truth telling, iconoclastic, sometimes politically incorrect patriot could connect with the voters like no other candidate ever could. And when Dave joined the campaign he enthusiastically followed the mantra to ‘Let Trump be Trump’,  he stated.

These same four words were later to become the title of the authors’ first book on Trump (“Let Trump be Trump”). Written and published within a year of Trump’s Inauguration, the 275 page tome provides the authors’ inside day to day story of how Trump, a political neophyte, pulled off the biggest upset in the history of American Presidential politics. And, according to Lewandowski, and as he and Bossie indicate in “Trump’s Enemies”, the four words that comprise the title of their first book remain the best words for now President Trump to live by as he faces enemies, many old and some new, who currently are attempting to destroy his presidency.

“Trump must continue to be Trump in this battle to save his presidency” stated Lewandowski. “And thankfully he has been just that. He has used the bully pulpit of his office and the strength of his own personality to expose his ruthless enemies who could care less about justice and truth and even less about what harm their witch hunt against the President is causing our nation.”

Referring to the on-going controversial Russian Collusion Investigation, Lewandowski named and criticized several of these “ruthless enemies”, whom the President has battled throughout the past two years. “As you can also read in our book”, he stated, “Former FBI Director James Comey used the easily proven fraudulent ‘Steele Dossier’ (containing now disproven allegations that the Trump campaign colluded with Russia) to set the stage for this two year witch hunt against the president, and Special Counsel Robert Mueller used this phony ‘Steele Dossier’ as an excuse to start this so called ‘investigation’, which was simply part of their plan to delegitimize the Trump Presidency.  But, thankfully, Trump himself has fought back and exposed their lies”.

“The list of these liars”, Lewandowski continued, “also includes former members of the Obama Intelligence apparatus, led by former CIA Director John Brennan and former Director of National Security James Clapper, who have helped perpetuate this ‘Russian Conspiracy’ hoax, and, of course, making that list is also the fake news, which has reported these easily proven false accusations, as if they were indisputable facts. But, thankfully, against these foes,  President Trump himself has fought back and exposed their lies.”

Lewandowski contended that the list of people in public office, who have lied to damage the president over the “Russian Conspiracy”  does not end there. “Sadly”, Lewandowski stated “there are many Democrat elected officials, it appears a majority, whose seemingly sole purpose in life is to destroy the Trump Presidency through the use of lies. Just look. In the absence of even an iota of evidence of the President’s colluding with Russia during the campaign, it has become the accepted practice for Democrat elected officials from Congress members Adam Schiff and Maxine Waters in California to Jerry Nadler in New York to attempt to sell this false allegation to the American people, and to have the gall to call for his impeachment. But, here again, thankfully, President Trump himself has fought back and exposed their lies.”

Still, Lewandowski believes that Trump has found an even more effective way to overcome his antagonists. “President Trump has knocked the hell out of his enemies in the most effective way: by having the greatest number of accomplishments in his first two years in office than any of his predecessors in the history of our great nation” he stated. “Because of his brilliant economic policies the American economy is booming like never before;  and because of his  tough foreign affairs policies, America is once again trusted by its friends and respected by its adversaries throughout the globe, which is the total reversal of the conditions in the Obama years. It is this success which, I am confident, will lead to his re-election in 2020.”

Whether or not that prediction comes true, one thing is almost certain: with friends like Cory  Lewandowski, Donald Trump will never feel like an orphan.

Robert Golomb is a nationally and internationally publishedcolumnist. Mail him at MrBob347@aol.com and follow him on Twitter@RobertGolomb 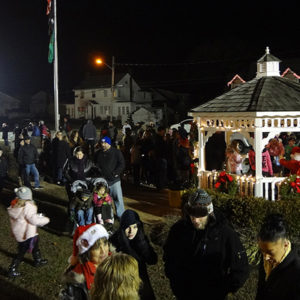 by Christopher Boyle Massapeauans gathered in cheer and goodwill to welcome in the yuletide season at the Chamber of Commerce’s...