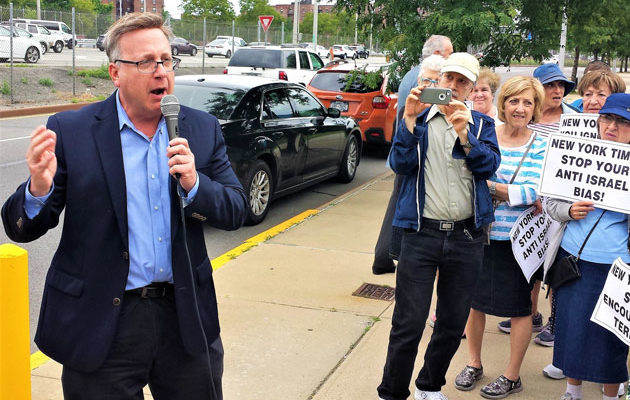 NEW YORK, NY – David Bressler, the Republican/ Conservative/ Reform Party candidate for the New York State Assembly in the Northern Queens 26th A.D. in this coming November’s election, told me during an interview I conducted with him last week, that while he promises to never mount a personal attack on his opponent, 4-term Democratic incumbent Edward Braunstein, that promise does not apply to Braunstein, the Assemblyman and member of the Democratic Party.

“I have met Assemblyman Ed Braunstein on several occasions and have found him to be pleasant and respectful… I have nothing but good wishes for Ed Braunstein, the man; those same good wishes, though, do not extend to Ed Braunstein, the Assemblyman, because he belongs to and has voted consistently along with the new configuration of the Democratic Party that is pursuing extremist, leftist, progressive policies that are disastrous for the state in general and the 26th A.D. in particular”, Bressler stated. 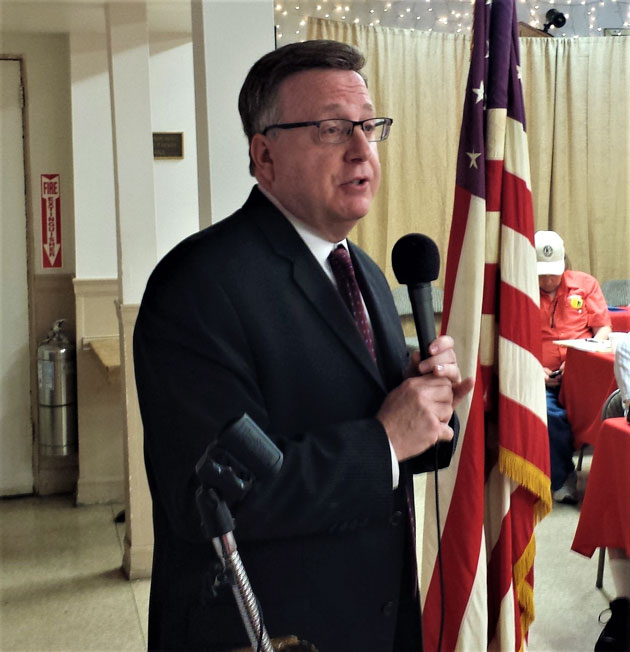 Bressler, sixty, whose resume includes running his own small business, working as a director in private industry and serving as a president and treasurer of the Bay Terrace’s Bay Club, a large apartment complex where he has lived the past ten years, offered three specific examples of what he contends to be left-wing Democratic policies that he ties to Braunstein because he is a member of that party.

The first concerns the highly contentious Assembly bill, A10427. Sponsored by Brooklyn Assemblyman Charles Barron this past May, the bill, if it becomes law, would do away with the Specialized High School Achievement Test (SHSAT), a long standing highly competitive knowledge – based entrance exam administered to graduating middle school students seeking admission into the eight specialized NYC High Schools, which include Stuyvesant, Brooklyn Technical and the Bronx High School of Science. Under the bill, which was designed to increase the rate of black and Latino student enrollment in these specialized high schools from its current 9% to 45% within the next three years, grade point average (GPA) would primarily replace the SHSAT as the criteria for admission into these schools. 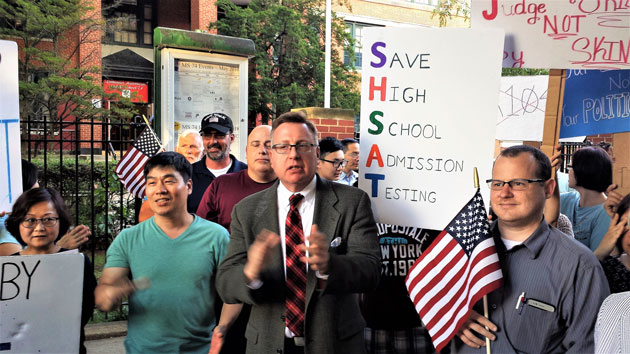 Bressler explained why defeating this bill would be one of his top priorities if he is elected to the Assembly. “Grade point averages, while important, are known to sometimes be highly subjective”, Bressler stated. “There has been one objective, color-blind criterion for admission into these eight specialized high schools, which have been the crown jewel of our city’s education system for more than fifty years, and that has been the SHSAT; eliminating this exam would be a blatant act of discrimination initiated by left-wing politicians against students who have worked hard to acquire the knowledge and skills to pass the SHSAT; and many of these students, by the way, come from poor families, and many come from Asian backgrounds.”

While Bressler acknowledged that Braunstein himself had opposed the Assembly bill, he questioned his opponent’s commitment to this issue, “I give some credit to Assemblyman Braunstein for stating he favors keeping the SHSAT”, he stated. “However, he has never even made an appearance, let alone speak, at the many Queens rallies held to save the SHSAT. By contrast, I always attended, and, often was proudly called upon to address the concerns of these mothers and fathers (in attendance), who simply want their children to be given a fair and unbiased chance to obtain admittance into New York City’s most competitive high schools…… The Assemblyman’s failure to attend these rallies sheds serious doubt on what he truly believes and how he might vote in Albany when the bill {A10427} actually comes up for a vote in the Assembly.”

Noting that A10427’s sponsor, Charles Barron, was a former member of the radical Black Panther Party, and, also noting that the bill has been strongly supported by left-leaning Democrat Mayor Bill de Blasio, Bressler added, “Here is a bill that its supporters claim will make the NYC School System more inclusive. Isn’t it ironic that it was introduced by Assemblyman Barron, who is a known race baiter, and strongly supported by Mayor de Blasio, who has called officers in the NYPD, the most professional and most ethnically and racially diverse police department in the nation, racist? In addition to numerous studies that prove that similar academic-social engineering projects have not worked in other cities and states where they have been tried, the race baiting backgrounds of the bill’s two major supporters should make even its most adamant supporters rethink their positions.”

Secondly, Bressler blasted Governor Cuomo’s executive order issued this past May restoring the voting rights of the approximately 24,000 New York State felons currently on parole and slammed Braunstein for not publicly opposing the governor’s controversial move. Pointing to studies showing that many of these parolees are convicted murderers, rapists and pedophiles, Bressler stated, “It is beyond all reason and all measures of justice that the governor has granted voting rights to some of the most violent criminals in the state. And, very sadly, Assemblyman Braunstein has remained totally silent and failed to oppose the governor on this critical issue.”

Bressler added that among the murderers on parole that Cuomo granted the right to vote is Herman Bell, a recently freed 1971 three-time convicted cop killer. “On May 21, 1971, Herman Bell murdered New York Police Officers Joseph Piagentini and Waverly Jones, and on August 29, four months later, while still on the loose, this monster participated in the murder of San Francisco Police Sergeant John Young…. For these horrific crimes, Bell should have spent his entire life rotting in prison. Instead, he was paroled this past spring by Cuomo and, beyond all comprehension, now has the right to vote”, stated Bressler.

The GOP candidate also condemned the governor’s granting voting rights to rapists and pedophiles who will be allocated a two-hour time frame, 7pm – 9pm, to vote in school polling sites on election days. “Didn’t the governor realize that the very idea of sexual predators being allowed to enter schools would offend the sensibilities of New Yorkers? Worse still, didn’t the governor realize that allowing these fiends on school grounds from 7-9 pm would jeopardize the safety of the tens of thousands of students throughout the state who participate in after school programs during those hours?”, Bressler asked rhetorically. 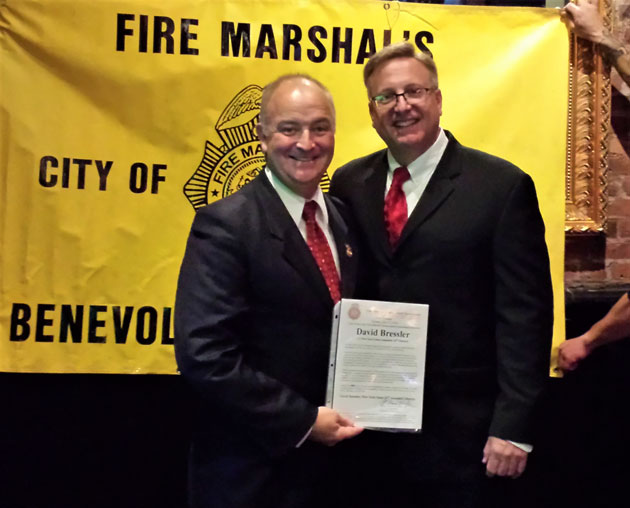 Bressler’s increasingly animated criticism of the governor’s action (and Braunstein for not opposing it) to grant voting rights to parolees continued. He contended that by granting this right by an executive order, the governor circumvented state law, which prohibits convicted felons from voting until they have completed their time on parole, and, Bressler maintained, also bypassed the established right of Assembly and Senate legislators to vote on any proposal to change an existing law. “The governor acted like a dictator”, Bressler stated. “He bypassed the elected legislators of our state to unilaterally annul a law which protected our citizens…. It also deeply concerns me that Assemblyman Braunstein has remained silent while the governor did this.”

Lastly, Bressler tied Assemblyman Braunstein to Governor Cuomo’s and Mayor de Blasio’s controversial plan, announced last year, to, within the next ten years, close Rikers Island- a vast jail complex incarcerating approximately 9,000 inmates at a time, which for decades has been plagued by violent attacks committed by inmates on correction officers, civilian employees and other inmates- and transfer its entire population into a cluster of smaller prisons placed primarily in residential neighborhoods throughout the city’s five boroughs. Bressler asserted that, if implemented, the plan would endanger the safety and security of all New York City residents.

“Many of these prisoners (jailed at Rikers) are pending trial for murder, rape, robbery, assaults, and other serious crimes”, Bressler stated. “Some of them belong to deadly gangs…. I share the fears expressed to me by people in the 26th {AD} that a significant number of the people who would come to visit these inmates would themselves have criminal backgrounds and gang affiliations and would thus endanger their and their family’s safety. That Assemblyman Braunstein has refused to publicly oppose this dangerous plan is something that I do not believe the people in the district will forget…. Unlike my opponent, if I am elected to the Assembly I will use my legislative power and the power of the bully pulpit of my position to make sure that this dangerously ill-conceived plan is thrown into the waste basket, where it belongs.”

Bressler might have a real chance of making good on that promise. While reliable polling data is not as of this writing available, the general consensus of my Queens Democratic and Republican sources is that the race in the 26th A.D. is a toss-up. These political pundits, I learned, view last year’s NYC mayoral election, where the Republican challenger, Nicole Malliotakis, bested Mayor de Blasio by an eye-catching 23% margin in the 26th A.D., as a positive omen for fellow Republican Bressler. However, most of these same pundits pointed to the 2.5 to 1 voter party registration advantage that Democrats hold over Republicans in the district as a daunting challenge for Bressler to overcome. 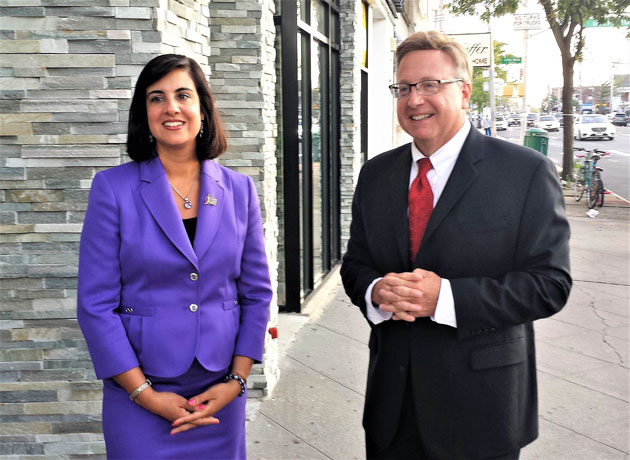 So it seems unlikely that there will be many educated bets made on whether David Bressler or Ed Braunstein turns out to be the winner on election night, November 6th, in the race for the assembly seat in the 26th A.D. 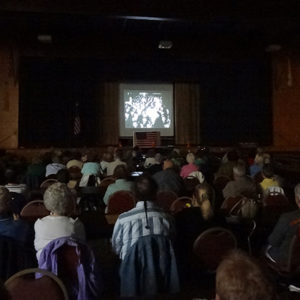 by Christopher Boyle LONG ISLAND, NY - At a time when the world seems embroiled in conflict and chaos, and newspaper headlines...