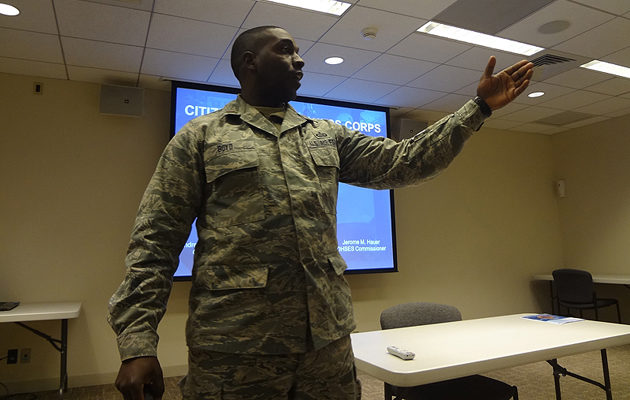 LONG ISLAND, NY – Since Superstorm Sandy visited untold damage and devastation upon New York residents in 2012, the state has taken steps to make sure that local residents are ready for the worst in the event that another storm – or another disaster of any type, be it natural or man-made – through the Citizen Preparedness Corps, a program authorized by Governor Andrew Cuomo and conducted by the Air National Guard.

“With extreme and unpredictable weather events now the norm, it is critically important that New Yorkers are properly trained and prepared for whatever Mother Nature throws our way,” Governor Cuomo said. “I encourage all New Yorkers to take this training with the Citizen Preparedness Corps so they can be vigilant and prepared in the event of an emergency.”

With the start of 2018 hurricane season on the east coast, the Citizen Preparedness Corps are out in force in order to help empower the populace in the event the worst occurs. Recently, at the Syosset Library, Air National Guard Lieutenant Robert McCoy lead a class aims at getting citizens prepared in the event of a catastrophe befalling the Long Island region. Knowledge is power, McCoy noted, and that power just might save your life in the right circumstances.

“This is an initiative from Governor Cuomo that started in March of 2014, and this was part of an effort that was formed after Sandy just to get information out,” he said. “He heard the message-that people want training on how to be prepared for natural disasters. So, the Governor teamed up with the Department of Homeland Security and Emergency Services and the National Guard, and they put this training together.”

Training sessions are conducted in conjunction with experts from the Division of Homeland Security and Emergency Services’ Office of Emergency Management and Office of Fire Prevention and Control, as well as by volunteers from the American Red Cross. Since its inception in 2014, over 250,000 people from across the state have become better prepared in the event of an emergency or disaster.

McCoy noted that a series of Citizen Preparedness events are currently taking place throughout New York, and these classes – all open to the public and free of charge – offer survival advice and strategies during a number of different disaster scenarios- natural, such as storms; man-made, such as a terrorist attack; and technological, including mass black-outs, computer hacking, and the like.

“Natural disasters include things like earthquakes, snow storms, hurricanes, coastal flooding, and disease outbreaks,” he said. “Man-made would consist of terrorist attacks such as what happened on 9/11, a nuclear power plant shutting down, and so on. Technological disasters would cover things like blackouts, cyber-attacks upon infrastructure, communication outages, and so on.”

Lieutenant Taalib Boyd led a question and answer session with audience members, noting that the information that was being offered that evening was assured of being used at some point in their lifetimes; it wasn’t an issue of “if,” he said, but “when” disaster will strike.

“Compared to much of the nation, New York has a higher overall risk level due to several factors,” he said. “One, we have a large population. Two, New York is very symbolic, so it’s a likely target; and three, we have a lot of coastal area open to flash flooding and storms. There are a number of risk factors, and people need to be ready for them all.”

The single most important way you can prepare for a disaster, McCoy said, was to make sure that every member of your family is in possession of a “Go Kit” consisting of a backpack containing a variety of vital emergency survival items that could mean the difference between life and death should the worst happen and aid is unavailable. Non-perishable food, water, medical supplies, flashlights, a crank-operated radio, batteries, important documents and ID cards, hygiene items, and even a book or two are among the items that are recommended for a Go Kit, and it’s important to make sure these items are rotated o a regular basis to ensure that they are fresh and usable at any given time. Possessing a printed list of contact phone numbers is also suggested in case your cell phone is drained or service is not available.

Above all else, McCoy said, always have an evacuation plan at the ready, including an escape route and a pre-determined meeting point should you and your family find yourselves separated for any reason. The important thing to remember during a disaster, he noted, is that you may find yourselves on your own.

“Often, first responders might be tied up elsewhere…if you call 911 during a major disaster, sometimes it could take hours or days for them to get to you,” he said. “So, families need to put together a plan on what to do in case of emergencies. For example, if phones are unavailable, is there a meeting place outside of the home? Outside of the neighborhood? Where are designated emergency shelters? We want families to be prepared ahead of time so they’re ready to help themselves. It’s all common sense, but these things might not occur to someone in their day-to-day lives, but they’re vital for survival.”

To check for new courses, request a course for your organization, or to take the online version, visit prepare.ny.gov. Courses will run throughout September and October. 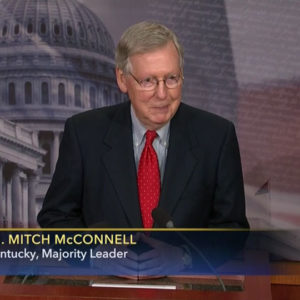 by Steve Birr WASHINGTON - Party leaders in the U.S. Senate reached an agreement Thursday to vote later in September...