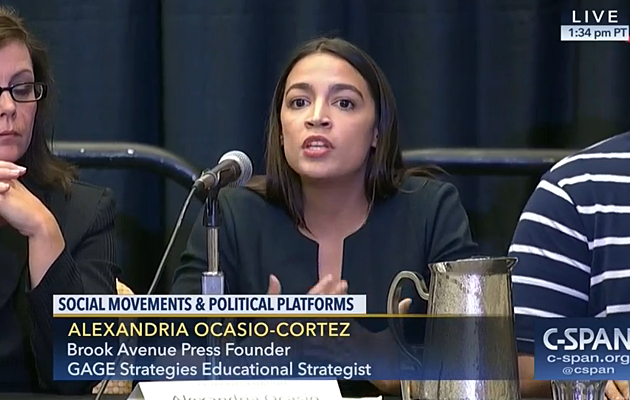 Ocasio-Cortez began by bragging about her meeting with a Nobel Prize-winning economist and claimed her ideas could net the United States trillions of dollars.

“This is an excellent, excellent question,” she replied. “I sat down with a Nobel Prize economist last week — I can’t believe I can say that, it’s really weird — But one of the things that we saw is, if people pay their fair share, if corporations and the ultra wealthy — for example, as Warren Buffett likes to say, if he pays as much as his secretary paid, 15 percent tax rate, if corporations paid — if we reverse the tax bill, raised our corporate tax rate to 28 percent … if we do those two things and also close some of those loopholes, that’s $2 trillion right there.”

She also said it would take $3 trillion to $4 trillion and a carbon tax to create a “renewable energy economy” and claimed the Trump tax cut bill prevents the wealthiest Americans from paying “their fair share.”

“One of the wide estimates is that it’s going to take $3 trillion to $4 trillion to transition us to 100 percent renewable economy,” she continued.

“The Daily Show” host @Trevornoah asked Socialist congressional candidate Alexandria Ocasio-Cortez (@Ocasio2018) how she plans to pay for her agenda.

It really is hard to watch. pic.twitter.com/OGiPAArlce

“So we’ve got $2 trillion from folks paying their fair share, which they weren’t paying before the Trump tax bill,” she said. “They weren’t paying that before the Trump tax bill. If we get people to pay their fair share, that’s $2 trillion in 10 years. Now if we implement a carbon tax on top of that, so that we can transition and financially incentivize people away from fossil fuels, if we implement a carbon tax — that’s an additional amount, a large amount of revenue that we can have.”

Ocasio-Cortez also targeted military spending and said there are billions of dollars being wasted on defense and said it will take courage from both sides of the aisle to fix the country’s fiscal problems.

“Then the last key, which is extremely extremely important is re-prioritization. Just last year we gave the military a $700 billion budget increase, which they didn’t even ask for,” she said. “They’re like, ‘We don’t want another fighter jet!’ They’re like, ‘Don’t give us another nuclear bomb,’ you know?”

“That is a decision that requires political and moral courage from both parts of the aisle,” she added.

by Jessica Kramer NEW YORK, NY - One of China’s largest sex doll manufactures sends half of its overseas shipments...