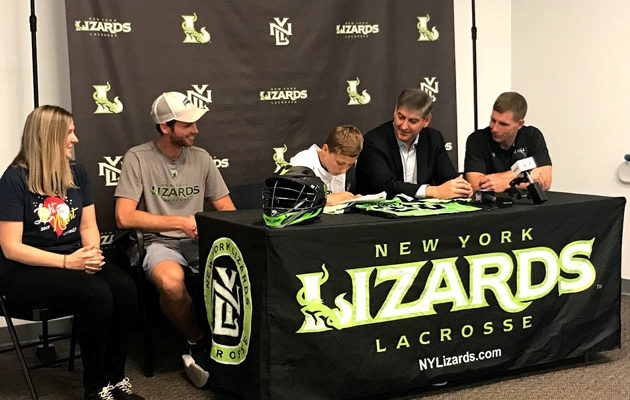 LONG ISLAND, NY – If you didn’t know the entire the story, it might seem that The New York Lizards Lacrosse team is extremely desperate to find new talent to help their team improve upon their current record of 5 wins and 5 losses. How else could you explain the team signing Mason Batz, a 13- year-old boy, to a professional contract last Friday afternoon in the press room in the Lizard’s Hofstra University headquarters? How else could you explain the euphoria accompanying the signing, with the team’s staff including team CEO, Jeff Rudnick, Senior Vice President, Tom Dissette and star player, Drew Adams, standing, all wearing the broadest of smiles, next to Mason as he penned his signature on the one-page contract and accepted a team jersey with his name inscribed on the back, as his father Mike, and sister, Cameron, 11, stood proudly by his side. (His mother, Jeanine, a nurse, was on hospital duty and unable to attend.) How else could you explain the Lizards making the signing into a huge media event, highlighting it at a press conference attended and reported on by a cadre of Nassau, Suffolk and New York City print and broadcast journalists?

The rest of the story as you will see explains it all. Mason, as I learned at the press conference, is really an excellent Lacrosse player. But as Mason himself and his father-both of whom I interviewed after the signing-agreed, the boy will not be ready to become an everyday player for the Lizards until he at minimum reaches his late teens. Dissette, Rudnick and Adams knew this too. But the reason they signed Mason anyway – albeit to a one-day, non-salaried contract – has very little to do with his ability to play Lacrosse but rather something else.

Mason was diagnosed with life threatening acute Lymphoblastic Leukemia- a form of blood cancer mostly affecting children – 7 years ago at the tender age of 6, an age when a boy should be only dreaming about the wonders that the future will bring, not courageously fighting for his life. The Lizards were honoring Mason for that fight and for his courage. It was a fight and courage that his father told me inspired his entire family. 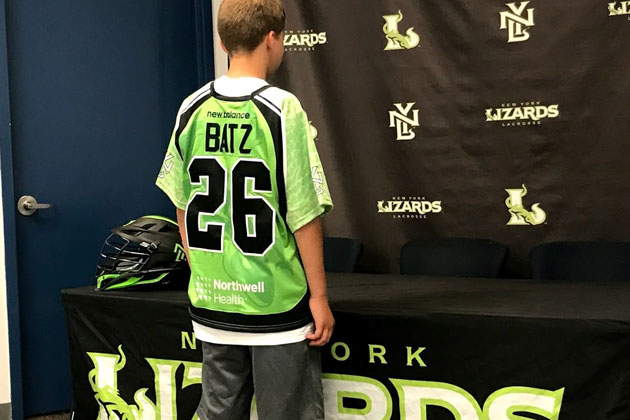 “I will never forget the day that the doctor informed us that Mason had Leukemia. My wife and I were in a state of shock which soon grew into despair”, Mike stated. “It was Mason who became the strong one. He believed and let us know that he possessed the strength, will and faith to beat Leukemia…. Watching Mason bravely going through gruelling rounds of chemo- therapy without uttering a word of complaint gave us back our hope, faith and belief that he would make a full and complete recovery.”

That grueling chemotherapy prevented Mason from participating in sports for 3 years from age 6-9. At age 9, Mike, a sports enthusiast, was allowed and able to resume playing his old favorite game, soccer, again. There was, though, another sport to which he was to become a devotee. “Mason began playing and following Lacrosse’’, his father told me. “He became a huge Lizards fan, and his favorite player was Drew Adams, who he dreamed of meeting one day.”

That dream came true last Friday thanks to the efforts of the staff of two great organizations, The Leukemia and Lymphoma Society Long Island Chapter (LLSLIC) and the Lizards themselves. LLSLIC is the Nassau and Suffolk Counties’ local chapter for the national organization, the Leukemia and Lymphoma Society (LLS). LLS is the largest non-profit cancer fighting organization in America. Its mission is to fund research to find cures for Lymphoblastic Leukemia and all other types of blood cancer and provide financial assistance, if needed, and emotional support to anyone afflicted with these life-threatening diseases.

Last year LLSLIC gave Mason, who lives with his family in Lindenhurst, its 2017 Annual “Boy of the Year Award.” As Mike explained, it was what the LLSLIC learned about Mason while they interviewed him for their award which eventually led to his wonderful experience with the Lizards. “Mason impressed the folks [at LLSLIC] who were choosing the winner [of the Boy of the Year Award]. They were impressed by his incredible energy, enthusiasm and optimism”, explained Batz. 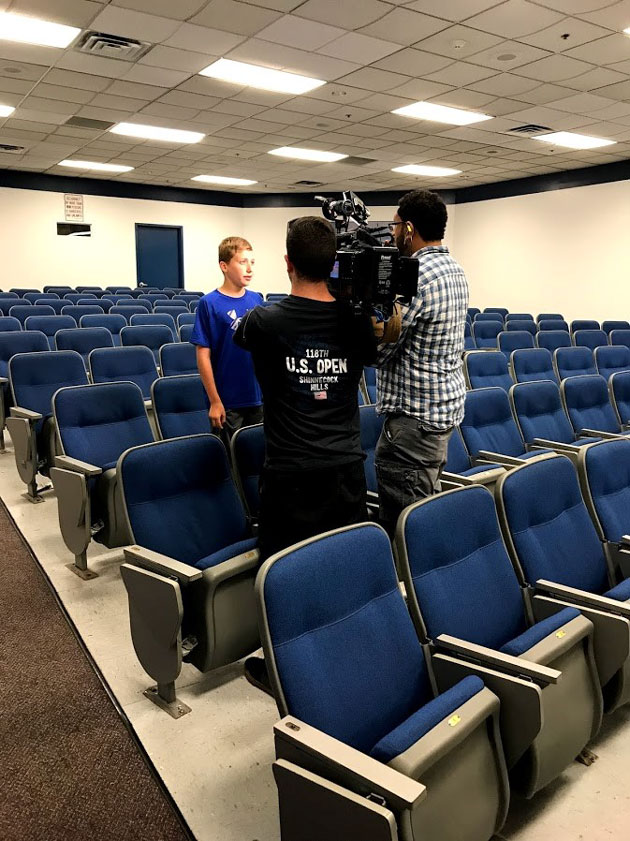 “They were amazed”, he continued, “when they learned he had set up and run his own lemonade stand to help raise funds for research {on cures for blood cancer diseases}. They were also amazed when they learned that he was such an avid sports fan – because they [LLSLIC] had just started partnering with a professional sports team, the Lizards, on an already on-going program which connects children with life threatening diseases with professional sports teams and their players”, explained Batz. It was, in fact, that program, appropriately named the “Random Acts of Light”, which brought Mason and the Lizards together.

I enjoyed talking about all this with Mike Batz, a tall, well-muscled and likeable guy who works by day for the Village of Garden City Department of Sanitation and serves as a volunteer fireman for the Lindenhurst Fire House by night. However, I knew there was still one person left for me to interview for the column to be complete.

That person, Mason Batz, was easy to find. He was at Shuart Stadium-the Lizard’s home field, located a few hundred yards outside the team’s Hofstra University Headquarters – participating in a scheduled Lacrosse catch and throw practice drill with Cameron and Drew Adams. After the drill, which lasted about 30 minutes, was finished, I had the chance to talk with Mason.

The Lizards new player quickly informed me that the team had scheduled another series of events for him the following day at their Shuart Field Saturday night home game; these events would include Mason participating in a pre-game players meeting in the locker room and running out of the stadium’s tunnel on to the field with the entire 25 man team before the game started. “The Lizards have given me the chance to really feel like I am part of their team…. I will always be their most loyal fan”, he promised, “and maybe one day will be able to play on their team.” 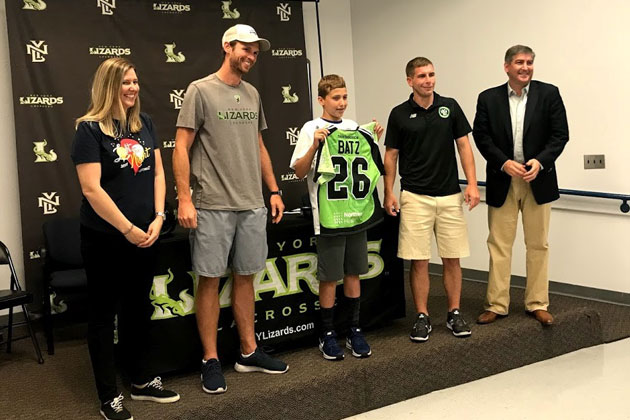 He just might. But far more importantly, Mason appears to be on the way to defeating the disease that had threatened his life and becoming totally healthy once again. The chemo-therapy he endured from the age of 6- 9 appears to have been successful. His blood cancer has been in remission for more than three and a half years now, just 18 months away from November 21, 2019, the exact day that his remission will have reached its exact 5- year mark. For most blood cancer patients and their families reaching that 5-year anniversary becomes a day of incredible relief and great celebration.

Beginning that day their blood cancer is categorized as being in “Complete Remission”, meaning, in medical terms, that all the prior signs and symptoms of cancer in their bodies have vanished. Mike Batz told me earlier why he expects to hear only good news on November 21, 2019 and what he plans to do that day with his family to celebrate. “Our doctors told us that all signs now point to Mason being diagnosed as cancer free that day [November 21, 2019]”, he stated. “And our celebration will be simply to have our extended family and close friends over our house for a very special dinner.”

I will be meeting up the Batz family again, when I join them at the LLS “Light the Night Walk” LNW- (www.lightthenight.org/longisland) this coming October 20th at Eisenhower Park in East Meadow. The first goal of LNW, which as in the past will be run in more than 150 communities throughout America, is to raise public awareness of blood cancer diseases, which claim one life every nine minutes in our nation. The second goal is to raise funds to find cures for these diseases. At last year’s event, LLS raised more than $ 68.5 million coming from local chapters, like LLSLIC, throughout our nation. Almost every penny of every dollar raised is used to help save the lives of kids like Mason Batz.

Looking forward to seeing you at Eisenhower Park on October 20th. 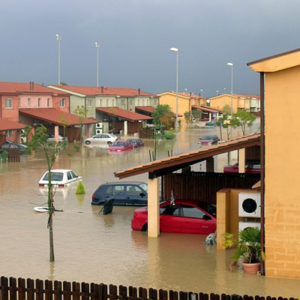 by Christopher Boyle LONG ISLAND, NY - The trials and tribulations of being a homeowner; with the joys and comforts also...