Obama Was “Ready to Go to War with North Korea”; “You Know What Gets You Nuclear War? Weakness”

Before Trump took office, he met with Obama, who warned him that North Korea would be one of the greatest foreign policy challenges he would face as president. During the latter years of the previous administration, North Korean leader Kim Jong Un accelerated his weapons development program, and the results were apparent during Trump’s first year, when the North successfully tested intercontinental ballistic missiles able to range the continental U.S. and a staged-thermonuclear bomb.

“I asked him, have you spoken to him. He said no. Do you think it would be a good thing to speak to him, maybe?” Trump continued. “Seoul is 30 miles off the border. They don’t need nuclear weapons to take out Seoul. They have thousands of cannons, they call them cannons, they have big guns, thousands pointed right at Seoul.” He explained that millions of lives could be lost “if you go to war there.”

“We have a really great relationship for the first time ever. No president’s ever had this,” Trump said.

I want to thank Chairman Kim for taking the first bold step toward a bright new future for his people. Our unprecedented meeting – the first between an American President and a leader of North Korea – proves that real change is possible! pic.twitter.com/yF3iwD23YQ

Trump met Kim for the first time Tuesday at an unprecedented summit in Singapore. No sitting American president has ever met with a North Korean leader, making Tuesday’s meeting an event of great historical significance.

During the summit, Kim and Trump exchanged views on the situation in Korea. Both sides agreed to pursue peace and improve bilateral relations. The U.S. offered certain security assurances, including the suspension of joint military exercises with South Korea, in exchange for a commitment from Kim to the complete denuclearization of the Korean Peninsula.

The summit failed to produce few substantive results, but it has de-escalated the situation after a year of rising tensions. “Despite its many flaws, the Singapore summit represents the start of a diplomatic process that takes us away from the brink of war,” Victor Cha, former National Security Council director for Asia, argued in an op-ed in The New York Times. 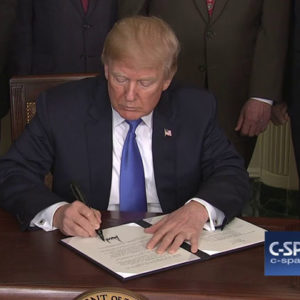