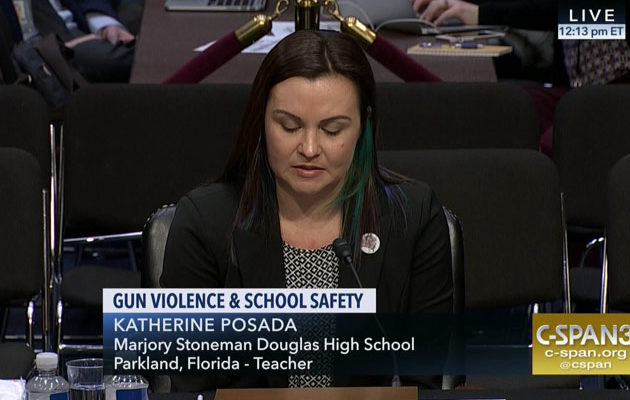 NEW YORK – The Valentines’ Day shooting disaster at the Parkland high school, the sad truth be told, was turned with incredible lightning like speed into a massive Democrat Party 2018 election kick off. With victims still on gurneys waiting to be autopsied, Congresspeople Ted Deutch and Debbie W. Schultz were already financing and organizing the survivors to begin the chant for “Gun Control”, the guilt of the NRA and the defeat of President Trump.

Overnight, plans for voter registration in high schools were in place to secure future voters for The Party. Students were immediately permitted to demonstrate in the streets during school hours. David Hogg, a student at the school, who claims to be a survivor, although many kids have reported that he was not at school that day, was recruited to lead the teams of teens under the banner of the nationwide Town Hall Project founded by former Hillary Clinton staffer, Jimmy Dahman, to boost and campaign for Democrat candidates throughout the country in 2018. How did such smoothly well planned, coordinated and financed programs pop up practically overnight after that shooting? The Progressive media has yet to dig into that query. Perhaps they know too many answers and we still don’t.

Let’s look into the three major players in this tragic event.

The shooter, Nikolas Cruz; the Broward County Sheriff, Scott Israel and the Broward School Superintendent, Robert Runcie. Cruz was a troubled student whose major problems, criminal and mental were covered up by the PROMISE PROGRAM (Preventing Recidivism through Opportunities, Mentoring, Interventions, Supports & Education), an Obama scheme brought over by Runcie from his former employer, the Chicago school system. This was a plan to reduce the reporting of in-school crimes of minority students by conspiring with the Sheriff’s office to reduce the severity of the infractions and have them handled by inept school employees. This not only permitted the schools to be awarded millions of $ as rewards for “reducing crime” but also gave youthful offenders such as Nikolas Cruz clean records and as in his case, the legal right to purchase the weapons used in the slaughter.

The Sheriff’s Department, under Scott Israel, reportedly was called to the Cruz residence over 30 times because of his disruptive and dangerous behavior. They knew all about the weapons he had at home and chose not to follow up on the claims that Cruz had threatened to shoot up the school. Even the FBI ignored repeated warnings phoned to them regarding Cruz and his threats to society. How so many major league criminologists have dropped so many balls?

There are too many coincidences regarding Democrats having a major platform against the Second Amendment and its supporters, the Conservative leaning NRA, the Republican Party and then putting into place such a well prepared political response to the Parkland shooting.

If so, their victims including Cruz, the dead and their mourning families have paid the ultimate penalty for what? Obviously for the shameless pursuit of political gains.

by Kyle Perisic NEW YORK - Facebook partnered with the world’s largest phone and mobile device makers to give those...