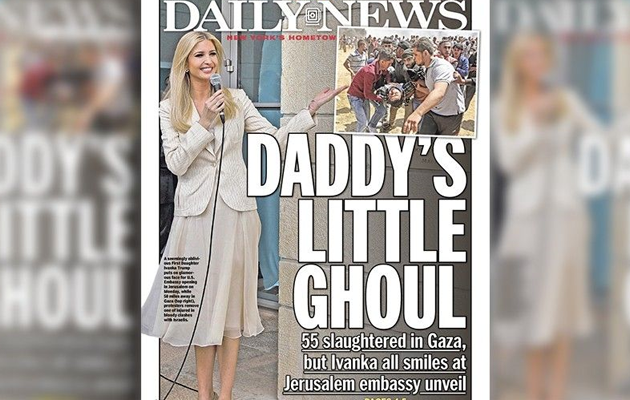 NEW YORK – The despicable, NY Daily News’ front page on Tuesday, May 15th, pictorially condemned Ivanka Trump as being responsible for the deaths of dozens of Palestinian terrorists who were killed as they attempted to storm the borders of Israel from Gaza. She was referred to in the blazing headlines that accompanied her smiling photo as a “Ghoul.” This recycled blend of used Charmin and AngelSoft has sunk to a level whereby its editorial offices belong in the city’s centuries old sewer system. Retailing at $1.50 per copy, it’s a rip-off.

But getting back to the front page photo-shopped images; Ivanka had nothing to do with the rioting nor Israel’s defense of its borders. She was there to support Israel and to be part of the American delegation there to open up its new Jerusalem Embassy. What supposed connection could there be between the possibly fake photo of a guy being taken away from the conflict and Mrs. Kushner? Only the demented “Hate Trump!” moguls of the Daily Snooze could drum up this disgusting image that intends, as well, to support the Kamikaze like thugs of the Palestinian Authority and Hamas.

Within the story itself, buried within its covers, not much of Ivanka was mentioned other than that she and her husband were attendees at the event. She was never questioned about the deadly turmoil outside of Israel’s borders miles away from the Embassy. She never glorified the increasing body count of young men who kamikazee-like, fling themselves at the well fortified barriers shouting Allahu Akhbar as they pray to die in the name of Allah.

And let’s get something straight. Ivanka Trump Kushner is a woman and a mother. To disparage her is to disparage all of her sex. Right??? And when she was verbally and nearly physically attacked on a plane by two whacko NYC Democrats while flying with her two babies, on coach, no less, where was the Daily News in its reporting of that event? Nadda, nothing, not even a mention. After this front page horror, making Joseph Pulitzer turn in his grave, we can’t expect the News to condemn any tweet of the President as outlandish. They have gone the limit!

Shutdown #DailyNews. Sick on so many levels. Anything but news. To commend terrorists attacking Israel as fault of Trump or Ivanka…there is no hope left but shutter organization. @GeenaJagger https://t.co/fyGYtYMqBq

No, the Daily News is on an anti-trump Jihad where they attack anyone who is a supporter of the legally elected President whom they refer to as “Dead Clown Walking.” This dreckisher publication is not worthy of being described as a newspaper. Again, it belongs in rolls on supermarket shelves and stored in bathroom cabinets….and used accordingly.

What a contrast to the front page: "Daddy's Little Ghoul". I'm no Trumpista, but the #DailyNews should be ashamed. https://t.co/v6xE7yyfB3

What Else Was Eric Schneiderman Up To? "Real Scandal in New York Is That All of This Is Legal", Says Watchdog 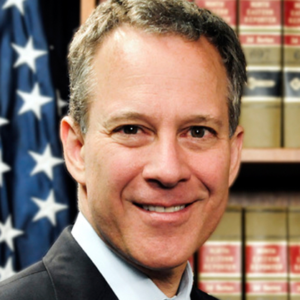 What Else Was Eric Schneiderman Up To? "Real Scandal in New York Is That All of This Is Legal", Says Watchdog

by Chuck Ross  NEW YORK - When Eric Schneiderman resigned as New York’s attorney general on May 7 amid revelations...