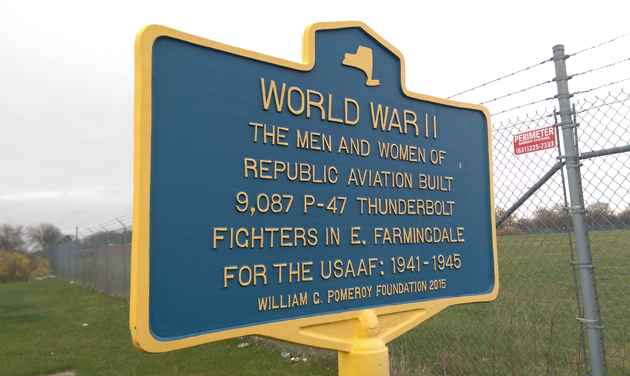 LONG ISLAND, NY – While most Long Islanders are familiar with Farmingdale’s Airport Plaza as a place of commerce and convenience, many have forgotten a much more serious aspect of its past; it’s the former home of a large-scale aircraft manufacturer whose efforts some say helped to turn the tide in favor of the Allies during World War Two.

According to Leroy Douglas, President of the LI Republic Airport Historical Society, more than 9,000 P-47 Thunderbolt fighter-bombers were put together in East Farmingdale from 1941 to 1945 by the former Republic Aviation Company, which was located on the grounds of Republic Airport where Airport Plaza now stands.

LI Republic Airport Historical Society has been dedicated since 1984 to educating the public about aviation, particularly in Farmingdale; one way they furthered that mission is by dedicating a historical marker in 2015 to Republic Aviation at the corner of Conklin Street and Fairchild Loop, shedding light on its vast importance during the largest global conflict there ever was.

“This is important because this was the beginning of mass-manufactured airplanes here by Republic Aviation in 1941,” Douglas said “It’s especially important not only to honor the men and women who did this, but because Republic Aviation is no longer here – it’s been completely razed – we think that it’s important that there be a plaque on this site so that people would realize that, for 60 years, there was major airplane manufacturing here, including one of the most important planes used during World War Two.” 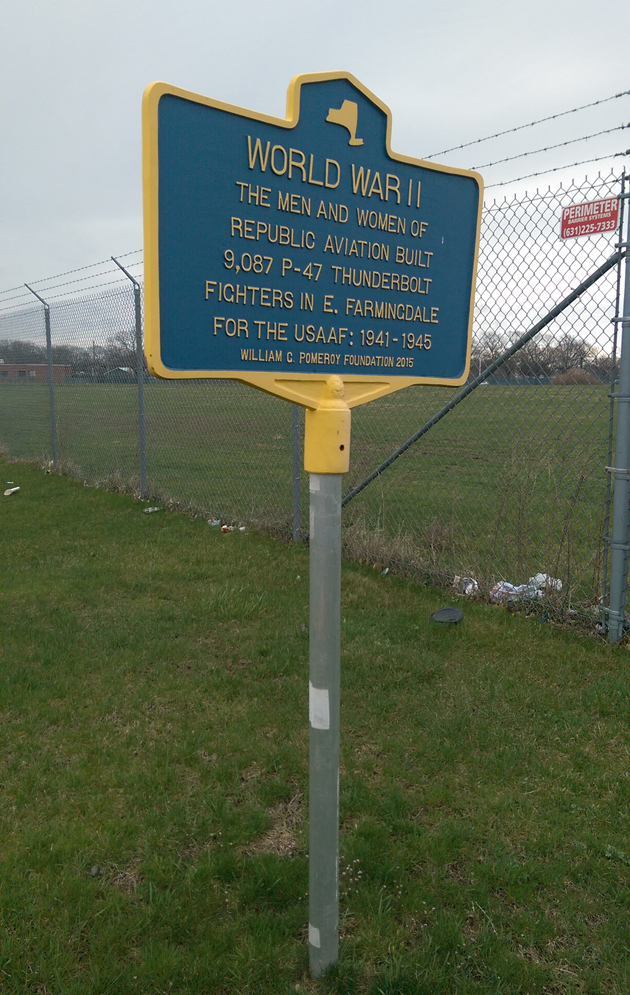 The Historical Society had previously discovered that the William G. Pomeroy Foundation of Syracuse, NY, was sponsoring a program to provide historic roadside markers for areas in the state involved with World War Two, and Douglas said this was the perfect way to shed light on the vast importance of Farmingdale’s wartime history.

“We decided that we would apply to Pomeroy to get a marker here, where over 9,000 P-47 Thunderbolts were built by Republic Aviation during World War Two,” he said. “It was approved by Pomeroy, the marker was cast by the Catskills Casting Corporation, and we were very fortunate to get the cooperation of the New York Department of Transportation, which gave us a site on the airport to display it.”

A ceremony was held in July of 2015 at the location of the newly-installed marker – an eye-catching yellow-and-blue plaque mounted on a metal post – that attracted numerous local dignitaries and community members.

Michael Geiger, Director of Republic Airport for the New York State Department of Transportation, was the man who approved the installation of the marker; it was something he did without hesitation, he said.

“The airport originally opened in 1928, so it’s been here over 85 years…it’s got a long history,” he said. “World War Two was a huge war, and Republic Airport was a large part of the manufacture of the equipment that was used to win it. Recognizing and remembering that, and the people who made it happen, is vital.”

Among the attendees of the ceremony was one very special individual in particular- original “Rosie the Riveter” Josephine Rachiele of West Babylon, who was aged 93 at the time. Rachiele was one of the many American women who marched out of their kitchens and helped with the war effort by working in factories and shipyards during the war. 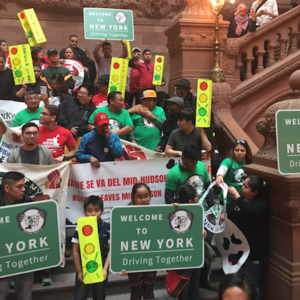 by Andrea Sears ALBANY, N.Y. - Immigrants and their supporters are calling on the state Assembly to pass a bill that would...