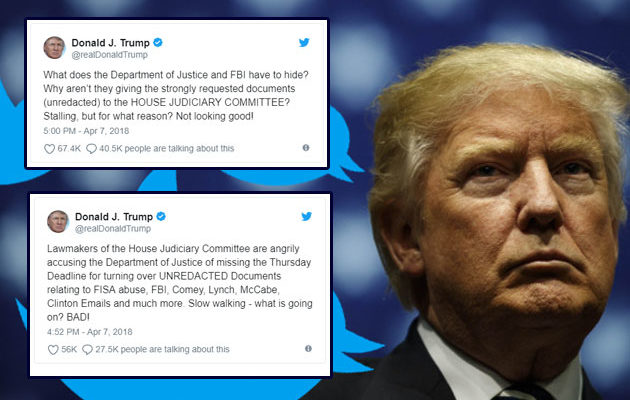 Trump Blasts Agencies on Twitter: “What does the Department of Justice and FBI have to hide?”

WASHINGTON – President Donald Trump berated the FBI and Justice Department on Saturday, accusing the agencies of “stalling” and “slow walking” the handover of documents to Congress.

“What does the Department of Justice and FBI have to hide?” Trump asked in a mid-afternoon tweet.

“Why aren’t they giving the strongly requested documents (unredacted) to the HOUSE JUDICIARY COMMITTEE? Stalling, but for what reason? Not looking good!” he wrote.

What does the Department of Justice and FBI have to hide? Why aren’t they giving the strongly requested documents (unredacted) to the HOUSE JUDICIARY COMMITTEE? Stalling, but for what reason? Not looking good!

He added in another tweet that House Judiciary Committee members were “angrily accusing” the Justice Department of missing a deadline set for Thursday to hand over 1.2 million documents related to several different matters. The committee requested documents about former Secretary of State Hillary Clinton’s email investigation, about the FBI and DOJ’s applications for surveillance warrants against former Trump campaign adviser Carter Page, as well as a report from the FBI’s Office of Professional Responsibility recommending the firing of Andrew McCabe as the FBI’s deputy director.

“Slow walking – what is going on? BAD!” said Trump, who has blasted the agencies on Twitter in the past.

Lawmakers of the House Judiciary Committee are angrily accusing the Department of Justice of missing the Thursday Deadline for turning over UNREDACTED Documents relating to FISA abuse, FBI, Comey, Lynch, McCabe, Clinton Emails and much more. Slow walking – what is going on? BAD!

Virginia Rep. Bob Goodlatte, the chairman of House Judiciary, subpoenaed the documents on March 22. He set the deadline for April 5.

FBI Director Christopher Wray issued a statement on March 27 acknowledging the docu ment production to Congress had been “too slow.” He said he would double the number of FBI staff working to provide documents to House Judiciary from 27 to 54 people. 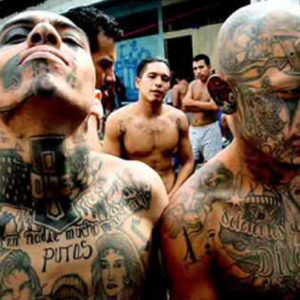 by Christopher Boyle NEW YORK - According to Suffolk County Police and the FBI, human remains have been discovered buried...