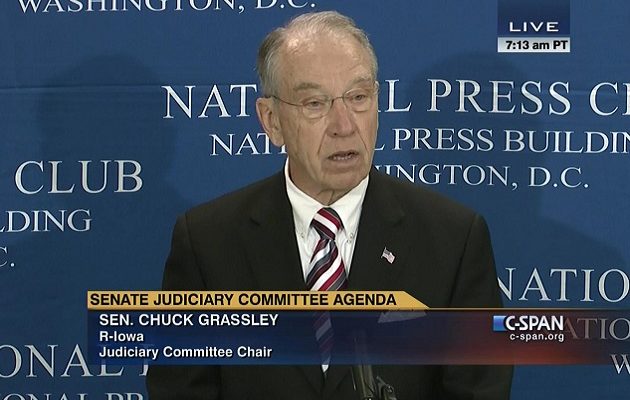 WASHINGTON – Senate Judiciary Committee chairman pledged Monday to hold hearings on the Justice Department inspector general’s investigation results that led to the firing of one top FBI official and the demotion of another.

We are all eager to see the results of that review, and you can be certain that this Committee will hold hearings on that report’s findings once they become available,” Iowa Sen. Chuck Grassley wrote in a letter to Vermont Sen. Patrick Leahy, a Democrat on the Judiciary panel.

The letter comes several days after Attorney General Jeff Sessions fired former FBI Deputy Director Andrew McCabe, a 21-year veteran of the bureau who was set to retire on Sunday.

Sessions made the move based on a recommendation from the FBI’s Office of Professional Responsibility.

The DOJ’s office of the inspector general, which Michael Horowitz leads, found McCabe displayed a “lack of candor” during interviews about his role in disseminating stories to the media about the Clinton investigation.

McCabe, 49, authorized an FBI official to speak to a reporter for a story about the Clinton investigation that ran in the Wall Street Journal in Oct. 2016. McCabe instructed the FBI official to speak to the reporter in order to correct misinformation that was set to be published, he said in a fiery statement issued after his termination. McCabe’s position at FBI authorized him to interact with the media, he added.

He also denied lying to IG investigators about his involvement in the leak.

The report is expected to be released in April 2018.

.@jasoninthehouse on the firing of Andrew McCabe: "You just don’t get fired overnight, this is something that probably started, I’m guessing, over the summer… You have to have done some serious stuff over a long period of time." pic.twitter.com/ShLRoYSDAs

President Donald Trump faced blowback from Democrats because of his past comments about the FBI No. 2,  though the FBI’s internal ethics bureau recommended McCabe’s firing. Trump criticized McCabe because his wife received campaign contributions for a 2015 Virginia state Senate campaign from Terry McAuliffe, a close friend of the Clintons.

Horowitz’s investigation, which began in Jan. 2017, also led to the demotion of Peter Strzok, the former deputy chief of counterintelligence at the bureau. In that role, Strzok led the FBI’s investigation into Russian interference in the 2016 presidential campaign. He was also a top investigator on the Clinton email probe.

by Eric Lieberman NEW YORK - Facebook announced Friday that it is suspending a data analytics firm that reportedly worked...