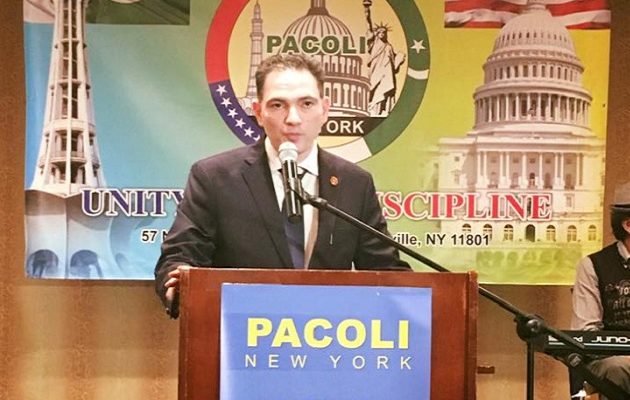 LONG ISLAND, NY – There have been three milestone “Firsts” which have been credited to Dillip Chauhan. For one, when Chauhan, now 47, who was born in India and immigrated to America in 1999, received the New York State and City Hall’s Political Rising Star 40 Under Award in 2007, he became the first person of South Asian ancestry to be so honored.

His second “First” might even appear more impressive.  When the United States Congress through a resolution sponsored by Congresswoman Grace Meng of the Sixth District in New York City declared November 12th 2016 as “Dillip Chauhan Day”, he became the first person in the history of the Sixth CD to receive such recognition. 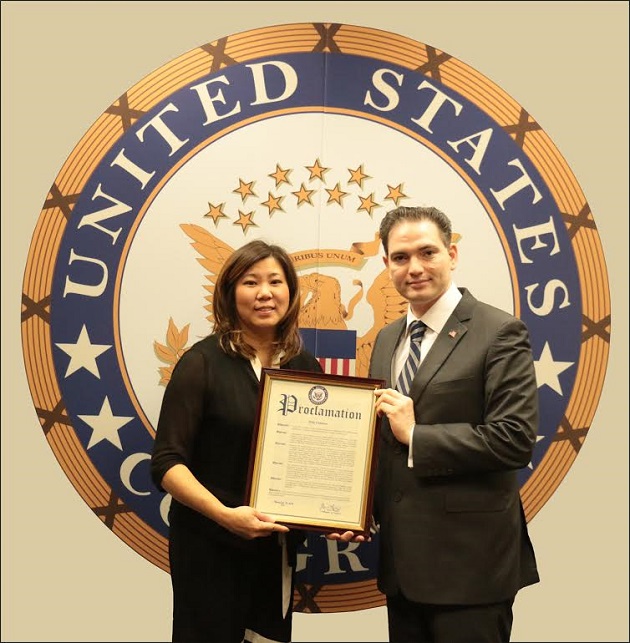 The third “First” was more of a closer to home event for Chauhan, who resides in Nassau County with his wife and their two daughters, aged nine and eighteen. On August 8th, 2017, Chauhan, who had been appointed by then Nassau Comptroller George Maragos as the county’s Director of Community Affairs two years earlier, was promoted to the position of Deputy Comptroller of Minority Affairs, making him the first person in the county to hold this title.

Chauhan, whom I interviewed last week, described the connection between these three “Firsts”. “These honors, which I feel sincerely privileged to have received, while not exclusively, have, in large part, been connected with my efforts to help further the already great success that a majority of South Asian American immigrants have already achieved”, he stated.

The “great success” of the South Asian American immigrants to whom Chauhan was referring reflects, he contended, their drive to achieve, as well the opportunity that America offers those who have come here from other nations. “Of all of the countries in the world, America provides, both for those born here and those who have come here from other countries, the greatest opportunity to succeed…. And the immigrants from America’s South Asian community have dedicated themselves to work very hard to take full advantage of that opportunity”, he stated. 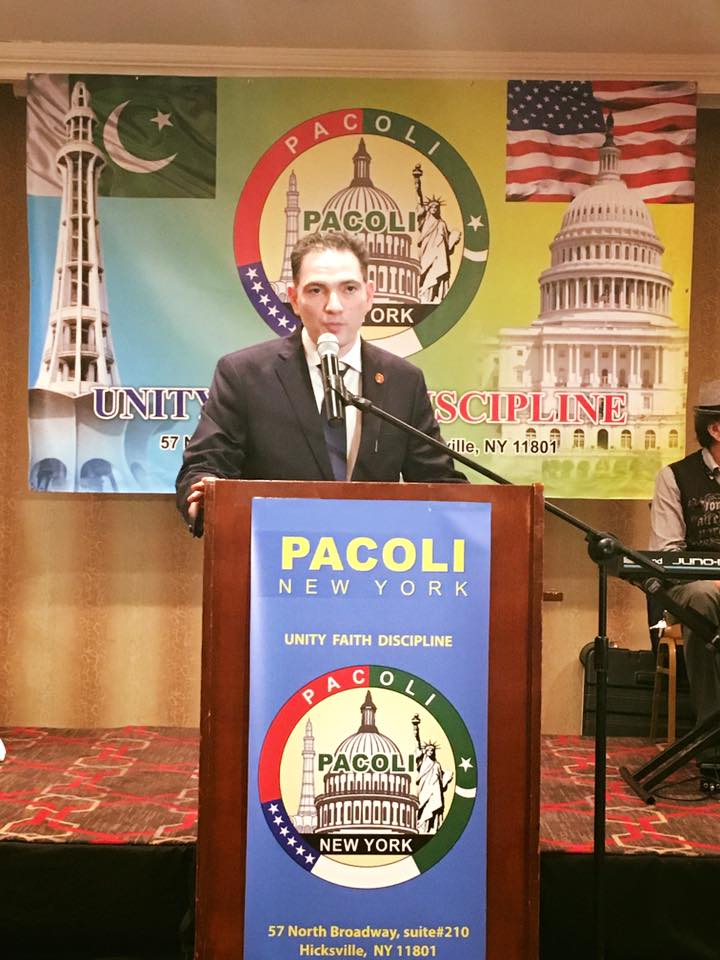 Citing data from recent federal government studies documenting the success of the three and a half million South Asian Americans living in America today, making them the third largest Asian ethnic group in America behind only Chinese-Americans and Filipino-Americans, Chauhan stated, “There are 120,000 doctors from the South Asian American community, many of whom have been recognized as among the most respected in the medical profession.”  “We also”, he elaborated, “have more than 200,000 men and women who are owners of small and large businesses. Combined these doctors and entrepreneurs employ more than four million workers- both foreign and American born- who have made a significant positive impact upon the American culture and economy. This success is also prevalent in Nassau County, which has a disproportionately large number of South Asian American business people and physicians.”

His job as the Nassau County Deputy Comptroller of Minority Affairs under then Comptroller Maragos gave Chauhan the opportunity to further grow South Asian owned businesses in Nassau, largely through a program known as MWBE (Minority and Women Business Enterprises Program). The program, he informed me, was created to use government resources to help facilitate business relationships between minority owned and female owned companies.

Chauhan said he believed MWBE would be a perfect fit for Nassau County, where there already existed large numbers of women owned and minority owned businesses.  “Through MWBE, I was presented with the wonderful opportunity to help expand already existing businesses, including those owned by South Asian American immigrants”, he stated.

The efforts on behalf of South Asian American business men and women actually pre-dated Chauhan’s jobs with the Comptroller (July 2015- December 2017). For ten years prior to being employed by Maragos, he was a business development consultant specializing in establishing marketing strategies for both large and small American businesses and major international corporations seeking to make commercial in-roads in South Asian Indian communities in the northeastern United States.

Chauhan explained how he utilized the relationships he developed with the owners and top executives of these businesses to develop new opportunities for South Asian American entrepreneurs and at the same time create jobs for people in their communities. “I helped explain to these business leaders that the best way to grow their own businesses in the South Asian American community was to build commercial relationships with business men and women in that community”, he recalled. “Most listened to that advice. As a result, their businesses and the businesses owned by South Asian Americans grew, and thousands of people from our community were hired to fill the many new high paying jobs which had been created.”

During the same period that Chauhan, who holds a Bachelor of Science Degree in Electrical Engineering, worked as a business consultant, found the time to take on new challenges, ranging,  from among many others, working as an advisor to the Association of Indian American Physicians, serving as a volunteer community relations development liaison for the year 2010 UN’s Millennium World Peace Summit and acting as an advisor to several  non-profit South Asian American based civic and religious organizations.

Chauhan said that he took great pride in being selected to these positions.  He noted, however, that he felt that serving as the advisor to these non-profit groups was probably the most challenging of them all, because it gave him the opportunity to provide assistance to those South Asian Americans, who unlike the majority of their brethren, are still facing difficulty in assimilating in America. “South Asian Americans are a tremendously successful people”, he said, “so it is sometimes easy for us to forgot that we have many newly arrived immigrants living in our communities who are facing difficult problems and need our help.

“I met one man’’, he offered as an example, “who had faced discrimination at his job based upon his [South Asian American] background.  I met others, who though possessing educational backgrounds and skills that should have made them highly employable, were unable to find employment that matched those skills and academic credentials. Most common of all was the concerns expressed to me by newly arrived immigrant parents who were finding enrolling their children in the right public school to be a very difficult process.”

Chauhan said that he was able to call upon the many elected officials and business leaders from both inside and outside the South Asian Indian community with whom he had developed positive relationships over the past years to provide help to these new immigrants. “I will not mention names because there have been so many, and I do not want to leave any one out. But when asked, they have been ready, willing and able to come to the aid of members of our community”, he noted.

Chauhan, whose father, three out of four brothers and six nieces and nephews still live in India (His mother passed away last year, and one of his brothers now lives in America), told me that he takes his wife and two daughters to visit them in India almost every summer. “I miss my family of course, so seeing them means the world to my wife, my daughters and me”, he stated. “My father”, he added “also keeps me updated on the political and economic circumstances taking place in India.”

His father should actually possess a special insight into the current events of his nation, through his longtime, on-going friendship with India’s Prime Minister Nerendra Modi. Chauhan recounted that he and his family were neighbors of Modi in the city of Gandhinagar, India for twenty years, beginning in the mid 1990’s. “We got to know him quite well and became family friends”, recalled Chauhan. “He was an extremely brilliant but still a very humble man, who we always knew would someday be elected to a very high elected position. So when he was elected Prime Minister [in April 2014], it was a time of celebration for my family, most of whom, including my father, still live in Gandhinagar and remain in contact with him.” 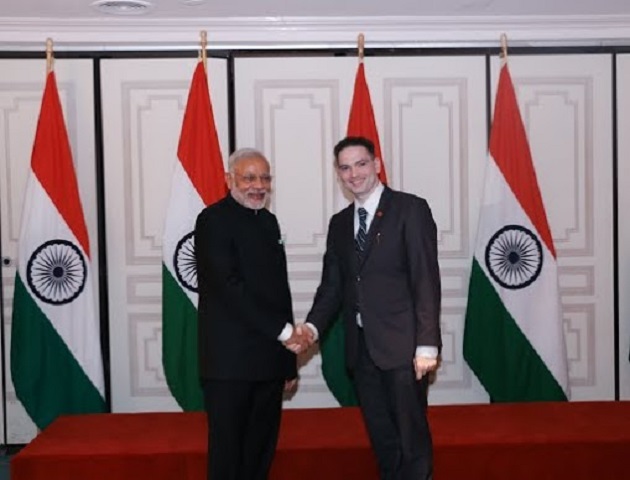 When Prime Minister Modi visited New York three years ago. Chauhan was given the opportunity to renew his own relationship with him. Arrangements were made for Chauhan to visit the Prime Minister privately in the Waldorf Astoria Hotel for a short, and, and as it turned out both a very friendly and important meeting. “First we talked about old times. How our families were doing. About mutual friends. Then we discussed the state of Indian immigrants in America. He was happy to hear how well most are assimilating. What a great honor it was for me.”

Sounds to me like a “Fourth, First” for Chauhan. 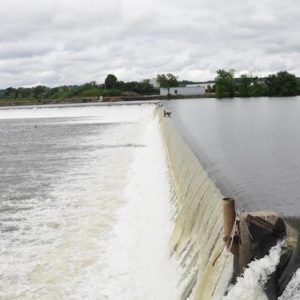 by Andrea Sears NEW YORK - The Environmental Protection Agency has delayed a decision on whether General Electric has properly...