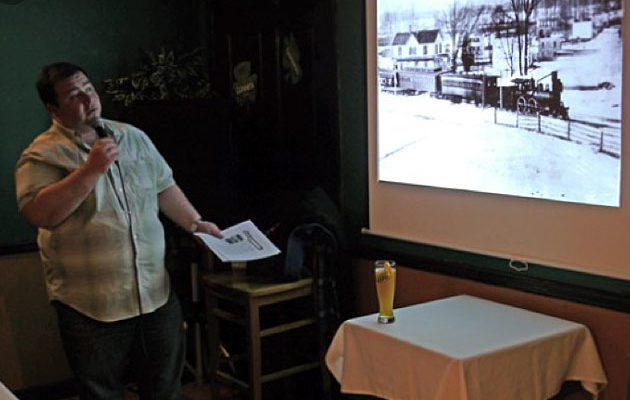 NEW YORK, NY – Jason Antos, whose six books on the history of Queens have made him one of the most well- known and respected authors as well as one of the most sought after lecturers on the history of the borough, attributes some of that success both to his very early interest in the Titanic and to his kindergarten teacher, Mrs. Bernstein, who encouraged that interest.

The author, whom I recently interviewed, explained to me, “I don’t know why, but when I was in kindergarten I became fascinated with the Titanic. My mother took me to the library, and I found a very short children’s book on it.  When I told Mrs. Bernstein, she said it was great that I was interested in an historical event and had me read the book to the class. Thanks to Mrs. Bernstein, I felt like a real historian.”

Antos, 36, told me, though, that his fascination with the Titanic ended around the time he reached the first grade. “Who knows how the mind of a six year old works”, said Antos, “But the interest I had in the Titanic transferred to my new interest, the history of Queens.” 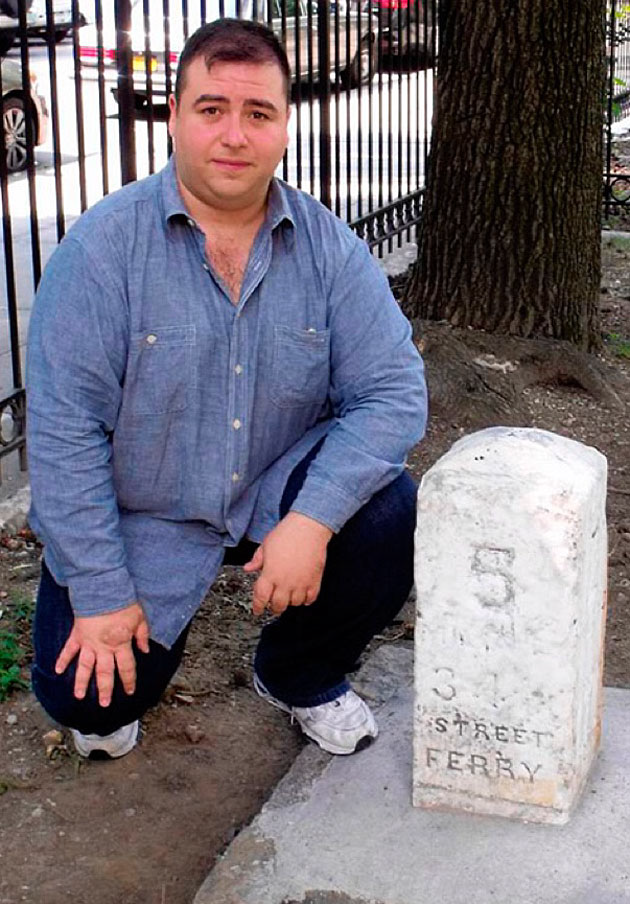 Antos posing before a colonial mile marker at the Queens Historical Society. This mile marker once stood at 82nd Street and Northern Boulevard in Queens.

From the first grade through his sixth grade graduation from PS 193 in Whitestone Queens, Antos, a lifelong resident of the borough (as you might have guessed by now), vigorously pursued that interest. “I was a conscientious student. So I made sure to complete my reading, math, science and current events homework assignments the minute I got home from school”, he recalled. “But once my homework was done, rather than turning on the TV, I spent the remaining three hours or so before going to bed reading children’s books and magazines on the history of Queens.”

That reading, which was to continue from junior high up and through his high school years, provided Antos with an enormous wealth of knowledge on the history of Queens, which, he recollected, he remained ready to share with family. “At the dinner table my parents, like most mothers and fathers, would typically discuss ordinary family matters like how my aunts, uncles, cousins and grandparents were doing”, stated Antos, an only child.

“While I was interested and concerned about my relatives of course”, he elaborated, “I would often change the conversation to the history of Queens. From those discussions with me, my parents learned, among what I believe were many other important local historical facts about the borough, that the first road in the entire world designed solely for automobile travel was paved in Hollis Hills, Queens back in 1908. Even if my parents were bored by such trivia, they loved me too much to show it.”

Antos would, I learned, be equally willing to share his knowledge of the history of the borough with his friends, who also became his de facto students “Without me, my friends, who listened to my history lessons intently, would have never known that a whole one mile island off Rockaway Beach {in Queens}, known then as Hog Island,  was wiped away forever from a devastating hurricane back in 1893, or that there is an old Civil War fort located in the public park section of Fort Totten {in Bay Terrace Queens} built in 1862 for the North to monitor the ingress and egress of ships in the East River”, Antos stated.

During his college years at CW Post from 1999 until his graduation in 2003, Antos regaled his classmates with similar historical facts and anecdotes. From 2004- 2006, he did the same for his graduate school classmates at University of Miami (from which he received an MA in journalism). However, it was to be a visit to a local Queens book store during a trip back home during the University of Miami’s 2005 Christmas break that would serve as the impetus and inspiration for Antos’ then soon to be launched career as an author of the history of Queens. “I happened to be at a Barnes and Noble and saw a book on College Point. I had a light bulb moment”, Antos recalled. “I had never before understood that people would be interested in a book on their local neighborhood…. I had always dreamed of writing a book, and when I saw the book on College Point, I became convinced that there would be an audience for other books covering other Queens neighborhoods.”

Shortly later, learning that the same publishers of the book on College Point were conducting an open call for submissions of book proposals, Antos quickly constructed and then forwarded one on his own Queens neighborhood of Whitestone. When the publishers informed the euphoric soon to be new author that they had accepted his proposal, Antos, who was studying an average, he told me, of four hours daily, knew he had to find the time and energy to work on his book. “Juggling both my graduate school work and writing my book was daunting at first” he stated. “But as the saying goes, ‘ where there is a will there is a way.’’’

Antos evidently possessed both, as he completed the book which he titled “Images of America: Whitestone“, by September 2006 – within 8 months after he started- and in time for it to be officially released to the public on October  18th of the same year. The book, which chronicles in words and pictures Whitestone’s history from its founding as a trading port in 1645 by the Dutch to its contemporary status as a highly affluent residential community, sold an incredible one thousand copies within its first two weeks of publication, making the then 25 year old Antos something of a celebrity throughout Queens.

“I  received countless emails from people, mostly – but not all from Queens – thanking me for writing a book about a great community in a great borough. To be paid by the publisher and to receive praise from my fellow Queens citizens for doing something I loved was amazing”, stated Antos.  There were to be five more books on that “great borough” that he was to write.    Following the same 125- 150 page, picture/word format as the first, his books “Images of Baseball: Shea Stadium” (2006), “Then and Now: Queens“ (2009), “Then and Now: Flushing” (2010), “Images of America: Jackson Heights“ (2012), and “Images of America: Corona” (co- authored with Dean Theodosiou, 2015) have sold thousands of copies from primarily Queens book stores and- a great honor for any author, have been placed on the shelves of libraries throughout the borough.

Antos’ career has not been restricted to solely writing books. In 2010, he was hired first as a reporter and two years later became and currently works as the editor of the local newspaper the Queens Gazette (full disclosure: QG is one of the news outlets which publish my column); since 2015, he has been employed by Queens Assemblyman Edward Braunstein as a part time community liaison; and for the past four years, he has served as a member of the board of the Queens Historical Society.  Such items on his resume might explain why two years ago Queens United States Congresswoman Grace Meng honored Antos with a Congressional Proclamation, citing his contributions to the study of the history of the borough.

Yet, Antos appears to remain unimpressed by his own accomplishments “It is the great people who live in Queens today, and those great folks who have lived, worked, died and been buried here over the past 400 years who deserve to be honored and praised”,  he told me,  “I am just a very humble writer of local history trying my best to tell their story.”

Mrs. Bernstein would, I believe, be proud of her former student.

Editor’s Note:  Jason Antos is currently working on a still untitled book on the history of the neighboring Queens’ communities of College Point and Queens Village. He expects to have the book completed before the finish of the coming year. 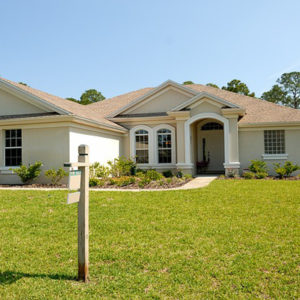 LONG ISLAND, NY - Despite the fact that the national economy is steadily improving, money issues are still paramount among...