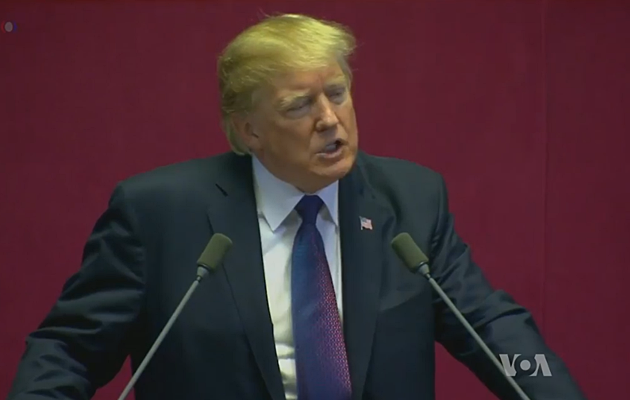 President Trump Delivers Strong Warning To North Korea: “Do Not Underestimate Us, Do Not Try Us”

Delivering a rare address before the South Korean National Assembly, Trump issued a stern warning to North Korean dictator Kim Jong Un, as well as a message of hope should he choose to change course. “Do not underestimate us. Do not try us,” the president warned. “America does not seek conflict or confrontation, but we will never run from it. History is filled with discarded regimes that have foolishly tested America’s resolve. Anyone who doubts the strength and determination of the U.S. should look to our past.”

“The regime has interpreted has interpreted America’s past restraint as weakness. This would be a fatal miscalculation,” he explained, asserting “this is a very different administration than the U.S. has had in the past. We will not be intimidated.”

“Now is the time for strength. If you want peace, you must stand strong at all times,” Trump stated before the South Korean parliament, advocating peace through strength. He stressed that the world cannot “tolerate the menace of a rogue regime that threatens the world with nuclear devastation,” making it clear to countries like Russia and China that have long enabled the North Korean regime that the weight of whatever comes of this crisis will be on their conscience if they fail to act to resolve this situation.

During his speech, the first U.S. presidential address before the National Assembly in over two decades, the president issued a message directly to Kim.

“The weapons you are acquiring are not making you safer,” Trump said, referring to Pyongyang’s tireless pursuit of nuclear weapons and ballistic missiles to deliver them to distant shores. These weapons are “putting the regime in danger. Every step you take down this dark path increases the peril you face.”

“North Korea is not the paradise your grandfather envisioned, it is a hell that no person deserves,” Trump stressed to the North Korean leader. “We will offer a path to a much better future,” the president added, calling for an end to North Korean aggression and weapons development, as well as the complete and verifiable denuclearization of the Korean Peninsula. Until that day comes, Trump explained, the U.S. and its allies will face this challenge with strength.

“We stand strong and alert,” Trump said. “Our eyes stay fixed on the North.”

Trump received a standing ovation from South Korean lawmakers after his speech, which reviewed the modern history of the Korean Peninsula — specifically the rise of the South and the fall of the North — and set a course for a stronger U.S.-South Korean alliance standing firm before a growing North Korean threat.

Having wrapped up his visit to South Korea, Trump will soon make his way to China, where he is expected to press Beijing to increase pressure on a belligerent Pyongyang. 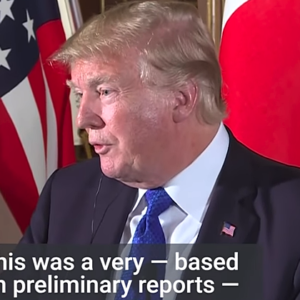 by Joshua Gill WASHINGTON - President Donald Trump said the church massacre in Sutherland Springs, Texas was not a gun problem,...