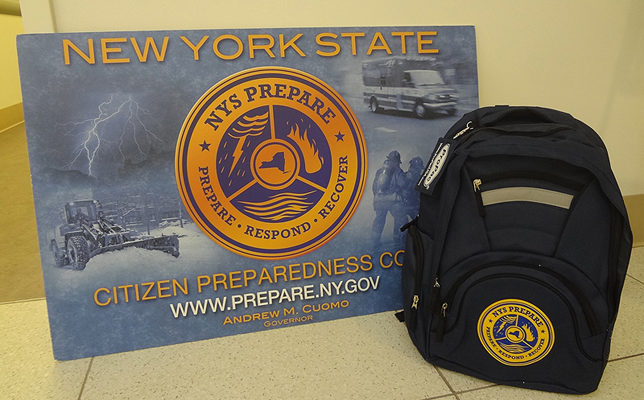 LONG ISLAND, NY – In a disaster the likes of 2012’s devastating Superstorm Sandy, one of the greatest detriments to morale to those caught in the middle can be the feelings of utter helplessness and the loss of control; however, at Westbury’s “Yes We Can” Community Center recently, a new program instituted by New York State is aiming to give that sense of control back to the people it was taken from.

The Citizen Preparedness Corps is program that was established by Governor Andrew Cuomo after the events of Hurricane Irene and Superstorm Sandy; the intent is to train New York residents on how to be self-reliant in an emergency situation, according to Captain Rafael Castillo of the New York National Guard, who headed up an informational lecture and Q&A session at the Community Center that drew a packed house.

“Governor Cuomo got all the agencies together from Division of Homeland Security and Emergency Services, the Office of Emergency Management, and the National Guard, and this presentation was put together in order to get our citizens to rely less on emergency personnel if an emergency strikes,” he said. “Our goal is to instruct citizens on how to sustain themselves for up to seven-to-ten days…during Sandy we noticed that many people had lost power for up to ten days or more, and resources were limited.” 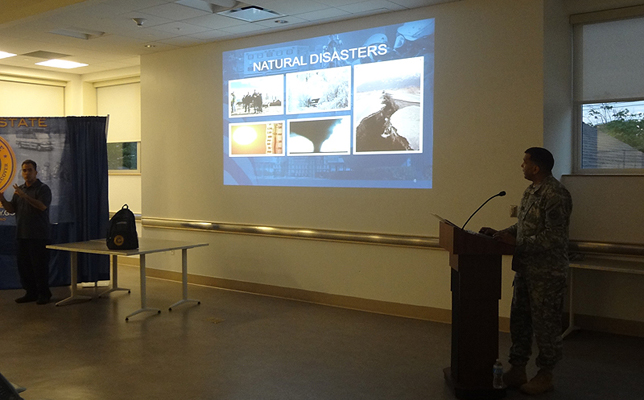 Nassau County Legislator Siela A. Bynoe, D-Westbury, who was in attendance at the event, noted that with the aftermath of Sandy, families had to go a long duration without hot water, lights, electricity, and heat; this evening, they would be trained on how to manage their households in the event of an emergency, also be provided with the tools to assist in doing so in the form of complimentary survival gear given out at the end of the evening.

“During emergencies, we find that First Responders have their hands full,” she said. “We feel that if we are better able to equip our community residents to take care of themselves in the event of an emergency, it better allows the Responders to go to those who are in the most need. This is an opportunity for people to feel empowered during emergencies, as if they have some control.”

Captain Castillo noted that three main disaster categories would be covered at the evening’s meeting- Natural (hurricanes, tropical storms, flooding, snow), Man-Made (terrorism, failures of building structures or bridges), and Technological (blackouts, communication failure). However, he said, there was one key element to surviving that each of these calamities shared.

“Be well-prepared, and be prepared in advance,” he said. “Don’t wait until a day or two before the event happens or even the day of…start now, but if an evacuation notice is given, get out as soon as possible.” 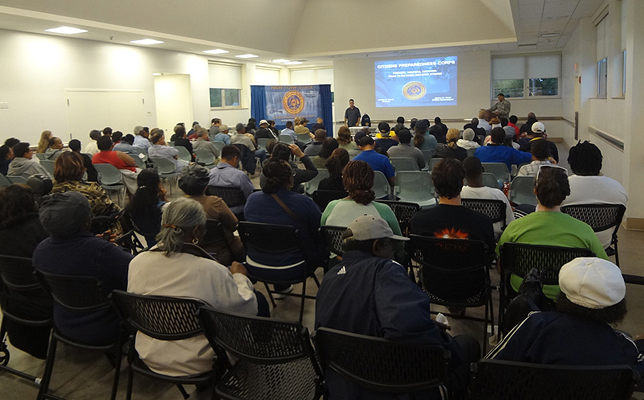 The Citizen Preparedness Corps is program that was established by Governor Andrew Cuomo after the events of Hurricane Irene and Superstorm Sandy. Photo Credit: Chris Boyle.

The primary means of preparation covered at the event was in the form if what is known as a “Go Kit,” which typically consists of a portable container pre-filled with vital survival gear; attendees at the event were presented with their own Go Kits in the form of a backpack provided by New York State. Each backpack included a first-aid kit, goggles, pocket radio with batteries, food bars, an emergency blanket, and other items to help citizens in the immediate aftermath of a disaster, according to Captain Castillo.

“The ‘Go Kits’ contain basic items that will allow people to be better prepared…however, the kits should be modified by each individual to suit their own individual needs,” he said. “In other words, if you wear eyeglasses or take specific medication, you should include spares in your Go Kit, and you should build a Go Kit for each member of your family. Each kit should be robust and contain enough food and water to last seven-to-ten days. Also include medical and hygiene supplies, tools, a change of clothes, a hand-crank radio, and an entertainment item such as a deck of cards.” 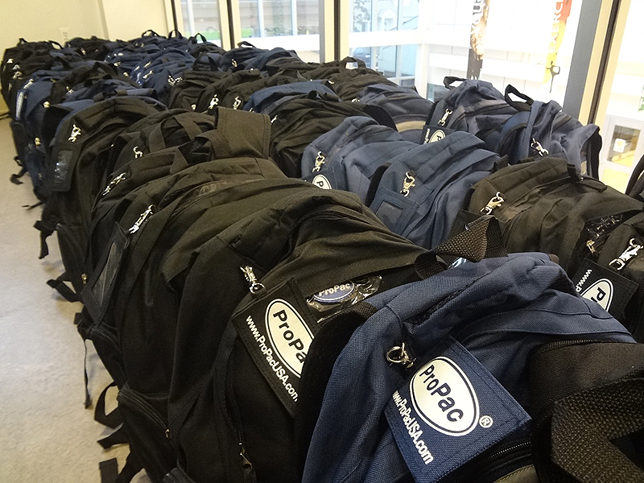 The primary means of preparation covered at the event was in the form if what is known as a “Go Kit,” which typically consists of a portable container pre-filled with vital survival gear. Photo Credit: Chris Boyle.

One handy tip Captain Castillo gave in the event of a worst-case situation: don’t rely on your cell phone. Make sure that you keep a written record of your phone’s contact list in case you are unable to recharge your phone and fund yourself using a landline telephone or other means to get in touch with loved ones.

New York State Assemblyman Charles Lavine (D-Glen Cove) made an appearance at the Citizen Preparedness Corps event in Westbury, and spoke about how impressed he was at how in-depth and informative it was.

“I’ve been involved with several other presentations of this program, which is really outstanding… Captain Castillo is really an expert in emergency management,” he said. “Everyone here if going to learn how to protect themselves against the ravages of weather or whatever else comes along.” 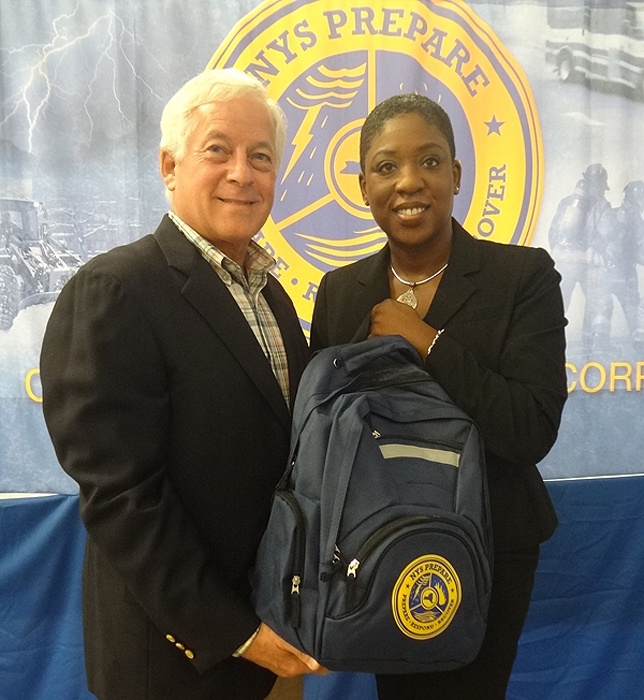 Carol Schadoff of Westbury had recently relocated from an especially hard-hit area right before Superstorm Sandy struck, and was spared the worst; however, the damage sustained by some of her former neighbors prompted her to attend the Citizen Preparedness Corps event nonetheless.

“I used to live down by the water, and I got out of there before Sandy, and I saw a lot of devastation that people I knew had suffered,” she said. “So, I came here tonight because whatever you can learn is a plus, and I feel that I’ve received a great deal of important information about what to do in the event that the worst happens.”

Local resident Barry Ellis and his family also attended the event; Ellis said that he just wanted to make sure that his family was safe, should another Sandy – or worse – come along in the future.

“Honestly, sometimes it’s a little scary when you think about how little control human beings can have when faced with nature and the elements, and that’s why we’re here tonight…to learn how we can best prepare,” he said. “So far, I’m quite impressed with what I’ve learned, and going forward, I will follow these instructions that National Guard Captain has given and will likely sleep all the better for it, knowing that my family is better prepared for the worst.”

For more information on the program and emergency preparedness, visit www.nyprepare.gov. 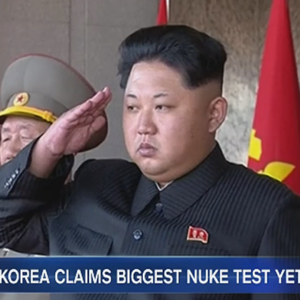 by Ryan Pickrell WASHINGTON D.C. - North Korea has been quiet lately, but the regime is threatening a serious provocation. While...