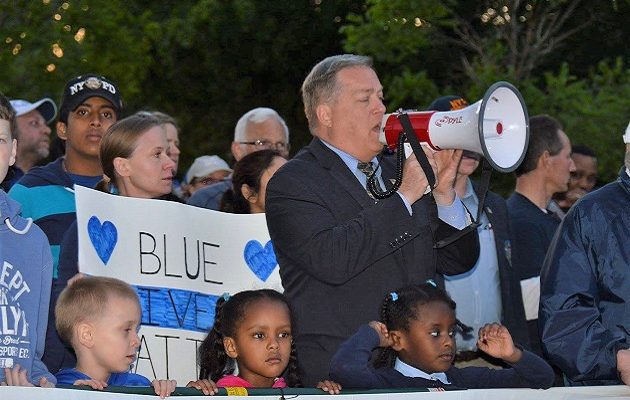 Concannon, who retired as an NYPD captain more than ten years ago in a career that spanned the Koch, Dinkins, Giuliani Administrations and a portion of Bloomberg’s, explained his charge that his opponent has lacked independence when dealing with the mayor. “There have been a total of 1682 bills, proclamations and resolutions that the mayor has pushed for in the city council during Grodenchik’s time there” he stated. “Of those, my opponent has voted to approve 1671, which comes to a staggering 99%.”

Concannon, 61, married and the father of three and grandfather of two, contended that this close legislative partnership between de Blasio and Grodenchik has proven to be “disastrous”. Concannon cited three out of what he claimed were numerous examples of poorly conceived legislation which has either already passed into law or is in the process of becoming one, supported by the mayor and Grodenchik. 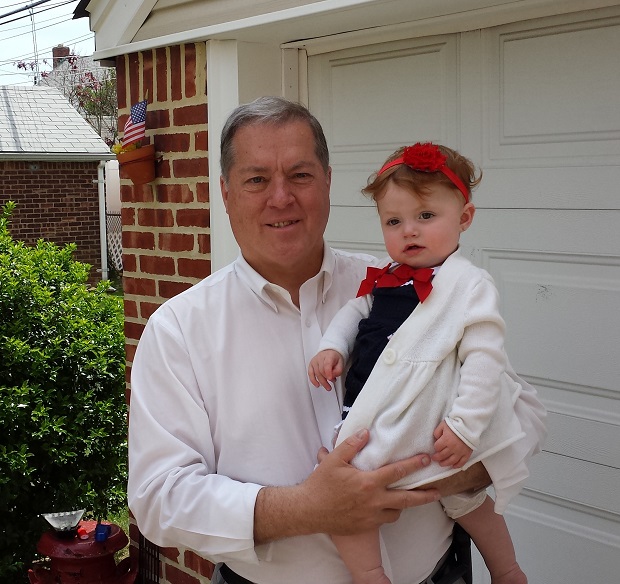 The first centered on the recent rise in the city’s real estate tax rate. Noting that this current year the city has increased the assessments on private homes, condos and coops, reportedly increasing taxes for New Yorkers who own such properties, Concannon stated, “Rather than transparently raising taxes and paying the political price for it, de Blasio, along with his sidekick {Grodenchik} attempted to hide what they were doing by raising assessments as a way to covertly increase taxes for property owners. I believe, however, that New Yorkers are too smart to be fooled by such an underhanded tactic.”

The second concerned the mayor’s proposal to open approximately 90 new homeless shelters in primarily residential neighborhoods in all of the city’s five boroughs. While he has argued, and an almost unanimous majority of advocates for the homeless have agreed, that his proposal presents the best plan to solve the escalating homeless crisis, it has been met throughout the city with strong opposition from many affected community residents who through their spokespersons and leaders have argued that opening such shelters could very likely result in a rise of crime in their neighborhoods.

Three such homeless shelters, which were actually hotels converted into such dwellings, can now be found within the borders of the 23rd CD in the predominately residential Bellerose, Queens. Concannon, who over the past several months has led hundreds of local residents in a series of public protests against these shelters, contended that placing them in residential areas can have dangerous consequences, stating, “If the mayor and his pal {Grodenchik} wanted to make life less safe for people living in residential neighborhoods and otherwise negatively impact upon the quality of their lives, opening homeless shelters in their communities would be just where they would start.” Concannon then added that, as is the case in Bellerose, converting hotels into homeless shelters not only creates problems for the residents of the community but also fails to meet the basic needs of the homeless. “These [hotel} converted shelters lack adequate space for families and are without cooking facilities”, he stated. “This is anything but a humane solution on how to provide housing for the homeless.” 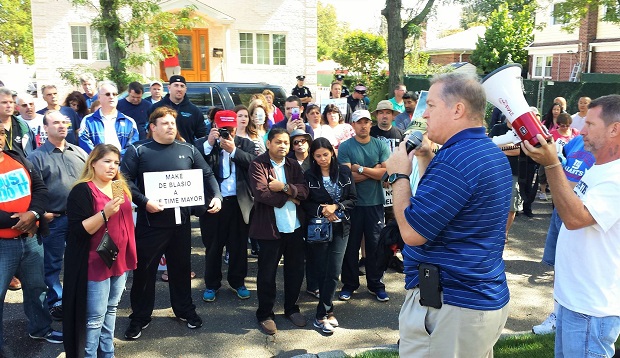 The final area of dispute over legislation between Concannon, the mayor and Grodenchik also centers around safety concerns and quality of life issues. This past June, the mayor announced his proposal to close Rikers Island- a vast jail complex, incarcerating approximately ten thousand inmates at a time, which has been plagued for decades with high numbers of assaults committed by inmates against correction officers, civilian employees and fellow inmates; de Blasio’s plan calls for replacing Rikers with smaller jails, which, like homeless shelters, will be situated throughout the five boroughs.

The mayor has argued, and his supporters on the city council including Grodenchik have agreed, that the mayor’s plan titled, “Smaller Safer, Fairer: A Roadmap to Closing Rikers Island”, will make city jails safer, without compromising the well- being of the residents living in the neighborhoods where they will be situated.

Here again, Concannon took sharp issue with the de Blasio and by association with Grodenchik. “This will make the communities {in which the jails will be housed} far less safe”, the former police captain stated. “Let’s put political correctness aside for a moment. Not all, but many of the inmates {jailed at Rikers} are awaiting trial for murder, rape, robbery and other types of serious crimes…. Many of them are members of dangerous gangs. {So} it is only common sense to assume that some of the people who would come to visit these inmates could present a very real danger to these communities. Don’t they [de Blasio and Grodenchik} understand the harm this can cause to the people in these neighborhoods?” 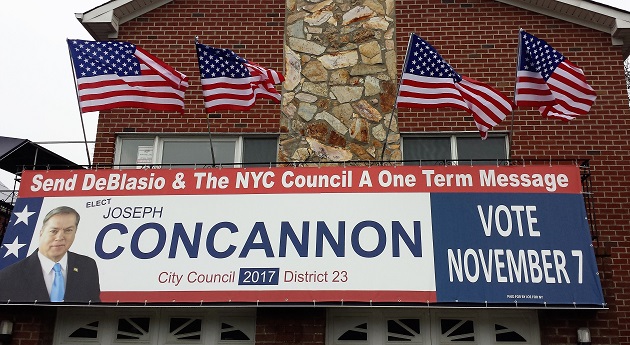 In addition to criticizing de Blasio and Grodenchik for supporting what he regards as poor legislation, Concannon blasted both of them for failing to use the city council to provide a legislative solution to a crisis centering around the Creedmoore Psychiatric Center, located in Queens Village in the mid-point of the district. Creedmoore, which provides inpatient and outpatient psychiatric services, has come under criticism from residents and local merchants. They have complained to the police, local officials and the media that a large number of the center’s patients- including some with violent criminal backgrounds- have recently been given greater freedom to roam unsupervised throughout Queens Village, resulting in an upsurge in aggressive panhandling and in a rise of crime in this working- class community.

“It is very unfortunate that with the dangers Creedmoore is presenting to the people in Queens Village, de Blasio and the current councilman {Grodenchik}, who never fail to come up with legislation that will make New Yorkers less safe, are unwilling to come up with legislative actions that would provide help to the beleaguered citizens there”, Concannon stated.

Concannon told me that in addition to his differences with de Blasio and Grodenchik over their legislative agenda, there are what he referred to as “important moral issues” with which they are in disagreement. “Let me be blunt”, said the candidate. “It is immoral for the mayor to refuse to denounce a terrorist. It is also immoral for the mayor to allow an Israel hating anti- Semite to be honored as a speaker in a city university institution…. And I want to know why my opponent has failed to have the courage to question the mayor on these moral outrages.”

Concannon was first referring to Oscar Lopez Rivera, a convicted terrorist who had been implicated in dozens of terrorist attacks in the United States, including the bombing of Fraunces Tavern which left 4 dead and 43 injured in lower Manhattan on January 24th 1975. This past June, despite a whirlwind of protests from, among many others, pro-police and pro-veterans organizations, as well as protests from surviving family members of the victims of Fraunces Tavern and other terrorist atrocities, Rivera was selected to be honored as the “National Freedom Hero” at the Puerto Rican Day Parade held that month. As a result of these protests, Rivera’s award was eventually rescinded and de Blasio also eventually spoke out against honoring him. The mayor, however, drew heavy fire from his critics, including Concannon, who charged that he had waited far too long from taking what should have been an immediate decision to renounce the proposal to honor Rivera. 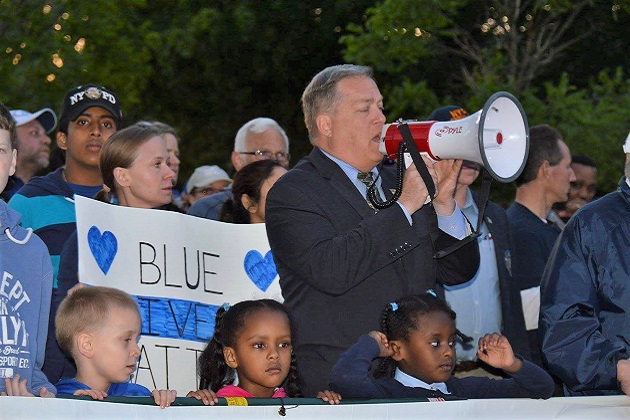 He was next referring to the selection of Linda Sarsour- a close de Blasio ally and the former leader of the Arab-American Association of New York, who has a long history of making anti-Israel and pro-Sharia statements- as the commencement speaker at CUNY’s Graduate School of Public Health, also this past June. Sarsour has, as one example of her long list of anti- Israel diatribes, stated, “Nothing is creepier then Zionism.” Sarsour has also made statements suggesting her love of Sharia law equals her hatred of the Jewish state. “Sharia Law”, she recently proclaimed, “is reasonable {because} suddenly all of your loans and credit cards are interest free.”

Concannon stated that if he is elected to the city council, people such as Sarsour and Rivera will be facing a strong adversary there. “I will use the platform of the city council to deliver the message that the days of honoring terrorists and anti-Israel anti-Semites have ended”, he promised.

As recent history in the district indicates, however, Concannon appears to be facing an uphill battle in his bid to unseat Grodenchik: in 2013, Concannon, garnering only 14% of the vote, was defeated by then Democrat incumbent Mark Weprin; in 2015, in a special election held to replace Weprin, who left the city council to take an administrative position in the Cuomo Administration, Concannon lost to his current opponent, Grodenchik, gathering, though, a markedly more respectable 37.5% of the final tally.

Concannon told me that he views this almost 25% increase in his vote share over the past two elections rather than his two defeats as predictors for the outcome in November. “The trends”, he contended, “over the past two elections are moving in my direction.’’ He then added, that his chances of winning will be helped by the voters’ dissatisfaction with the “mayor’s terrible policies and their awareness that the current councilman has fully supported those policies. Which makes me believe I can win.”

We will know whether or not that belief was well founded come election day and night, November 7th. 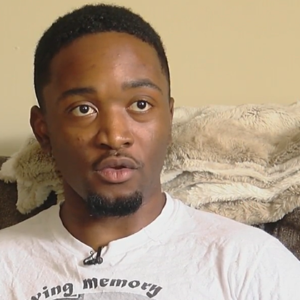 by Amber Randall CHATTANOOGA - A Tennessee gym fired an employee Monday morning after an employee decided to sit during...