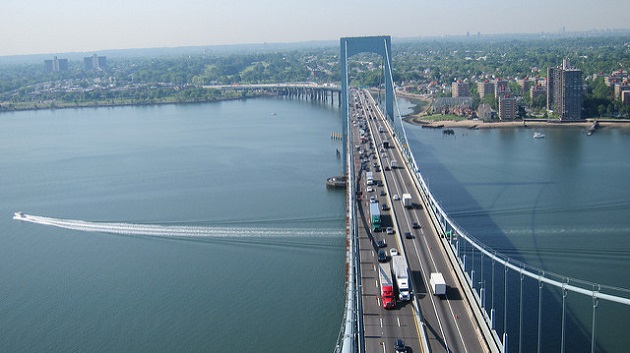 NEW YORK – Governor Cuomo today announced that the first span of the new Governor Mario M. Cuomo Bridge will open on August 25th, when westbound traffic will begin moving onto the first span. The new bridge, on track to open in 2018 and on budget at $3.98 billion, is one of the biggest active bridge projects in the nation and the largest in the history of the New York State Thruway Authority.

“The opening of the first span of the new Mario M. Cuomo Bridge next month is a clear message that after decades of stagnation, New York is building our transportation infrastructure better, safer and more efficiently than ever,” Governor Cuomo said. “This major milestone in the project to replace the aging Tappan Zee Bridge will be the first step in alleviating congestion for commuters while offering a state-of-the-art link over the Hudson River, built to last for generations to come.”

Additionally, Governor Cuomo also announced that the Federal Aviation Administration approved the $4 billion, 37 gate Delta facility at LaGuardia Airport, the final component of the transformation of LaGuardia into a completely rebuilt, unified 21st century airport, and the U.S. Department of Transportation approved a more than $500 million loan for the Moynihan Train Hall redevelopment. Governor Cuomo also announced that cashless tolling will be complete on all MTA bridges and tunnels by the end of 2017, already having reduced commuters’ travel time by up to nine hours since January.

The New Governor Mario M. Cuomo Bridge project is recognized across the nation for its iconic design, including by President Barack Obama, who put the bridge at the top of his list of critical infrastructure priority projects. The new bridge will connect Westchester and Rockland counties and serve as the main conduit between Upstate and the New York City metropolitan region. In all, more than 6,300 people have contributed to the Governor Mario M. Cuomo Bridge project thus far, totaling more than 8 million hours of man power. At the Governor’s direction, the Thruway Authority has managed this project since 2013 with two fundamental objectives, to first open the bridge in 2018, and second, finish the bridge at or below the budgeted cost of $3.98 billion.

On Friday night, August 25, the Thruway Authority and Tappan Zee Constructors will shift four lanes of westbound/northbound traffic to the new span. The second step of moving eastbound traffic to that span will begin later this fall. The traffic will be separated by a jersey barrier and that traffic pattern will remain in effect until the second span is complete, and the bridge with both spans opens in 2018.

Last week, the FAA announced environmental approval for the new $4 billion, 37-gate Delta facility, the final component of the transformation of LaGuardia into a state-of-the-art, unified airport. The Port Authority has committed a fixed amount of no more than $600 million to the Delta project, with the airline providing $3.4 billion and assuming responsibility for any cost overruns. All of the new airport terminal facilities, including the Delta project, will be located closer to the Grand Central Parkway as part of the new unified airport design, providing significantly more airfield space. The Delta work will begin later this summer. The redevelopment of the Delta facilities is part of the overall LaGuardia Airport project that broke ground in June of 2016 on the construction of the new overall roadway configuration and on the LaGuardia Gateway Partners passenger terminal concourses on the western half of the new airport.

Over $500 Million for Moynihan Train Hall

Governor Cuomo also announced the U.S. Department of Transportation approved a Transportation Infrastructure Finance and Innovation Act (TIFIA) loan of $537.1 million for the Moynihan Train Hall Redevelopment Project. The new Moynihan Train Hall will feature a new spectacular 92-foot high skylight to be built above the building’s historic and architecturally-dramatic steel trusses. A total of nine platforms and 17 tracks will be accessible from the Train Hall. The Train Hall will provide direct connections to the Eighth Avenue Subway, and create direct access to the train station from 9th Avenue for the first time, bringing unparalleled regional transportation options within convenient reach of the booming Hudson Yards and Far West Side areas.

The Moynihan Train Hall is part of the transformational Pennsylvania Station-Farley Complex announced by Governor Cuomo in September 2016 to dramatically modernize, upgrade and redesign America’s busiest transit hub into a world-class facility for the 21st century. The Pennsylvania Station-Farley Complex also includes a comprehensive redesign of the LIRR’s existing 33rd Street concourse at Penn Station and an extensive renovation to the adjacent Seventh and Eighth Avenue subway stations. The plan will include nearly tripling the width of the 33rd Street Corridor, which is among the busiest sections of Penn Station and stretches along the station’s lower level from Seventh to Eighth Avenue. Other improvements include upgraded lighting and wayfinding, and digital screens to convey information and create a modern passenger experience.

The new Moynihan Train Hall is scheduled to be complete by the end of 2020. Renderings of the new Penn-Farley Complex are available here.

Cashless Tolling on all MTA Bridges and Tunnels

Cashless Tolling will be complete on all MTA bridges and tunnels by the end of 2017. Most recently, cashless tolling began on the Verrazano-Narrows Bridge on Saturday July 8, joining the RFK Bridge, Henry Hudson Bridge, Hugh L. Carey Tunnel, Queens Midtown Tunnel, and Rockaway Bridges (Cross Bay and Marine Parkway).

The following bridges will go cashless tolling this fall:

At each bridge, sensors and cameras are suspended over the highway on structures known as “gantries.” These sensors then read E-ZPass tags and take license plate images, so vehicles no longer have to stop and pay the toll. Vehicles with E-ZPass tags are automatically charged, and vehicles without E-ZPass have their license plate recorded and a bill is mailed to the registered owner of the vehicle. E-ZPass tags should always be mounted and never waved to ensure that the tag is properly read and that the driver’s attention is not diverted from crossing the facility safely. Motorists can sign up for an E-ZPass here.

Cashless tolling is projected to save commuters up to 21 hours of drive time every year. It also reduces emissions and significantly decreases the amount of fuel burned by drivers, who will no longer have to stop and wait to pay tolls. This will conserve approximately one million gallons of fuel and save roughly $2.3 million in aggregate fuel costs each year.

An Olympic Lunge for Local Fencer 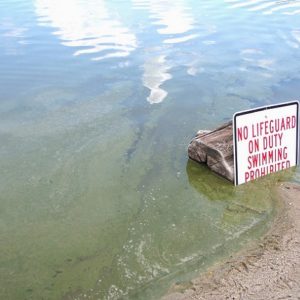 NEW YORK - The following beaches are closed to bathing due to the finding of bacterial levels in excess of acceptable criteria: According...