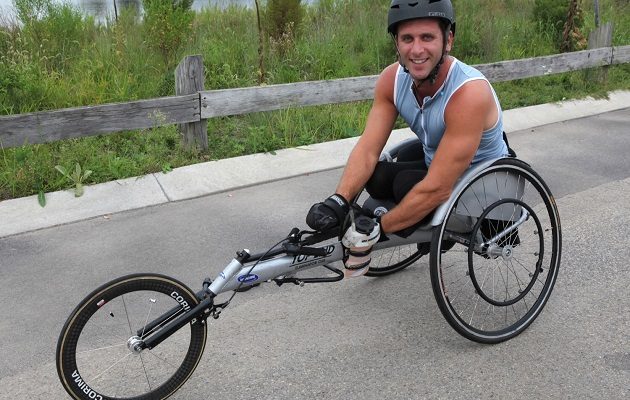 NEW YORK – In the early evening of May 12th 1999, Daniel Tratt, then a twenty- year old junior at SUNY Binghamton, went out bar hopping with a group of his fraternity brothers to celebrate the completion of their final exams. It was a night that was to change his life forever.

Daniel, who had become a heavy drinker soon after entering college, became so drunk that night that he tumbled off a handrail of the fourth floor of his Binghamton apartment building, falling 23 feet to the pavement below. As a result of the fall, Daniel suffered a traumatic brain injury and paralysis from the waist down.

The story of Daniel Tratt, whom I interviewed last week in his home in Westchester, is not, however, a tale of tragedy, but rather an inspirational saga of a courageous young man’s winning battle to overcome adversity, enabling him to eventually live an independent, and as we will see later, a wonderful loving and giving life.

The battle, though, began on a difficult note, when a month after the accident, Daniel was transferred from Wilson Memorial Hospital in Binghamton to Mount Sinai Hospital in New York City, where he began a physical rehabilitation program. “I was trying very hard to adapt to my new circumstances and commit myself to doing the best with my physical therapy,” he stated. “However, I had become confused and depressed, and so my doctors had to transfer me to a psychiatric ward in the hospital to be treated for clinical depression.”

With the support of his large family, living in nearby Westchester, as well, Daniel told me, as a number of very special doctors, nurses and other care providers at the hospital, he was able to overcome his depression and return to his rehabilitation program by early September. Daniel’s doctors, though, believed the best place for him to resume that rehabilitation was at the Northeast Center for Special Care (NCSC), so, he was transferred there at the end of the month. Located, in Kingstown New York, NCSC had just opened a new treatment center specializing in treating patients with spinal and brain injuries.

It was while at NCSC that Daniel recovered from the brain injury. “Regaining the full use of my cognitive ability brought me back to the world…. And as I saw other patients in the hospital with similar injuries to the brain still unable to recover, my heart went out to them, and it made me realize how truly fortunate I had been to be able to recover from such a serious injury,” he stated.

It was also while at NCSC that Daniel met a man who was to change his life. “I was assigned,’’ he recalled, “a hospital social worker named Jim Cesario, who was in a wheelchair himself as a result of a car accident in the mid 1970’s. Jim, who is old enough to be my father,” Daniel continued, “drove a car, went to work every day and was able to independently navigate through life’s daily chores and demands. So Jim, whom I still stay in touch with, became my mentor, role model and close friend. With him as my inspiration, I was able to gain my own independence, and become ready and prepared to resume living my life to the fullest.” 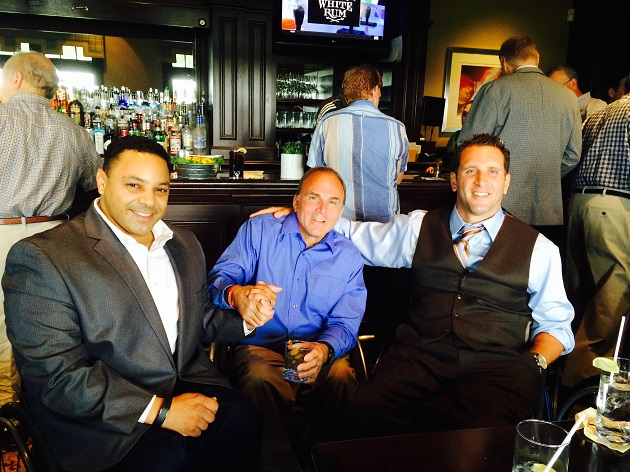 Upon his release from NCSC in October 2000, Daniel was to begin to do just that, and arguably even more. Within the following four years, he was to move into his own apartment in Westchester, earn a BA and later an MBA from Pace University in neighboring Pleasantville, spend a post MBA term taking courses at Sydney University in Australia, and begin his now still current career as a New York City secondary school special education teacher.

Referring to his special education classes, mainly composed of students with severe forms of autism, Daniel stated, “I have gained tremendous satisfaction as I have seen my students over the years achieve goals in their social emotional and educational development that might to some might once have seemed unachievable. “I feel,” he continued, “seeing me coming to work every day in my wheelchair served as a real-life example to them of the importance of never quitting and never giving up.”

Daniel told me that the satisfaction he received from working with children with special needs, coupled with his desire to transform his accident into a means to help others, led him to begin a new undertaking. Starting back in May 2005 and continuing to today, Daniel on his free time became a volunteer guest speaker at public and religious grade, middle and high schools throughout the tri- state area; he also speaks at colleges, including, Binghamton University. While Daniel adapted the language and subject of his speeches to the age of his specific audience, his message remained the same to all.

“To my younger audiences I speak about how people with physical disabilities are, other than those disabilities, no different than they are, and like all people need to be treated with kindness and respect. To my older audiences I speak about the dangers of drugs and alcohol and succumbing to negative peer pressure,” stated Daniel. “But the two main messages I try to convey to all of my audiences are the same. The first is something of a warning: I stress people must take responsibility for their own actions and behavior. The second is meant to be purely motivational: I simply say that ‘if you believe in yourself and work very hard, you can accomplish almost anything.’’’

For Daniel, those last fourteen words foretold how he would continue to live his life. In September 2008, a year after starting a program of intensive physical training which included swimming long distances in a local indoor pool and peddling many miles on a hand-cycle, Daniel competed in the Westchester Triathlon. Over the next six years, he was to compete in 16 more triathlons, three full and two half marathons, and one half- ironman event. Daniel explained to me how these events, which are open to the general public, are able to include “challenged athletes.” While the rules in general are the same for all participants, he explained, “challenged athletes” compete in their own separate divisions. In addition, he noted, “transition zones” are provided to help them transfer in and out of wheelchairs and into hand cycle or racing chairs. “The people who run these competitions,” Daniel stated, “strive to be both inclusive to all, and, at the same time, aware and sensitive to the challenges faced by people with special needs, which makes these events wonderful and uplifting.’’

In September 2009, Daniel assumed a new endeavor that tested his mind no less than competing in marathons tested his body: He was elected president of the New York City Chapter of the of the United Spinal Association (WWW.NYCSPINALCORD.ORG), an organization for which he had served as an active member for several years prior. His local New York chapter of the national association, Daniel, still its current president,explained performs the same three fundamental jobs for people with severe spinal injuries as do its counterparts in dozens of cities across America. Those jobs, he told me,involve writing grants to obtain funds to purchase specialized equipment,running support groups, and sponsoring social and educational events for members and the and the family of members.“I feel’’,he stated, “a deep sense of accomplishment by being able to help through our organization people with severe spinal injuries to adapt socially, emotionally and physically to their challenges.”

Daniel was to achieve another great accomplishment. This one personal, rather than professional in nature. In late November, 2014, he met and soon fell in love with Anna Raykhtsaum. The couple, who married on October 9th, 2016, is now planning to start a family. About Anna, who is completely able-bodied, and about their plans to start a family, Daniel stated, “She is the most wonderful person I ever met. She is loving, kind and supportive. She never stops believing in me, and always encourages me with her belief that because of my spirit, drive and love for people, I will be able to fulfill my desire to be able help others live happier and fuller lives… Without going into specific medical details, I can tell you our dream of starting a family has a good chance of coming true.” 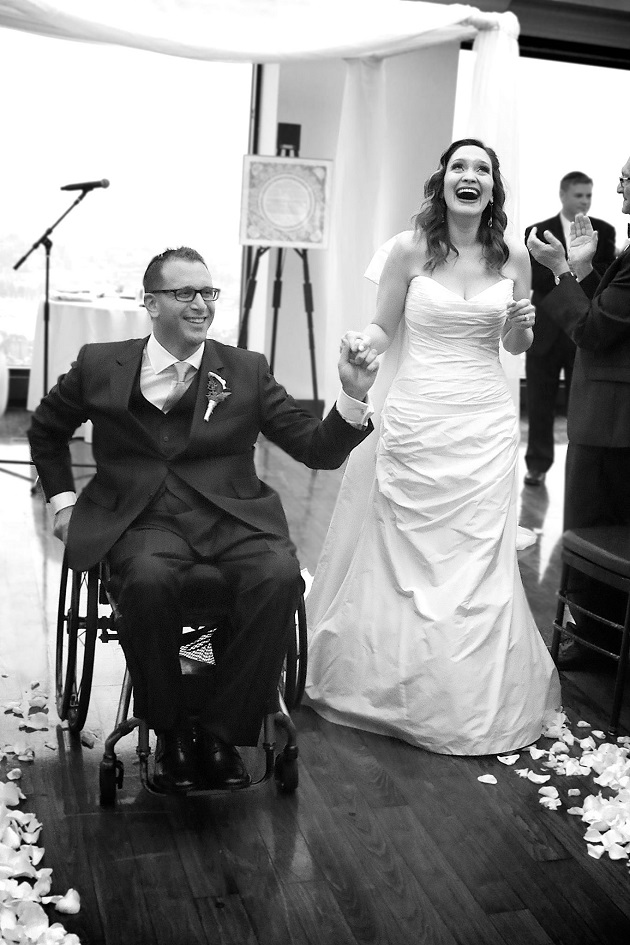 Dan and Anna at Their Wedding.

It would seem that Daniel has accomplished enough in his life to be fully satisfied. However, he still has at least one goal remaining: He wants to become a secondary school assistant principal (AP) of special or general education. Having just completed a two-year graduate program in supervision and administration and also passing a series of New York State licensing exams, Daniel has just begun to apply for AP positions in districts throughout the city.

For Daniel, whom I met for the first time this past winter while I was conducting a graduate college writing seminar for prospective school leaders, becoming an AP would be a natural next step in his life.

“As a teacher I was able to play a major positive role in the lives of my students,” said Daniel. “The job of assistant principal will allow me to do the same for both students and teachers. As someone who has been helped to overcome so much by so many, I can’t wait for a new opportunity to serve others.”

Photo Credit: Daniel Tratt
Robert Golomb is a nationally and internationally published columnist.
E-mail him at MrBob347@aol.com and follow him on Twitter@RobertGolomb 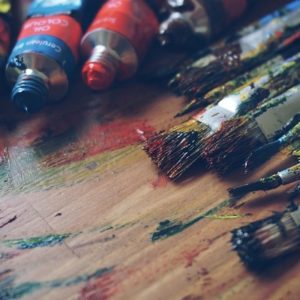