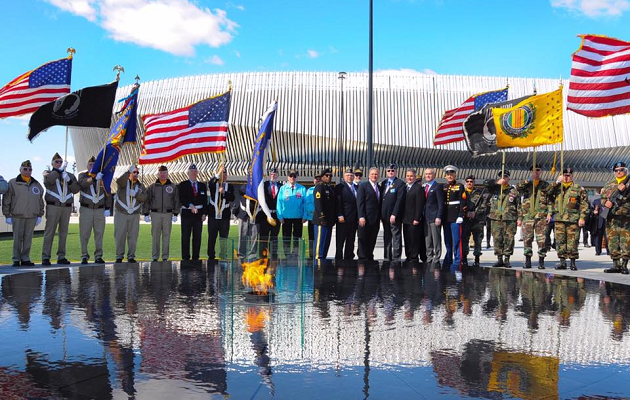 NEW YORK – Nassau County Executive Edward P. Mangano, along with veterans and officials from NYCB LIVE’s Nassau Veterans Memorial Coliseum, unveiled and dedicated a new veterans monument at the transformed and newly reopened sports and entertainment venue on Saturday, April 8th. An eternal flame was lit, courtesy of National Grid, which represents our eternal gratefulness to the commitment and dedication of our nation’s veterans.

“My administration made certain that the name – Nassau Veterans Memorial Coliseum – would forever remain at the arena and renewed our commitment to our nation’s hometown heroes by constructing a respectful Monument on the plaza,” said Nassau County Executive Edward P. Mangano. “This Monument, and its eternal flame, represent our country’s eternal gratefulness to our veterans for their service and dedication to our nation. Together with the Chairs of Honor within the Veterans Memorial Coliseum, this venue truly pays tribute to our veterans.”

The memorial, designed by Fluidity and BLD Architecture, is positioned in a highly visible and prominent location by the venue’s front entrance and features a graceful sculpture honoring Long Island’s and all United States veterans. The focal point is a dark granite oval, 19-and-a-half feet by 16-and-a-half feet in diameter. A constant source of water flows from the stone’s center and spreads over its surface to create an ’infinity edge.’ In the center of the oval, National Grid honors veterans with an eternal flame.
Originally opened in 1972, the Coliseum underwent a $165 million renovation and reopened on Wednesday, April 5 with a sold out show from legendary Long Islander Billy Joel, marking the first public performance in the reimagined Coliseum.

In addition, eight seats in the renovated Coliseum will remain vacant for all events in silent tribute to American Prisoners of War (POWs) and those Missing in Action (MIAs), the five branches of the U.S. military (Army, Navy, Marine Corps, Air Force and Coast Guard), first responders, including firefighters, law enforcement and emergency medical service members, and those who lost their lives on September 11, 2011, including more than 500 Long Islanders.

“We are proud to share this moment and monument with the veterans of Long Island,” said Bruce Ratner, Executive Chairman of Forest City Ratner Companies. “We built this memorial to demonstrate our thanks for what our veterans have so selflessly given to protect this nation and our freedoms. Our commitment to our troops and our thanks are eternal.”

“We are proud to unveil the Veterans Memorial which pays tribute to those who have served in our nation’s armed forces,” said Brett Yormark, CEO of Brooklyn Sports & Entertainment. “In the Coliseum’s redevelopment, we made it a priority to honor its storied history, which first and foremost includes the brave men and women for whom the venue is named for. To all veterans, we thank you for your service.”

“We are honored to light the Veteran’s Memorial Eternal flame in honor of all our veterans,” said Ken Daly, President of National Grid New York. “The memorial will serve as a reminder of our unending support to veterans and their contributions to our country. Our support of the flame, and the natural gas lamps that surround it, reflects the esteem with which we hold our veterans who work here at National Grid and in the Long Island communities that we proudly serve.” 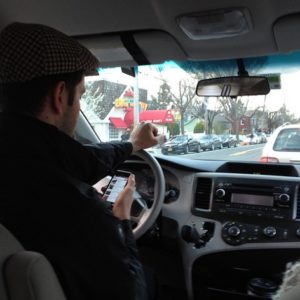