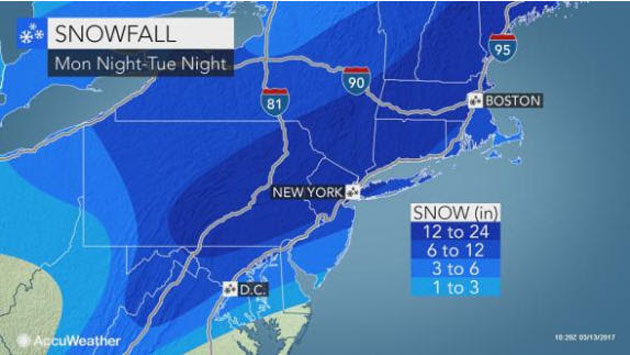 NEW YORK, NY –  According to AccuWeather.com, reports a major nor’easter threatens to shut down travel due to heavy snow and strong winds from Washington, D.C., to New York City and Boston early this week. Blizzard conditions will develop in part of the northeastern United States.

A storm will first continue to bring snow and travel problems in the Midwest through Monday.

A new storm will rapidly strengthen and hug the east coast of the U.S. early this week. 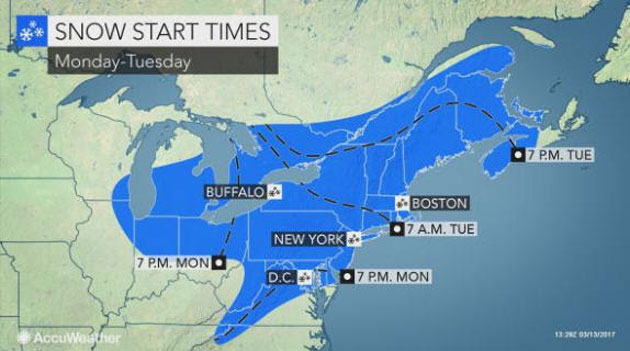 For many areas in the Northeast, this will likely be the biggest and most impactful storm of the winter.

Heavy snow over such a broad, heavily populated area could bring travel to a standstill. Snow and snow drifts will clogs streets and highways. Heavy snow and wind trigger will airline delays and flight cancellations. Some flights have already been canceled in advance of the storm. 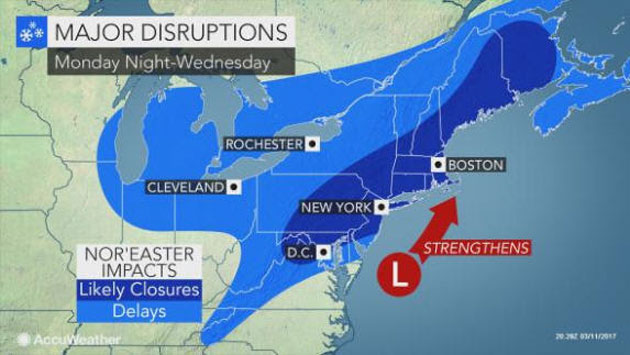 For thousands of miles of roads in the region, this will be an unusually cold storm for the middle of March. Much of the snow that falls will rapidly accumulate on the roads across the interior of the mid-Atlantic and New England. Some people could become stranded on area highways.

“Residents should prepare for school closures and potential cancellations of sporting events due to hazardous travel for players and fans,” according to AccuWeather Senior Meteorologist Kristina Pydynowski.

In some areas where a mixture of rain and snow or a change to rain do not occur, blizzard conditions will develop. This is most likely in New England to near New York City. However, extensive blowing and drifting snow will also occur as far west as western Maryland and eastern West Virginia. 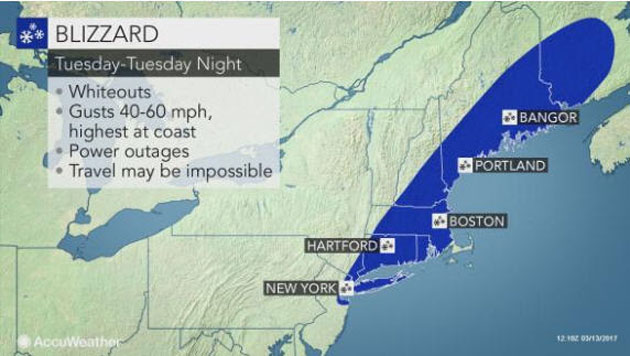 At this time, it appears that areas from eastern West Virginia and northern Virginia to northern Maryland, central and eastern Pennsylvania, northern New Jersey, central and southeastern New York state and a large part of New England will be shoveling out of 6 inches or more of snow from the storm.

Snowfall could rival that of March 1993 blizzard

The heaviest snow is likely to fall near the I-81 corridor of Pennsylvania and along part of the New York Thruway in the Hudson Valley of New York, I-91 in northern Connecticut and Massachusetts and I-93 in New Hampshire. In this zone, from 1 to 2 feet of snow can pile up with locally higher amounts possible. Drifts up to several feet are likely.

“In some locations in Pennsylvania, New York state and New England, snowfall from this storm could be the biggest March snowstorm since that of the 1993 March blizzard,” according to AccuWeather Chief Meteorologist Elliot Abrams.

Thunder and lightning can accompany the snow in some locations.

A widespread zone of around a foot or more of snow is expected from the northern and western suburbs of Philadelphia to New York City, Boston and Portland, Maine.

“New York City’s Central Park has not recorded more than 10 inches of snow from one storm in March since the 1993 Storm of the Century,” Pydynowski said. 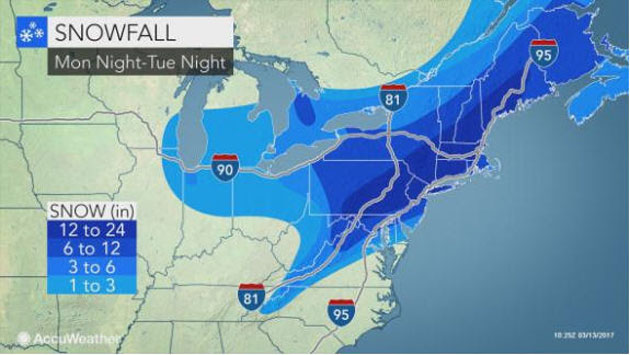 Exactly where the storm tracks will determine the western extent of the heaviest snow zone, as well as where rain will fall along the coast and cut down on snowfall accumulation.

All rain or a mixture of rain and snow is likely to fall on southeastern Virginia, southeastern Maryland, southern Delaware, southern New Jersey and Cape Cod, Massachusetts. An anticipated change to rain in these areas will greatly limit snowfall and confine that snowfall to the first part of the storm. Should the storm track farther to the east by 50 to 100 miles, then heavy snow could fall in these areas for the duration of the storm.

Rain and sleet are likely to mix in at the height of the storm in Washington, D.C., Baltimore and Philadelphia. This mixing could also reach New York City and Boston for a time. The mixing would cap the snowfall, ending the threat of blowing and drifting snow, and could cut total snowfall accumulation.

The worst conditions in terms of wind, snow and coastal flooding are likely to be from the upper part of the mid-Atlantic through northern New England and part of Atlantic Canada.

Increasing wind to cause coastal flooding, power outages and intensify the cold

As the storm intensifies, winds will ramp up along the coast and expand inland.

Wind gusts can frequently top 40 mph at the height of the storm, which cannot only create blizzard conditions, but may break tree limbs and threaten sporadic power outages. 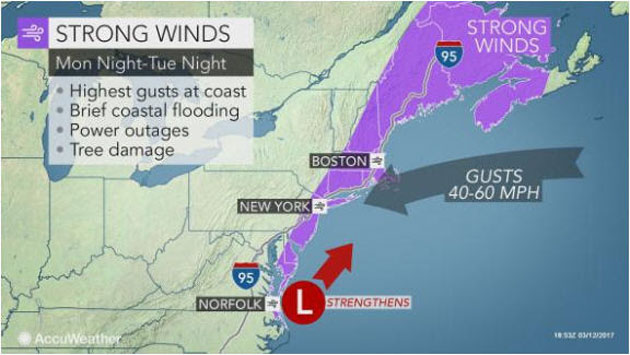 During much of the storm, northeasterly winds will pull ocean water toward the coast and create rough surf from Virginia to Maine.

This effect will cause tides to run 1-2 feet above normal and can result in coastal flooding at times of high tide. Beach erosion will occur as well.

Since the storm is likely to maintain its forward speed, the period of coastal flooding and beach erosion will be relatively brief.

For those that lose power, cold air with wind more typical of the middle of January will settle in behind the storm. 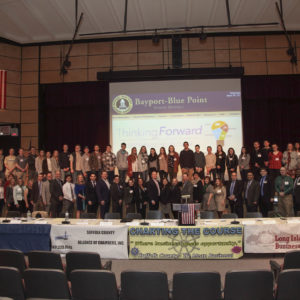 NEW YORK - Suffolk County Legislator Bill Lindsay teamed up with his colleagues at the State, Town and County government...