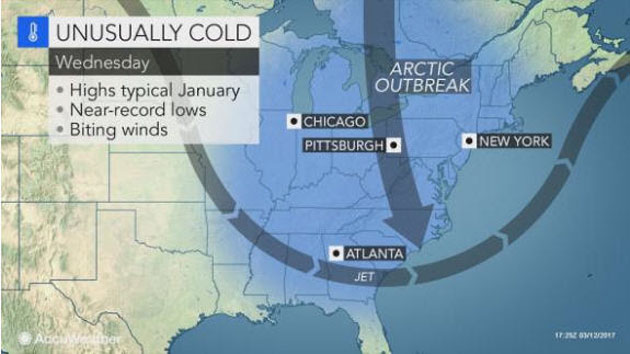 NEW YORK, NY – According to AccuWeather.com, winter’s revenge shows no signs of releasing its grip on the eastern United States as widespread, bitter cold will follow the early week major nor’easter.

“Winter will hold a tight grip on the Northeast in wake of the significant snowstorm early this week,” AccuWeather Meteorologist Max Vido said.

A fresh blast of arctic air will plunge southward in the wake of the nor’easter, encompassing nearly the entire eastern half of the nation by midweek.

Highs at midweek will be held below freezing throughout the Great Lakes and Northeast. Temperatures will not rise out of the lower and middle 20s F in the Appalachians, including in Binghamton, New York, and Burlington, Vermont. 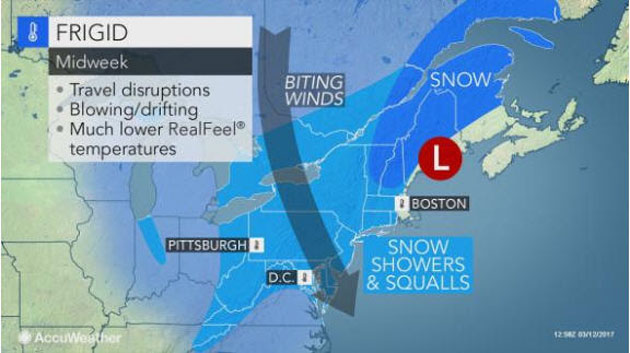 “Factoring in the wind, cloud cover and other variables, AccuWeather RealFeel® Temperatures will be 10 to 20 degrees lower than the actual temperature,” AccuWeather Meteorologist Renee Duff said.

Winds will gust between 35 and 45 mph in the Northeast and mid-Atlantic. In addition to forcing residents to dress for harsh mid-winter conditions, the winds will blow and drift snow left by the nor’easter.

Blowing snow will create headaches for crews by covering roads already cleared. Motorists may also face reduced visibility. The winds may lead to minor flight delays, further complicating airlines’ efforts to get back on schedule.

As the cold winds blow, lingering snow over the Appalachians will be enhanced downwind of the eastern Great Lakes with the potential for significant additional accumulations, squalls and more travel hazards.

Snow showers and flurries may also occasionally streak east of the mountains. There could be enough snow showers to once again coat roads and create slippery spots on untreated surfaces around the Washington, D.C., area, especially on Tuesday night into Wednesday.

The cold will not be confined to the Northeast. Temperatures will be held 10 to 20 degrees F below normal southward to Tampa and Orlando, Florida.

Wednesday could be the coolest day for Jacksonville, Florida, since late January.

At night, subfreezing temperatures will encompass the South, southward to the I-10 corridor and even to Ocala. Where fruit tree blossoming has begun, significant damage to the crops can occur.

Pipes that are above ground could freeze and burst. Leaving the water drip might be enough to prevent costly damage and repairs.

Midweek will feel more like the dead of winter with Nashville; Raleigh and Charlotte, North Carolina; Augusta, Georgia; Birmingham, Alabama; and Jacksonville, Florida, among the many communities that will challenge record lows.

However, freezing temperatures are not expected to dip to the citrus regions.

“The freeze will stay in the northern part of Florida, where there is not commercial citrus growers,” AccuWeather Senior Meteorologist Dale Mohler said.

While the harsh cold will slightly ease by the weekend, the stage could still be set for snow to return to a part of the Northeast. Another shot of cold may then plunge into the Northeast next Tuesday and Wednesday. 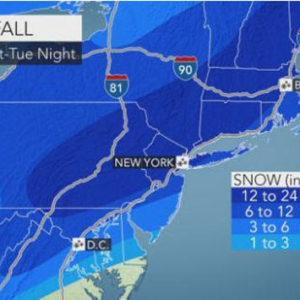 NEW YORK, NY -  According to AccuWeather.com, reports a major nor'easter threatens to shut down travel due to heavy snow...