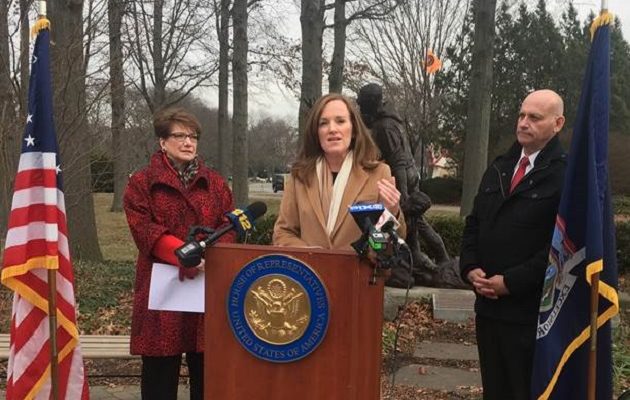 NEW YORK – As we approach the holiday season, one of the most dangerous periods of the year for drunk driving, U.S. Representative Kathleen Rice today unveiled major new legislation that will set national standards for criminal penalties against individuals who drive while intoxicated or impaired with a child passenger in the vehicle. Joined by Mothers Against Drunk Driving (MADD) National President Colleen Sheehey-Church and MADD New York Executive Director Richard Mallow at the Garden of Hope memorial for drunk driving victims in Eisenhower Park, Rice explained that her bill will compel every state in the country to adopt laws similar to New York State’s Leandra’s Law, which made it a felony offense for an individual to drive drunk or impaired with a child passenger in the vehicle. Rice’s legislation requires states to enact and enforce strict laws related to an individual who drives while intoxicated or impaired with a child passenger in the vehicle – including that an individual arrested for such an offense can be charged with a felony; that the individual’s driver’s license will be suspended during the course of the prosecution; that the individual must install an ignition interlock device for at least six months if convicted; and that authorities must file a report with the appropriate state register of child abuse if the individual is the parent, guardian or custodian of the child passenger. Beginning in Fiscal Year 2019, the U.S. Secretary of Transportation would withhold federal funding from each state that fails to comply. Any funds withheld from a state will remain available for three years, and will be awarded to the state if it meets the law’s requirements within that time.

“Driving drunk with a child in the car is child abuse, plain and simple,” said Representative Kathleen Rice. “While most states have taken some action to crack down on those who commit this crime, Leandra’s Law in New York is the toughest and most comprehensive child endangerment law in the country, and this bill will make it the national standard. This is common-sense, non-partisan legislation that both MADD and members of the alcohol industry support. It will be the first bill I introduce when Congress reconvenes next month, and we’re going to work hard to build support on both sides of the aisle and get it passed.”

“Child endangerment is not only unconscionable, it’s a crime and a form of child abuse. Children don’t have a voice or a choice when riding with an adult, and they should never be in danger from drunk driving, especially by those entrusted to keep them safe,” said MADD National President Colleen Sheehey-Church. “MADD is proud to work with Congresswoman Rice. As District Attorney, Congresswoman Rice made it clear that drunk driving would not be tolerated. Her leadership and dedication to stopping the 100 percent preventable violent crime of impaired driving was noticed throughout Nassau County, Long Island, the state and the entire country.”

“Anyone who is driving drunk or while impaired by drugs and simultaneously transporting a child is clearly in need of a strong intervention,” said Ralph S. Blackman, President and CEO of the Foundation for Advancing Alcohol Responsibility (Responsibility.org). “Many DUI offenders have undiagnosed and untreated mental health disorders that go hand in hand with their substance abuse. This legislation will protect children and the general public by preventing drunk driving while helping identify and treat offenders to ultimately change behavior and save lives.”

The Prevent Impaired Driving Child Endangerment Act requires states to enact and enforce the following laws with regard to an individual who drives while intoxicated or impaired by alcohol or drugs with a child passenger in the vehicle:

The full text of the bill is available here. 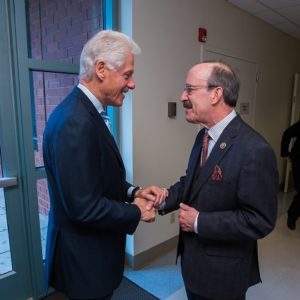