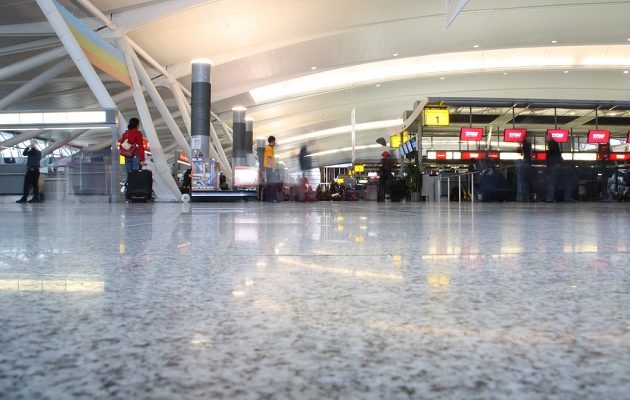 NEW YORK – U.S. Senator Charles E. Schumer called on the U.S. Department of Homeland Security (DHS) to open a formal investigation into the recent “shots fired” scare that occurred this past Sunday at New York City’s JFK Airport. Schumer cited a patchwork of federal, state, local law enforcement and private entities —like airlines and contractors hired by airlines—that oversee security at the airport as he made the case for a DHS investigation.

“In the age of ISIS-inspired-and-directed terror attacks it is a national priority to make sure targets, like our airports, are best prepared to recognize, diffuse and professionally handle the very real threats that confront us. And the panic and chaos that ensued from the ‘shots fired’ scare at JFK last week raises very disturbing questions about the state of preparedness and coordination of response if – heaven forbid – a real attack were to occur,” said U.S. Senator Charles Schumer. “That’s why I am asking DHS to open a formal investigation in the ‘shots fired’ scare at JFK and to audit security procedures to determine if the airport is ailing from terminal security flaws and to make recommendations for how to best improve this situation. Keeping our citizens safe is job #1, and the feds, ?which are involved in airport security all across the nation, have the ability to sift through the agency medley like the one JFK’s security involves; we must use them to get to the bottom of how and why this chaos unfolded and ensure it’s fixed.”

Schumer said federal agencies like the Transportation Security Administration (TSA), Customs and Border Patrol (CBP) assist and oversee JFK security. Schumer said that the Department of Homeland Security (DHS) also recommends security measures at airports, which is why their involvement here is warranted.

As part of a formal DHS review, Schumer seeks the answers to ten specific questions as part of any investigation:

1) When was the last time a DHS safety audit was conducted at JFK and how many of the recommendations from that review have been implemented? ?

2) What, if anything, does camera footage of the event show? Would additional cameras or better camera placement have helped show more information?

3) What does TSA staff training say about the potential for incidents like this? How can that training be improved?

4) Do TSA and other security agencies involved drill for situations like this? If so, when was the last time such a drill was conducted at JFK?

5) What additional resources, personnel, or technologies could have helped improve response in this situation?

6) How does interagency communication work between airport employees, airline employees, and DHS personnel? Are those systems effective? Do they work well? How could they be improved?

7) ?In the event of both fake and real active shooter situations, what systems are in place to communicate with airline customers? How could those communication systems be improved?

8) During active shooter situations, how does coordination with local law enforcement like NYPD work? How could it be improved?

9) What impact does employee retention and recruitment have on the ability for TSA and airlines to have experienced employees who can properly respond in situations like this on the job?

10) ?What, if any lessons learned from this situation at JFK can be used to improve security and response protocols at other airports?

Schumer added that the common goal of terrorism response and prevention demands the DHS work with the Port Authority and lead an investigation that combs through the medley of agencies accountable for what went right and what went wrong during the scare – and to make recommendations for improving protocols and information sharing and more.

In making his push, Schumer cited alleged reports that TSA agents abandoned posts, yelled misinformation, and possibly added to the chaos during the JFK ‘shots fired’ panic. Schumer also noted that there were long periods of time during the scare when no agency provided useful information to passengers, crew and other personnel present at the airport. Schumer said these accounts represent potential flaws that DHS has the resources to diagnose and address through retraining mandates or policy changes. Schumer added that should an investigation identify major security flaws, he would ?lead an effort to fix them fast.

Because reports from the “shots fired” scare also cited issues with airport security cameras, Schumer reiterated concerns he voiced earlier this month that highlighted the lack of a unified security camera system at New York area airports. These concerns included reports that the Port Authority police are unable to access all of the security cameras at once and in real-time. Schumer is urging DHS to work hand-in-glove with the Port Authority, the Transportation Security Administration (TSA), and other relevant stakeholders to ensure that any concerns are identified and fixed, as part of his investigative push.

Schumer explained that, while DHS recommends security measures for each airport, these recommendations do not need to be followed. Each airport has a unique Airport Security Plan (ASP), which is developed in conjunction with the TSA to fit that specific facility’s layout, size, number of entrances, number of employees and other unique factors.

According to the Port Authority Police Benevolent Association, there are also no cameras in the front roadways of airports or in the common areas such as, the food courts, which may have contributed to additional chaos during the JFK scare.

Last Sunday’s scare saw over 200 officers respond, the evacuation of passengers from the airport and also grounded flights for hours. The spread of misinformation related to the scare caused mass confusion that demands a thorough federal investigation, Schumer said.

by Michael Adams Gawker Media is no more. The web-based media conglomerate was acquired by Univision at an auction on August...