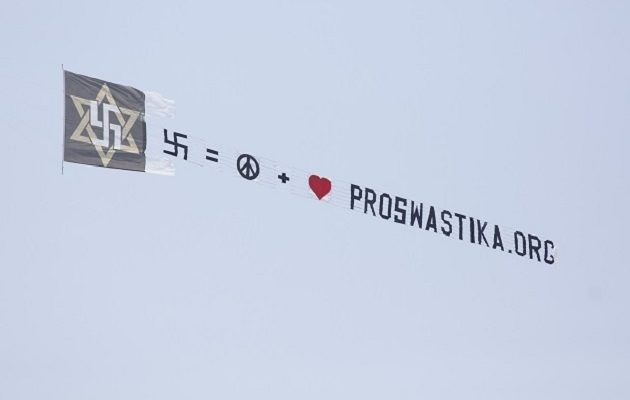 LONG BEACH, NY- This one is a bit of a doozy. Last Saturday, on Shabbat—the Jewish Sabbath—residents in Queens and Nassau County may have noticed some unusual symbols flying overhead, on banners dragged by airplanes. There were peace symbols, there were also hearts, but the thing that really caught people’s attention were the swastikas.

Apparently, June 25th is Swastika Rehabilitation Day. The event, which sees demonstrations around the world, was started by the Raelian Movement with the goal of disassociating the ancient religious symbol from its context as an icon of the Nazis. “The swastika is found in cultures around the world from the very earliest times,” said Thomas Kaezing, President of the ProSwastika Alliance, “the swastika had nothing to do with Hitler, who used it for evil purposes.”

Unfortunately for the movement, that context is just about the only context in which the Swastika is remembered. The aerial display of the Swastika was met with universal disapproval by the residents and politicians of Long Island, and seen as profoundly disturbing to the area’s Jewish population. Senator Todd Kaminsky and Legislator Denise Ford, leading a bipartisan group of local politicians, decried the display in a press release. “Bigotry and hatred have no place in our diverse community,” said Kaminsky, “swastikas are symbols of intolerance and have no place in our society, and it’s unconscionable that anyone who is enjoying a beautiful day on the beach should be subjected to this deplorable symbol.”

Legislator Ford echoed a similar view, shared by many of her coworkers in the government. “This is a despicable act,” she said, “no matter how much you try to change its meaning this symbol will always remain one of the most vile of images in history.” Kaminsky introduced a bill that would ban the public display of swastikas. The Raelians have opposed the bill on the grounds that it interferes with Constitutional rights to both freedom of speech and freedom of religion. The Raelian Movement believes that life on Earth was originally seeded by extraterrestrial beings, who were mistaken as angels when they appeared throughout time to impart wisdom, most recently to their founder Rael—a former automotive journalist—in 1973.

The use of the swastika Predates written history. Its appearance has been documented in societies going as far back as the Neolithic Era, where its purpose seems to have originally been decorative. For thousands of years, it has been a prominent religious symbol, used in Hinduism, Buddhism, and Jainism, where it is used both as a good luck charm and a representation of God and eternity. The Raelians themselves employ the swastika in a similar manner, embedded in the Star of David as a representation of infinity in space and time. The word swastika comes from Sanskrit, and translates to mean a symbol of good luck. 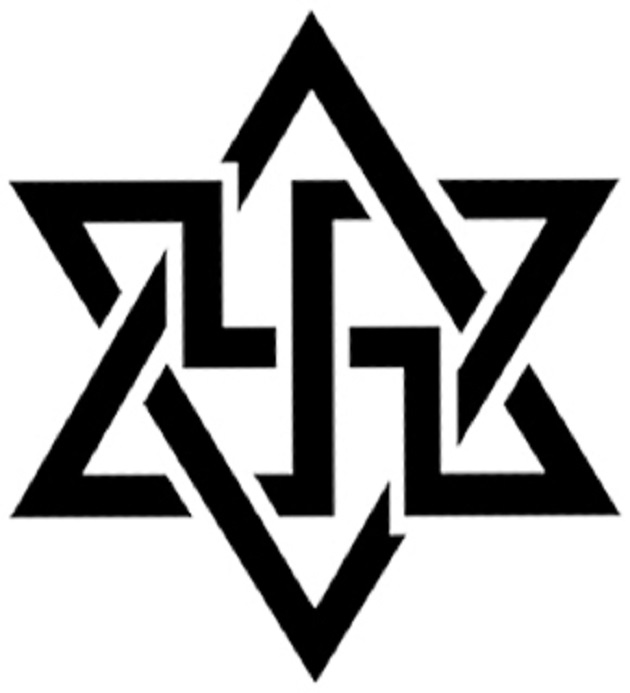 Swastika Embedded in The Star Of David, a Raelian Symbol, Source: Proswastika.org

In the early 20th century, the swastika saw widespread use in Western cultures and the US, in both its left-facing form and more infamous right-facing form. The Navajo Tribe in Arizona used it so much, the state government decided to adorn its highway markers with the broken cross. American soldiers even wore swastika patches on their arms during World War I for good luck. It is out of this prominence that the symbol came to be used by the Nazis. Hitler himself was responsible for its adoption. He was inspired by its use in the Pre-Fascist Thule Society in Germany, and based its usage on a deep understanding of the symbolism and history behind his choice.

A key tenant of the Nazi mythos is the superiority of the Aryan race. Nazis believed the Aryans to be white, blonde-haired and blue-eyed. Historically, the Aryans were a group of people believed to have made their original home somewhere in Central Asia. Analysis of the massive Indo-European family of languages points to evidence that the Aryan peoples migrated outward, reaching all the way from Europe to India, where their appearance coincides with the decline of the ancient Indus River Valley civilization. The origins of Hinduism are shrouded in mystery, but the fact that this period of Indian history is when the sacred Vedas were composed has led many to associate the Aryans with Hinduism. Modern scholars reject the concept of the “Aryan Invasion” as a colonialist construct, but Hitler was one of the people enamored with this supposed connection to the Aryans, who around the time were theorized to be a distinct subdivision of the Caucasian race. Adopting the ancient Hindu symbol was just one of a series of attempts to legitimize Nazism and connect its ideology with belief systems that had endured for millennia. 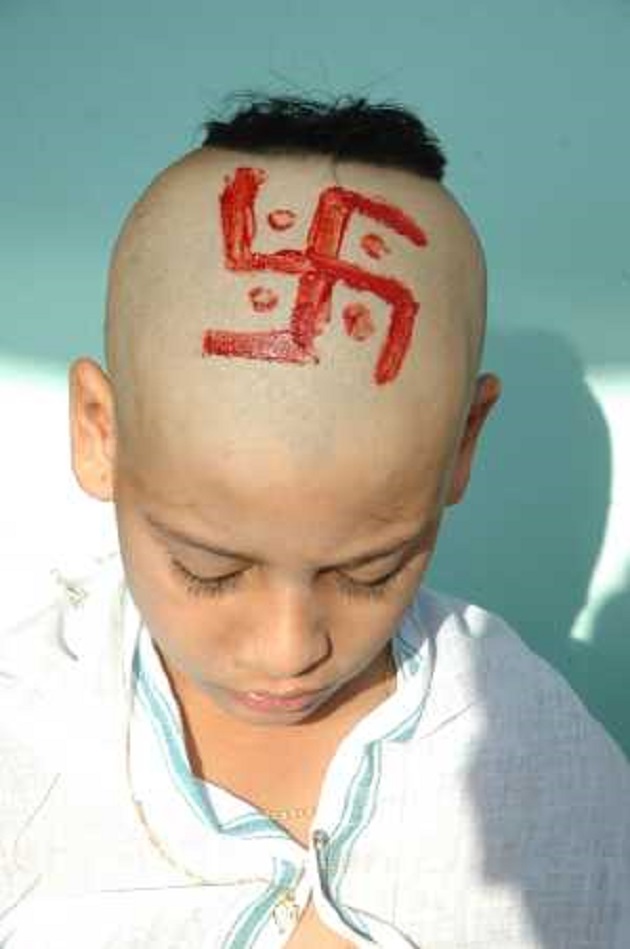 Hindu Child With a Swastika Painted on His Head, Source: Wikipedia, Vivek Joshi

Despite its connection to a movement responsible for the deaths of millions of people, it seems the Raelians will not rest until their right to display swastikas in public is safe and secure. Kaenzig finds this animosity towards the swastika hypocritical, as the Christian cross has also been associated with violence. “Previously, the swastika had only positive connotations of good luck and well-being,” Kaenzig said. “Continuing to associate it with Nazis gives them credit for it, probably the last thing their victims would have wanted. Would Senator Kaminsky also ban the Christian cross? Remember, tens of millions were murdered under that symbol in the Americas, Africa and Europe, and the Klu Klux Klan also used it.”

Kaenzig also argues the response is hypocritical because the swastika has seen use in Judaism as well, where it is present in the artwork of some old synagogues. “It’s on old synagogues, like that in Verona, Italy, and in many Israeli sites, including the Second Temple, one of the holiest places for Jews,” he pointed out. “Nobody has asked that those symbols be removed, so why is displaying swastikas more of an issue in New York? Education is the solution, not banning. That’s what Swastika Rehabilitation Day is all about.”

Jewishpress.com counters Kaenzig’s point, saying “there are many more swastikas spray-painted on Synagogues by anti-Semites than inside synagogues as decoration.” As for the argument of the cross, it is again necessary to remember context in this situation. Spray-painting a cross on a wall in Long Beach doesn’t make people fear for their lives. The Raelian argument holds water, but neglects to properly factor in the trauma associated with the swastika, portraying the issue as merely an issue of poor education. No amount of learning will remove the swastika from its status as a symbol of hate. No book or speech or impassioned argument will change the fact that the symbol the Raelians are trying to “rehabilitate” adorned the death camps that took the lives of people whose children and grandchildren now live on Long Island. When people see a swastika on a banner, they do not see a misappropriated symbol that needs to be redeemed in the eyes of the public. In fact, many people do not see much of anything at all. It isn’t easy to see through tears. 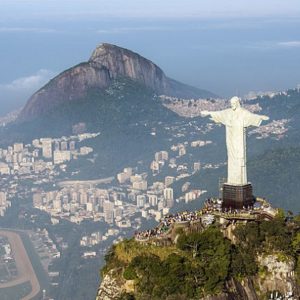 by Michael Adams RIO DE JANEIRO, BRAZIL- There’s not a lot to be said about the sordid state of Rio de Janeiro, the city...