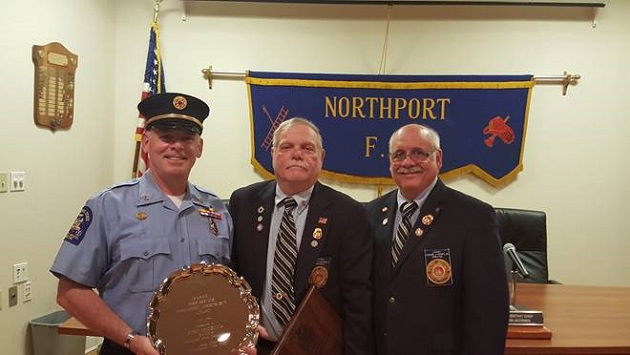 NEW YORK – The Firemen’s Association of the State of New York (FASNY) has named John McKenna, a 30-year member of the Northport Fire Department, as the 2016 recipient of the Fire Service Community Achievement Award. This statewide honor is awarded annually to a single individual in recognition of his or her activities in community service organizations outside their membership in the fire service. John was honored at a ceremony on June 20 at the Northport Fire Department. Those present at the ceremony included FASNY President Robert McConville, FASNY Director Eugene Perry, and members of the Northport Board of Fire Commissioners.

A graduate of SUNY Farmingdale and Stony Brook Universities, John served for over 20 years as the Northport Fire Marshal in addition to his duties as a volunteer firefighter, and now works as a dispatcher in Northport. Since 2002, he has been involved with the St. Baldrick’s Foundation, a nationally recognized organization dedicated to beating childhood cancer. Since then, John has assisted in raising over $5.1 million in Northport alone, and served on the St. Baldrick’s Board of Directors from 2003 to 2011 (he is now a Board Member Emeritus).

McKenna’s list of past honors is extensive. He joined the Northport Fire Department in 1986, and has since held nearly every position in the organization, including a term Chief of the Department. He has been recognized by his peers numerous times, being honored as the Northport Firefighter of the Year in 1995, and received the Captain James Mahoney Award in 2014 from the Northport Board of Fire Commissioners. John received the EMS Excellence Award every year from 1988 to 2004, the Chiefs’ Award from 2006 to 2012, and was awarded the Department Life Saving Medal in 1996, 2001, and 2007. He has been heavily involved in the Huntington Town Chiefs for the past 10 years, serving as Secretary, First and Second Vice President, and most recently as President (his term as President ended in May of 2016).

John’s service also extends into the classroom. As a member of the Northport Fire Prevention Committee since 1987, he has taken part in fire safety classes and outreach at group homes in the Northport Area, and regularly visits third grade classrooms. During these visits, John and his colleagues instruct the youth in fire safety and accident prevention.

“Simply put, John McKenna is a role model for all of us in the volunteer fire service,” said FASNY President Robert McConville. “His service and dedication to his community is remarkable. There can be no question that his work has made Northport, Huntington, and Long Island a better place for all. I can think of no better recipient for this year’s Fire Service Community Achievement Award.”

“For over 30 years, John has served Northport with honor and distinction,” said Northport Fire Chief Brad Wine. “His list of honors and accomplishments is nearly too long to list. His dedication and service has been inspirational to all of us in Northport, and we are so proud that he is being recognized by FASNY for his tireless, invaluable service.” 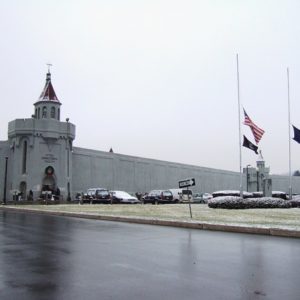 NEW YORK - States that reduce their prison populations are seeing their crime rates go down too, according to the the Brennan...