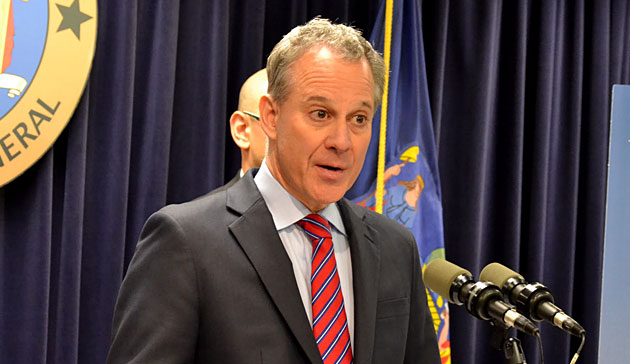 LONG ISLAND, NY – Attorney General Eric T. Schneiderman today announced that his office has discovered high lead levels in parts of several children’s jewelry-making kits supplied by LaRose Industries and sold in K-Mart, Target, and Toys-R-Us stores in Long Island, New York City, and the Syracuse and Buffalo areas. In some instances, the toys contained lead up to ten-times greater than federal child safety limits. The same kits were also offered for sale in Rochester and by other retailers in New York.

Based on these findings, Attorney General Schneiderman is calling on LaRose, K-Mart, Target, Toys-R-Us, and other retailers of Cra-Z-Art products in New York – including Amazon and Walmart – to immediately remove from sale and recall the products found  to contain high lead levels, as well as any similar Cra-Z-Art products. He is also calling on the federal Consumer Product Safety Commission (CPSC) to require a national recall of these products.

Attorney General Schneiderman has also launched an investigation to determine how these children’s products containing high lead levels reached store shelves in New York.  The Attorney General is seeking information on companies’ internal procedures and practices for interdicting products containing toxic chemicals before they reach the market, as well as their adherence to state and federal laws governing the safety of children’s products.

“Manufacturers, importers, distributors, and retailers all have a responsibility to ensure that products intended for use by children are safe,” said Attorney General Schneiderman. “My office’s discovery of children’s products containing high-levels of lead for sale on store shelves in New York points to an alarming breach in the safety net that is supposed to protect our kids from dangerous chemicals. In addition to calling for immediate action to remove these products from store shelves, my office will investigate – and hold accountable – those responsible for allowing toxic products to reach our children. No parents should have to worry that a toy they buy may poison their child.”

As a follow-up action, in October and November 2015, and February 2016, the Attorney General’s office purchased a number of products intended for use by children at stores in Long Island, New York City, and the Syracuse and Buffalo areas. A CPSC-accepted laboratory tested products for levels of lead and other toxic metals. Tests revealed that the wristbands associated with several Cra-Z-Art children’s jewelry-making kits sold in Target, K-Mart, and Toys R Us stores, and supplied by LaRose Industries, contained lead at levels of 120 to 980 parts per million (ppm) – levels that exceed the 100 ppm limit established under the federal Consumer Product Safety Act (CPSA) for children’s products.  The Attorney General’s office also determined that the same kits were offered for sale at stores in Rochester and by other retailers in New York.

The lead levels measured in the wristbands of these products, and the stores and locations from which they were purchased, can be found below. 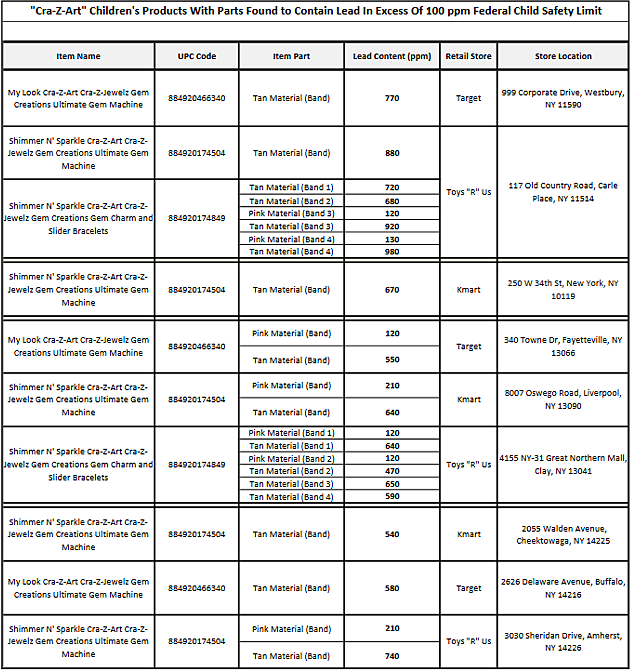 Photographs of the products can be found below.

The Attorney General’s letter calling for an immediate end of sales and a recall of the high-lead Cra-Z-Art products – as well as similar Cra-Z-Art products – was sent to retailers known to sell these products in New York: Amazon, Fishpond.com, Jet.com, K-Mart, Sears, Target, Toys-R-Us, Walmart, and Yoyo.com, as well as known suppliers of the products: LaRose Industries and Shepher Distribution and Sales.

“Play should be a safe and fun experience for children that never puts them at risk,” said Rochester Mayor Lovely A. Warren. “Children who grow up in safe environments are more likely to have better educational outcomes and access to good jobs later in life. By keeping toxic toys off the shelves, Attorney General Eric Schneiderman is protecting our consumers, both in Rochester and across New York State.”

“Children and families throughout our state are unknowingly exposed to harmful chemicals, including lead-based products, on a daily basis,” said Senator Joe Robach, 56th District. “I am pleased to see that the Attorney General is taking this issue seriously by cracking down on the sale of these harmful products in stores throughout New York.”

“In the Assembly, my colleagues and I have maintained a long-standing and unwavering commitment to advancing measures that prevent lead-contaminated toys from finding their way to store shelves,” said Assembly Majority Leader Joseph D. Morelle. “As a father of 3 and grandfather of 2, I believe we must take every step necessary to protect children from exposure to dangerous toy products containing neurotoxins, and hold those who put them in harm’s way accountable. I applaud Attorney General Schneiderman for his leadership and commitment to addressing this very serious issue, and I look forward to working together as we seek to raise further awareness amongst consumers.”

“I am pleased to join Attorney General Schneiderman on Earth Day for this important announcement,” said Assemblymember Harry Bronson. “Earth Day was started so that we would educate each other regarding how we need to take care of our planet so it will take care of us, this includes our next generation.  Taking care of our planet so it takes care of us includes identifying and ending our children’s exposure to toxins found in their toys.  Something that is marketed as fun should not be harmful.  I applaud AG Schneiderman for taking this action to protect our children, their future and our earth.”

“Empire State Consumer Project has been testing consumer products for over 40 years and is still finding lead in children’s products,” said Carol Chittenden, Director, Empire State Consumer Project. “Lead is especially dangerous to children because their brains and nervous systems are still developing. Lead can cause behavior and learning problems, including hyperactivity. Elevated lead levels are linked to lower IQ’s in children, which persist into adulthood. Lead, cadmium, and heavy metals have no place in children’s products.”

“We applaud Attorney General Schneiderman for pursuing the problem of toxic chemicals in children’s products, and for his commitment to approaching this with retailers, manufacturers, and vendors up the supply chain,” said Bobbi Chase Wilding, Deputy Director of Clean and Healthy New York. “The items highlighted here are indicators of a broader problem. Clean and Healthy New York has tested products across the state and found not just lead, but also cadmium and other heavy metals. These chemicals can harm children’s development and contribute to cancer and organ damage. It is unconscionable that such chemicals are used in products kids rely on. It’s time for action.”

“WE ACT for Environmental Justice applauds the Attorney General for his leadership on protecting our state’s children from heavy metals and harmful toxic chemicals in children’s products that can rob a child of a healthy future,” said Cecil Corbin-Mark Deputy Director of WE ACT for Environmental Justice. “From his earliest days as a State Senator, Attorney General Schneiderman has made it his mission to protect kids from lead.  Today, this investigation reveals that despite federal laws children in New York State are still not safe from these poisons in the toys they play with or the clothing they use. We need better laws and more testing in New. York so that all parents, not just the wealthy who can buy pricey toxic-free products, are assured of the safety of all the products they buy for their children no matter what their zip code or income.”

“The Coalition to Prevent Lead Poisoning and our community partners have been working for over a decade to eliminate all possible lead hazards from a child’s environment—be it in toys or paint in pre-1978 homes—and our community has made significant progress,” said Elizabeth McDade, Executive Director, Coalition to Prevent Lead Poisoning. “Lead is a neurotoxin that impairs the way the brain develops. The long term cognitive and health deficits a child might incur as a result of lead poisoning are permanent and devastating. Imagining that situation as a result of playing with a toy is heartbreaking. The Coalition stands with the Attorney General and we are committed to working together to make sure every child is safe from all environmental toxins.  We cannot thank Attorney General Schneiderman enough for his continued efforts to keep the children across NYS safe.”

“Unfortunately, lead exposure continues to be all too common,” said Stan Schaffer, Director, WNY Lead Poisoning Resource Center. “The sources of lead may not always be obvious. It’s very important that we prevent children from being exposed to lead, and unfortunately it shows up in many different places and products. Our federal laws help protect children, but it is necessary to enforce them, as the AG’s office is doing. Children’s products especially need to be lead free.  Young children can easily swallow objects like this type of jewelry and these objects can leech lead into their bodies with potentially harmful results. This is entirely preventable if we strictly enforce regulations prohibiting lead in children’s toys.”

Under the CPSA, manufacturers and importers have a responsibility to certify – through a “Children’s Product Certificate” – that products intended for use by children are safe and comply with limits established by the Act. This certification, which is based on third-party testing by a CPSC-accepted laboratory, must be issued by either the manufacturer or importer, and must indicate compliance with applicable limits – including the 100 ppm limit for lead. The certificate must be furnished to distributors and retailers of the product.

Lead is highly toxic, especially to children. Health professionals believe that there is no safe level of lead exposure to children. Even small amounts of lead can cause serious – often irreversible – health impacts, including harming children’s ability to learn and read, attention deficits, hyperactivity, irritability, and other behavioral problems. At high levels, lead can cause brain damage and even death. 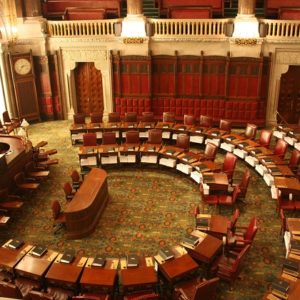