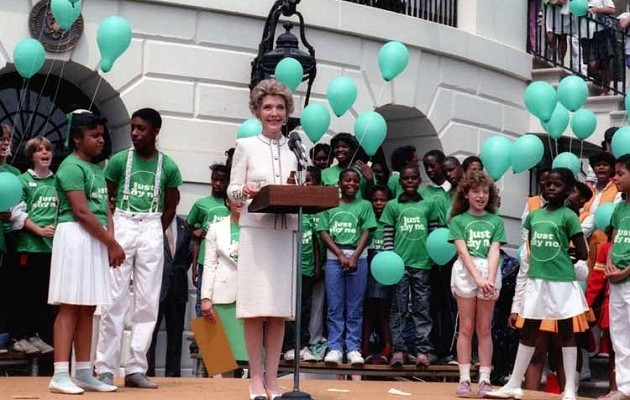 WASHINGTON – Nancy Reagan died on March 6, 2016 at the age of ninety four. She leaves behind a destructive legacy that will likely be with us for some time — Just Say No. Her unfortunate contribution to the War on Drugs seldom gets the negative treatment it deserves. The Just Say No campaign is often looked at as merely another variety of First Lady busy-work. It is anything but that.

Though Nancy Reagan has not been a force in American culture for several decades, her use of young children as props in the government’s Drug War is a lasting effect that has grown stronger with time. Every year, adolescent schoolchildren are bombarded with fear, hysteria, and misinformation about illegal drugs — those substances which the federal government finds more profitable in prohibition than when sold by pharmaceutical companies.

Nancy Reagan provided the kind, grandmotherly face to the Drug War’s targeted ad campaign of the 80s — one aimed directly at the nation’s youth. It was an effective tool, as the American government’s War on Drugs evolved into a battle to “save our children.” As all good Americans are taught, when a problem threatens children, it becomes a National Crisis in need of massive government intervention.

Schoolteachers and parents came to understand that if America’s sons and daughters were to resist drugs, they had to be reached early and often. Middle school health classes began hammering pre-teens with all of the potential dangers and horrors of smoking just one joint of marijuana (the “Gateway Drug”). But the brainwash would not stop there.

Children growing up in the Reagan 80s all remember D.A.R.E., a program begun in Los Angeles schools by the LAPD which soon spread nationwide. Now not only were illegal drugs extreme health hazards (according to one’s schoolteachers), drug use would also put children on the wrong side of the law. Uniformed police officers, always eager to flash their brass and engender obedience, marched into schools with their leashed German Shepherds and impressed on children the mighty sword of the law that would drop upon their necks after just one slip-up with drugs. This has been perhaps the only element of theJust Say No regime that is rooted in reality. Hundreds of thousands of Americans have learned that the D.A.R.E. officers were correct: Potentially lifelong incarceration awaits those who dare to discover for themselves whether illegal drugs are right for them or not.

As the sycophantic remembrances of Nancy Reagan pile up, let us remember the terror she loosed upon America’s young. And let us also note Nancy Reagan’s own hypocrisy in all of this — hypocrisy so typical of Washington’s moral crusaders. All the while she was building her infrastructure of fear, Nancy Reagan herself abused prescription pills according to her daughter Patti. So authoritarian was Nancy as a mother that Patti Reagan felt she should not have children of her own out of fear that she might abuse them, just as Nancy had abused her, emotionally and physically.

It is my hope that this hypocrisy is how Nancy Reagan is remembered as a national figure. America’s mass incarceration epidemic finds its roots her Just Say No philosophy, and that’s not worth celebrating.

PHOTO: White House Photographic Office, from Wikimedia Commons.
OP-ED: by Hugh Crane.
Made available from The Center for a Stateless Society. 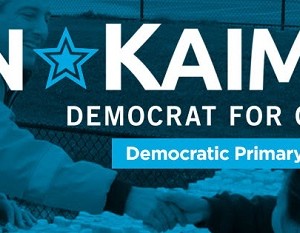 Huntington, N.Y. - The Jon Kaiman for Congress campaign today announced that it has received the endorsement of Huntington...