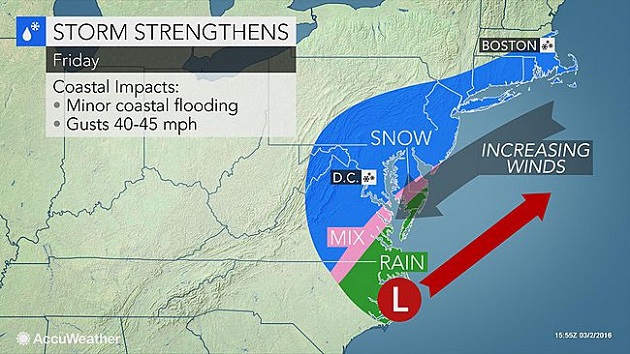 NEW YORK, N.Y. – The return of cold air into this weekend will deliver one to two rounds of snow and slippery conditions along the Interstate 81 and 95 corridors in the mid-Atlantic.

The track and strength of both systems will determine which areas pick up an accumulation on non-paved surfaces, as well as which locations experience slippery travel.

Snow to sweep from the Midwest to the mid-Atlantic, southern New England into Friday

The first system will take a path much farther south, when compared to the storm on Tuesday. The first storm will produce a general 1-3 inches of snow, mainly on non-paved surfaces.

The snow will sweep eastward over the I-70 and I-80 corridors of the Midwest during Thursday. 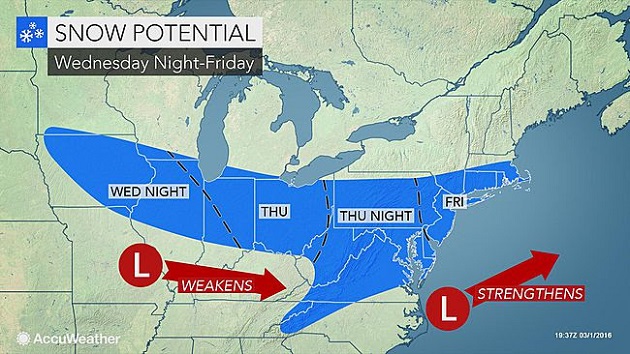 Snow will also graze the southern coast of New England during Friday into Friday evening.

Snowfall up to 6 inches could fall on parts of the central Appalachians from the storm. 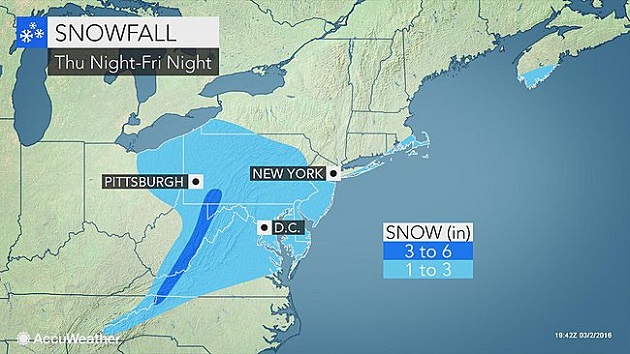 Another area where snow could fall at a heavier rate for a time will be from part of southeastern Virginia to eastern Maryland, Delaware and southern New Jersey, as well as Cape Cod, Massachusetts.

The heavier snow in the warmer areas of the region can occur as the storm strengthens. Winds will pick up along the mid-Atlantic and southern New England coasts.

“At least for now, it does not look like a widespread nor’easter that would bring heavy snow to many areas,” according to AccuWeather Chief Meteorologist Elliot Abrams.
Where the snow gets a head start during the late-night and early-morning hours, roads could become slippery and snowcovered for the morning rush hour on Friday.

Even though the air will be significantly colder than the storm earlier in the week, marginal temperatures will still cause some of the snow to melt and to be mixed with rain.

During March, when temperatures are in the 30s F, snow must fall at a heavy rate to accumulate on paved surfaces that are treated during the midday and afternoon hours.
Depending on the rate of snowfall, roads will tend to be mainly wet during the late morning and afternoon hours on Friday.

Should the storm take a jog to the north or south by 100 miles, then accumulating snow and slippery travel could reach as far north as New York City and Boston or as far south as Charlotte and Raleigh, North Carolina.

As the first storm affects part of the Atlantic Coast on Friday, another storm will drop southeastward across the Midwest.

“Unlike the past couple of weekends, the cold air will stick around during most of this weekend,” Abrams said.

The second of the two storms is likely to spread snow showers over a broad area of the mid-Atlantic.

The spotty snow will break out over the central Appalachians during Saturday afternoon and evening and spread toward the coast later at night into Sunday morning.

Since some of the snow will fall during the nighttime and early morning hours, some roads could be slippery for a time.

Beyond this weekend, much warmer conditions will move in next week. The pattern change could signal an end to wintry weather for many locations. 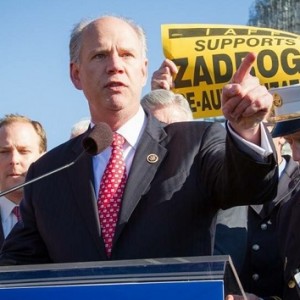 By Robert Golomb WASHINGTON - “When the planes hit the Towers on September 11, we on Staten Island and Bay Ridge, living...