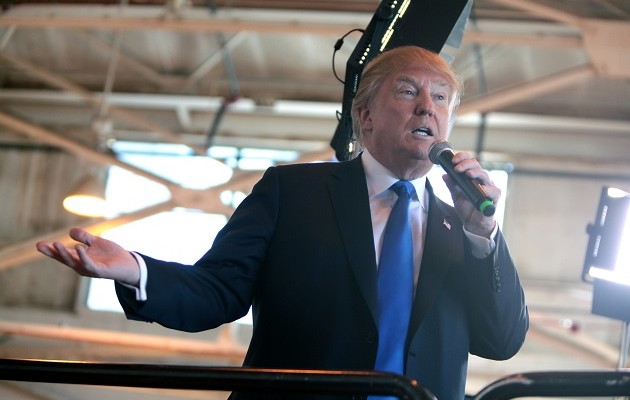 WASHINGTON – Alas, Donald Trump has backed off from his charge that the Bush administration lied the country into war against Iraq, telling a CNN town-hall broadcast Thursday night that he doesn’t know why Bush invaded. “I’m not talking about lying. I’m not talking about not lying,” he said. “No one knows why we went into Iraq.” But Trump restated the obvious: that Saddam Hussein and Iraq did not fly planes into the World Trade Center. And he again, to his credit, said the war “may have been the worst decision any president has made in the history of this country…. Whether [George W. Bush] lied or not, it was a horrible decision.” (See video.)

Trump’s shameful wimping out under firm questioning from a voter may reflect troubles in the polls — he was campaigning in South Carolina, where George W. Bush and anything military are popular — but it’s a blow to the badly needed public discussion of the disastrous war, which has destabilized the Middle East by boosting the bin Ladenites and helping to give rise to the Islamic State, first in Iraq, then in Syria, and now far beyond.

As for Trump, who seems willing to take whatever position serves his purpose at the moment, we now know that he told radio host Howard Stern on September, 11, 2002, six months before Bush started the war, that he favored the mission. (Audio here.) Asked by Stern if he approved of the coming invasion, Trump said, “Yeah, I guess so,” adding, “I wish the first time it was done correctly.”

But before he was reminded of that piece of Trumpiana, he told the town-hall audience, “I said don’t go into Iraq. It’s going to ruin the balance of the Middle East…. It may have been the worst decision anybody has made, any president has made in the history of this country.”

Asked by town-hall host Anderson Cooper about his opposite remark to Stern, Trump conceded that he “may have” said it (again, here’s the audio), chalking the statement up to his not being a politician and its being the first time he was asked the question — rather peculiar excuses. “By the time the war started, I was against the war,” Trump told Cooper. “And shortly thereafter, I was really against it.”

We have no evidence of this. The public record shows that Trump did not express opposition until 2004, over a year after the invasion, when the occupation of Iraq had obviously gone sour.

Trump has repeatedly said he was an early opponent of the invasion and even that the Bush administration asked him to keep quiet about the war. Again, he has not proved this.

All of this is really too bad. The Bush team did indeed lie its way into war with Iraq, and the war has had horrible consequences. If you doubt that dishonesty was at the core of the push for war, see this reading list compiled by Scott Horton, the best antiwar radio host around. (Also see this summary of accurate reporting during the run-up to the war and Justin Raimondo’s “Were We Lied into War?”) It doesn’t take much Googling to learn that the administration was lying big time and that he was called out at the time.

So where does that leave us? Trump’s reversal enables anyone who refuses to even consider that the U.S. government would lie its way into a war to say, “See? Even Trump doesn’t say that anymore.” That’s too bad.

The reversal and revelation from the Stern show also demonstrate what we already knew: that Trump can’t be trusted. Some have grasped onto a few isolated flashes of foreign-policy realism in Trump’s statements, such as his criticism (at least now) of the bombing and regime change in Libya, of regime change in Syria, and his apparent reluctance to confront Russia in Syria. But what reason has he given us to think he really believes anything he says? He’s been on all sides of issues over the years. Moreover, his alleged realism must be judged against his promise to make the military so powerful that “no one will mess with us.” How does he define “mess with us”? Considering the size of his ego and his thin skin, I shudder to think what he as “commander in chief” would regard as an adequate reason to use military force.

I see no way for advocates of a pacifist foreign policy to find comfort in Trump. The fit just is not there. Of course, no Republican rival is any better, and rhetorically they are all far worse. And the Democrats? Hillary Clinton’s foreign policy would be just as much at home on the Republican side. The war party is really a unified entity, despite some surface differences. And yes, Bernie Sanders’s record is terrible, even allowing for his vote against the Iraq war resolution. He favors U.S. bombing in Syria and elsewhere, and he wants to get Saudi Arabia and other Arab governments to fight the same jihadis they’ve encouraged for so long in their campaign against Iran. Moreover, Sanders has shown little interest in foreign policy during the campaign. Still I can’t help but think that Sanders’s disposition is more consistent with a noninterventionist foreign policy. Maybe it’s no more than a gut feeling, but it’s something.

I generally see no good reason to vote, and I certainly wouldn’t give money to a candidate. But I confess that I sometimes root against a particular candidate. If Sanders gets the nomination, I expect I’ll be rooting for the Republican to lose.

PHOTO: Gage Skidmore, from Flickr.
OP-ED: by Sheldon Richman.
Made available from The Center for a Stateless Society. 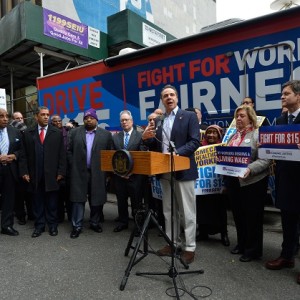 NEW YORK, N.Y. - Gov. Andrew Cuomo has taken his call for a statewide minimum wage of $15 an hour on the road. Surrounded...