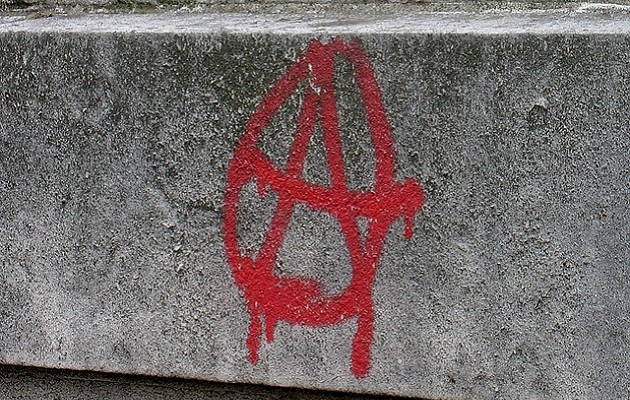 WASHINGTON – Anarchist characters are a rarity on television. (Sorry, the “Sons of Anarchy” aren’t actually anarchists.) But the CW’s popular show “Arrow,” based on the DC Comics character Green Arrow, recently introduced a new character, Lonnie Machin, whose outlook is explicitly presented as anarchist.
So how does Machin’s anarchism manifest itself?

Well, he’s only appeared in two episodes so far, but those episodes have kept him pretty busy. In his first appearance he electrocutes innocent people; kidnaps a young woman to use as a hostage; and when she is rescued, expresses disappointment that he won’t get to spend hours torturing her (said torture implied to include rape, though this isn’t said explicitly). He’s also eager to work for the show’s archvillain, but is rejected by that villain as being too extreme!

Then, in his second appearance, Machin kills his foster parents and uses their blood to paint anarchy symbols on the walls; he also threatens to torture the wife and young child of his enemy, though the same rescuers deprive him of his fun this time too.

One has to wonder what strange animus the show’s writers have against anarchists – and whether they’ve ever actually met one.

Anarchism is a political philosophy that favors voluntary social organization, and opposes all forms of domination and coercive authority, including the state. Anarchists are committed to treating other people as equals, rather than as either masters or subordinates. Given the anarchist movement’s particular stress on opposition to violence against women, Machin’s treatment of his female hostage seems especially incongruous.

Historically, anarchists have been at the forefront of movements for women’s equality, worker empowerment, and the abolition of slavery; among the better-known anarchist thinkers are Henry David Thoreau, Leo Tolstoy, Emma Goldman, and today, social critic Noam Chomsky and science-fiction writer Ursula Le Guin. I’m fairly sure none of these writers has been found torturing people or painting the walls with their blood.

The association of anarchism with violence in the popular mind is due, in part, to the fact that in the late 19th and early 20th centuries, many anarchists embraced a policy of bombing and assassination. While this policy was a disaster both morally and strategically, it’s worth keeping three things in mind:

1. This approach hasn’t been dominant in the anarchist movement for over a century (and was controversial among anarchists even back then). Most anarchists pursue their goals through education, grassroots organizing, and building alternative institutions.

2. When anarchists did engage in violence, their aim was generally to spark resistance to oppressive institutions, not to sow chaos for its own sake.

Why, then, do the writers of “Arrow” feel the need to perpetrate such a hateful distortion of anarchists?

Incidentally, Lonnie Machin is not a character original to the show; he originally appeared in the comics as the positive and heroic vigilante Anarky, created by Alan Grant and Norm Breyfogle in 1989. So the show’s portrayal of Machin is a slap in the face not only to anarchists generally but to the character’s creators as well.

The “Arrow” writers’ hostility to anti-authoritarian activists does not end with Machin. Felicity Smoak, one of the show’s main protagonists, has a past as a hacktivist; while she is not portrayed as having been an anarchist, anarchists have been prominent in such hacktivist movements as WikiLeaks and Anonymous, and making government secrets public is something anarchists tend to favor. But in a recent episode, Felicity notes that while she would once have exposed government secrets by posting them on public websites, she now rejects her hacktivist past as the mistake of an angry young woman, and even goes so far as to burn a photograph of her earlier self.

Here “Arrow” seems to be following in the footsteps of another comic-book-based show, ABC’s “Marvel’s Agents of S.H.I.E.L.D.,” whose protagonist Skye starts out as a hacktivist for a WikiLeaks knockoff called “Rising Tide,” only to “reform” by joining a government spy organization.

It doesn’t seem to be illegal activity as such that the writers of “Arrow” and “Agents of S.H.I.E.L.D.” oppose; the reformed Felicity works for an illegal vigilante outfit, and Skye’s government employers become a private illegal group in the second season. In abandoning anarchist-flavored hacktivism, Felicity and Skye are embracing not legality but rather secrecy; though outside the state apparatus, they’re as committed as any government agent to seeing themselves as part of an elite that deserves to know truths it cheerfully conceals from the public.

PHOTO: Phil, from Flickr.
OP-ED: by Roderick Long.
Made available from The Center for a Stateless Society. 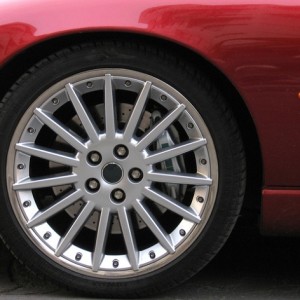 LONG ISLAND, N.Y. - It has come to the attention of the Nassau County Police Department that Tire and Rim larcenies are frequently...