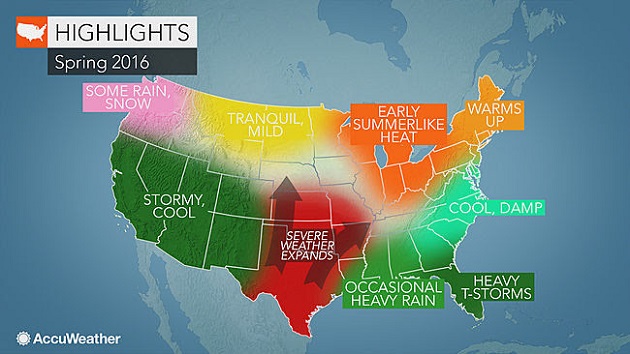 New York, N.Y. – AccuWeather reports Punxsutawney Phil failed to see his shadow on Feb. 2, 2016, indicating an early start to spring for the United States. The decision marks only the 18th time Pennsylvania’s most famous groundhog hasn’t seen his shadow since the tradition began in 1887.

For the Northeast and mid-Atlantic, AccuWeather meteorologists are concerned for just the opposite, as cold air and the potential for snow will linger into the start of March. Elsewhere, springlike severe weather isn’t predicted to become widespread until April.

The full 2016 U.S. spring forecast can be found below.

Warm weather lovers in the mid-Atlantic and Northeast will have to be patient, as winter plans to linger into March across both regions.

Cold air and stormy weather will take the stage from late February into the start of March, opening the door for a potential late-winter snowstorm.

“There could be a last surge of winter before we see the transition into spring,” AccuWeather Long-Range Meteorologist Paul Pastelok said. “For the Northeast, there’s still an opportunity for some snow, although there’s a higher chance that we’ll see a cold snap rather than a big snowstorm.”

A quick warmup will follow, however, allowing milder air to arrive faster than it has in the past two years for both regions.

“A lack of arctic air in the region and the sun getting higher and higher in the sky will make it feel pretty nice, I think, by mid-March in the Northeast,” Pastelok said.
Through April, the weather pattern will lend itself to the occasional damp and dreary day before a turnaround in May.

“Big cities around the Great Lakes will have nice weather for outdoor projects and early planting in May,” Pastelok said. “Expect mild temperatures, frequent sunshine and cooler nights.”

May could also yield drought concerns for the Great Lakes and Ohio Valley, prompting some early season heat. During the same month, the threat for severe weather will loom for the mid-Atlantic.

Spring will kick off with periods of wet weather across the Southeast, increasing the risk for flooding throughout the region. Florida, Georgia and South Carolina will be at an especially high risk.

From late February through March, the threat for severe thunderstorms will ramp up in Florida. Elsewhere however, severe weather will get a slow start with below-normal tornado totals predicted for the month.

Come April, warmer air will help to fuel severe storms, allowing multiple, widespread outbreaks to occur. Atlanta, Charlotte, North Carolina, and Chattanooga and Nashville, Tennessee, are all in the line of fire.

In the Gulf Coast states, the severe weather may turn into flooding events during April and May.

Those concerned for early tropical development can breathe a sigh of relief: The chance for an early impact will be low.

Severe weather to ramp up in April for Plains, Mississippi Valley, Midwest

Stable air in place across the central Plains and the Mississippi Valley during March and early April will help to hold back severe weather.

However, that will change as April progresses and storms track from the Southwest, leading to increased severe weather in the central and southern Plains, Mississippi Valley and Midwest.

“Intense warmth ahead of these storms coming out of the West is going to promote severe weather. Those are the ingredients you need,” Pastelok said.

“The thing that worries me the most is that it could turn into heavy rain producers that could lead to flooding. And we’ve seen lots of flooding already over this past winter season in the Mississippi Valley.”

Across the southern Plains states, flooding this year is not predicted to be as severe as last year, when between 15 and 20 inches of rain inundated Oklahoma and Texas.

An El-Nino weather pattern has delivered rain and mountain snow to the western United States this winter, and that trend will largely continue during spring.

Drier-than-normal conditions will affect the Northwest in March; however, the rest of the West may continue to have surges of moisture into April.

Snow is forecast to fall across the high ground of the central and southern Rockies in March. In California, abundant precipitation could lead to additional flooding problems.

“Throughout the winter, the focus for precipitation has been on both northern and central California. While this will continue to be the case into spring, one or two systems are on the radar for Southern California in March,” Pastelok said.

Rain and mountain snow have helped to ease short-term drought woes in the Golden State, but the long-term water crisis will continue.

Continue to check back with AccuWeather.com for the latest details. This entire weather report, including quotes and images are brought to you courtesy of AccuWeather.com. 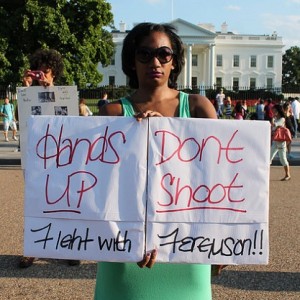 Ferguson, M.O. - Back in August 2014 a man named Michael Brown was shot by a police officer, Darren Wilson. Brown was unarmed...