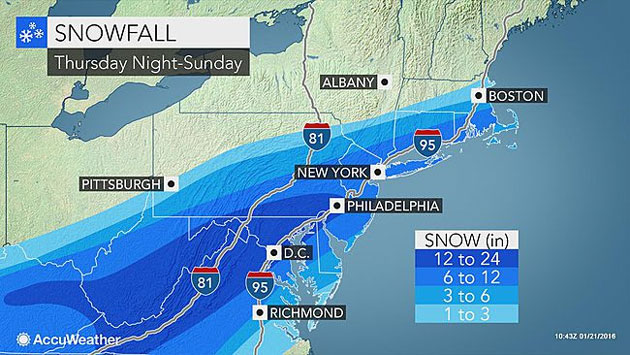 NEW YORK, NY – AccuWeather reports a blizzard will threaten to bring travel to a standstill from Washington, D.C., to New York City as well as across the southern Appalachians by the weekend. Heavy snow and wind will also slam southern New England.

Winds and the rate of snowfall will increase as the storm strengthens. Thunder and lightning could accompany the heavy snow in some locations. An all-out blizzard will unfold from northern Virginia to southwestern Connecticut. White-out conditions will occur farther west from south-central Pennsylvania to part of western North Carolina.

Virginia Governor Terry McAuliffe declared a state of emergency at 8 a.m. EST on Thursday, Jan. 21, 2016, to help channel state assistance to local communities fighting the storm. Other states were following suit in advance of the storm.

The storm is likely to shut down some highways and could cause some airports to close. Ahead of the storm, Delta Air Lines announced travel waivers for flights through Jan. 24 at 19 different airports in the Northeast and mid-Atlantic region. 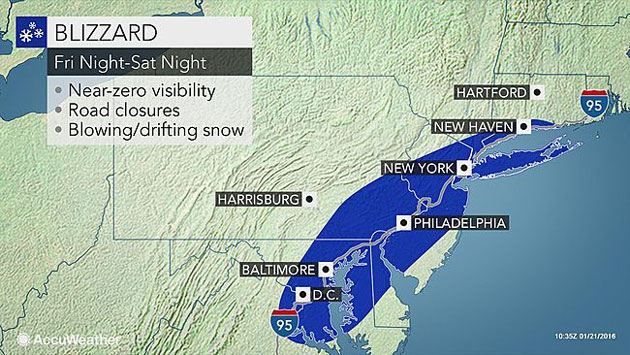 According to AccuWeather Chief Meteorologist Elliot Abrams, “This will be a rare event for the region as there are not many storms that bring a foot or more of snow over such a large area.”

The swath that could receive a foot of snow from the storm is likely to extend along a 1,000-mile path from the Mississippi River to southern New England.

The storm began to produce snow and ice over the middle Mississippi Valley on Thursday and will expand to parts of the South and the Ohio Valley into Friday morning. Snow will spread slowly northeastward through the mid-Atlantic and southern New England during Friday afternoon into Saturday, before exiting southeastern New England on Sunday.

“The greatest disruptions will be where the storm begins through Friday,” Abrams said. “People could get stuck on the roads during the weekday commutes, where schools are not canceled and businesses are not closed, from the central and southern states to the mid-Atlantic.” 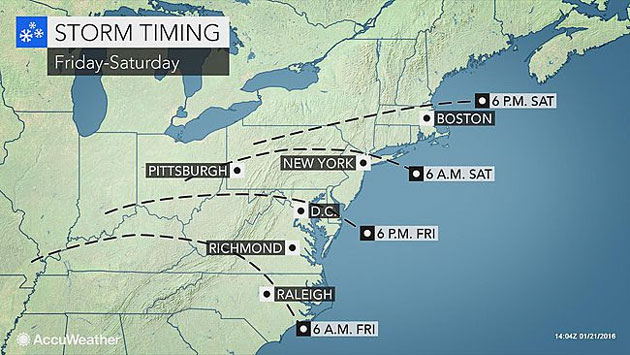 The New York City metro area will receive enough snow to shovel and plow with blizzard conditions at times. Part of the region can receive a foot of snow from the storm.

The rate of snow and travel conditions will trend progressively worse farther to the southwest. From southwestern New Jersey to western Virginia, snowfall rates will be 1-3 inches per hour at times.

Areas from Philadelphia to Baltimore and Washington, D.C., can expect an all-out blizzard with snowfall averaging 12-18 inches. There is the potential for greater amounts of snow, depending upon the track and speed of the storm.

From southwestern Virginia and the West Virginia mountains to northern Maryland and parts of south-central and southeastern Pennsylvania, a general 1-2 feet of snow will fall with accumulations in localized areas between 2 and 3 feet. Increasing winds will cause blizzard conditions with extensive blowing and drifting of snow.

“Crews may not be able to keep up with the storm in parts of Virginia, West Virginia, southern Pennsylvania and northern Delaware and Maryland,” AccuWeather Senior Meteorologist Henry Margusity said. “Some communities could be isolated for a few days.”

The heavy snow with the storm is likely to have a fairly sharp northern edge due to dry air. At this time, the northern edge is most likely to extend from southern Ohio to southern New England. A distance of less than 50 miles could bring snowfall ranging from an inch or less to more than a foot.

Heavy snow is still likely right along the southern coast of New England with enough snow to shovel and plow from Hartford, Connecticut, to Plymouth, Massachusetts. Up to a few inches of snow may fall in the Boston area with the greatest amounts south of the city.

According to AccuWeather Meteorologist Ed Vallee, “Above-average water temperatures in the Atlantic Ocean will factor into the storm near the coast to perhaps as far west at I-95 in the mid-Atlantic.”

The milder air coming in from the ocean will cause more mixing along coastal areas.

For this reason and the potential for dry air to be drawn into part of the storm, accumulations will likely be held to under a foot in most areas from central North Carolina and southeastern Virginia to central Delaware, southern and coastal New Jersey, Long Island and Cape Cod. 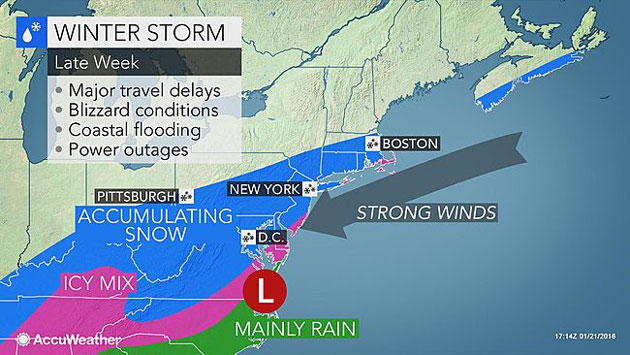 For areas receiving a mixture of snow, ice and rain, this will still be a formidable winter storm. Power outages are likely. Travel will be difficult, if not dangerous, as roads become slippery or where poor-drainage area flooding occurs.

Winds will become a factor in the storm. Winds will not only push the snow around and lead to whiteout conditions in some areas. Atlantic Ocean water will be pushed toward the coast.

Along the mid-Atlantic and New England coast, a period of rough seas, coastal flooding and beach erosion is in store. The worst conditions will be in New Jersey, Delaware, Maryland and Virginia, where tides may run 2-3 feet above normal in some locations. The conditions include the western shoreline of the Chesapeake Bay. 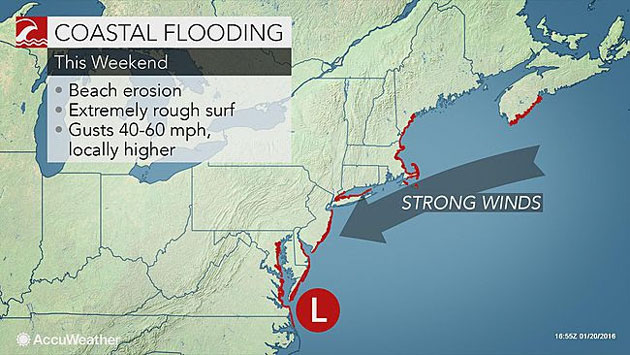 The approaching full moon will cause high astronomical tides around the days where the storm will be near the coast, elevating the coastal flooding risk.

Winds can be strong enough over the mid-Atlantic and in southern New England to bring down tree limbs and cause sporadic power outages. 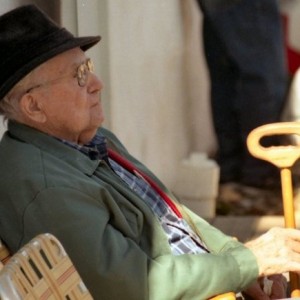 NEW YORK, N.Y. - Depression is the most common mental health problem that older adults face, according to the Centers for Disease...