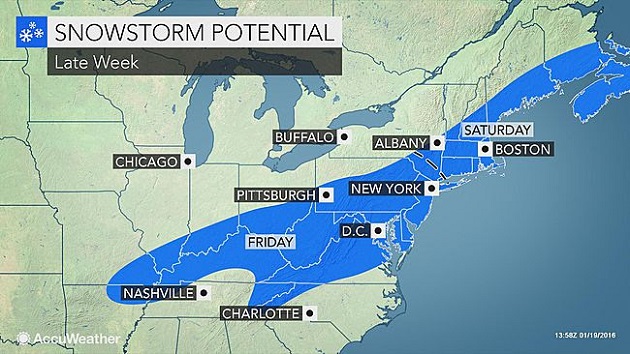 AccuWeather Global Weather Center – January 19, 2016 – AccuWeather reports a major winter storm will hit the eastern United States with the potential for heavy snow to impact more than 50 million people at the end of the week.

According to AccuWeather Senior Meteorologist Dave Dombek, “We are just now at the point [of the winter] where the air is cold enough with the ongoing storms to awaken a sleeping giant in terms of a snowstorm.”

Unlike most storms so far this winter, this system will have enough cold air to produce snow and disruptions to daily activities in areas of the East that have received little thus far.

The exact track of the storm will hold the key as to which areas in the mid-Atlantic and southern New England are hit with heavy snow, dangerous highway travel and scores of flight delays and cancellations during Friday into Saturday.

The heavy snow with the storm is likely to have a fairly sharp northern edge. At this time, the northern edge of the storm is most likely to extend from southern Ohio to southern New England. A distance of less than 50 miles could bring snowfall ranging from an inch or less to more than a foot.

If the storm develops to its full potential and takes a track just off the mid-Atlantic and New England coasts, then a blizzard can unfold. The storm could shut down highways and perhaps cause airport closures.

According to AccuWeather Chief Meteorologist Elliot Abrams, “This could be a long-duration snowfall that could last more than 24 hours in some locations.”

This is also the type of storm that is likely to produce a very heavy rate of snow.

Based on the most likely storm track at this early stage, areas from the Virginia and West Virginia mountains to the major cities from Washington, D.C., to Baltimore and Philadelphia, as well as the suburbs, are included in the swath of heavy snow potential. 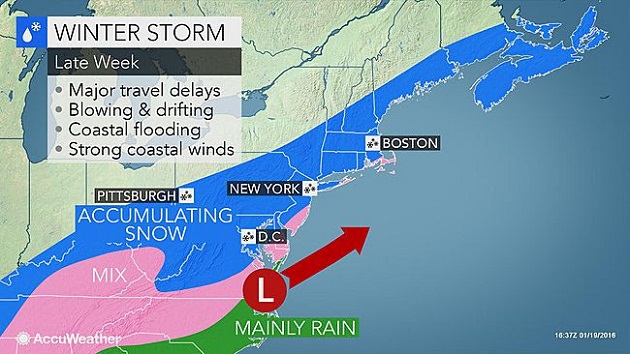 Since the storm will strengthen rapidly, reduce its forward speed and tap plenty of moisture from the Gulf of Mexico and the Atlantic Ocean on its path, snowfall rates of 1-3 inches per hour are possible. There is the potential for the hardest-hit areas to receive 1-2 feet of snow or more from the storm, where rain does not mix in.

According to AccuWeather Senior Meteorologist Brett Anderson, “Should the storm continue northeastward, rather than turn more to the east at the last minute, New York City, Boston, Providence, Rhode Island, and Hartford, Connecticut, would also be buried in snow.”

A wintry mix is likely to occur from northwestern North Carolina to the Delmarva Peninsula, southern New Jersey and Long Island.

Exactly how much snow accumulates in the coastal areas will depend on the amount of rain, if any, that mixes in.

In the swath of the heaviest snow, motorists who venture out during the storm could become stranded.

Thunder and lightning could accompany the heavy snow in some coastal locations.
As the storm strengthens near the coast, winds will increase, and blowing and drifting of snow will occur.

Where the snow becomes wet in nature, the weight of the snow and strength of the wind could lead to downed trees and power outages.

Along the mid-Atlantic and New England coast, a period of rough seas, minor coastal flooding and beach erosion can occur. The approaching full moon will cause high astronomical tides around the days where the storm will be near the coast, leading to heightened coastal concerns.

The wintry mix will ramp up over the southern Appalachians and part of the Ohio Valley during Thursday night.

On Friday, the wintry part of storm will focus on the mid-Atlantic region.

Part of New England would be most affected by the storm from Friday night into Saturday night.

A shift in the storm track by 50-100 miles farther north would allow precipitation to become mixed with or change to rain in the I-95 corridor. A more northerly track would push the heaviest snow across the northern Appalachians. 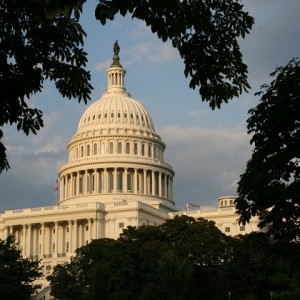 NEW YORK, N.Y. - Government is more than a territorial monopoly on aggressive force. It’s also the heir to a centuries-old...