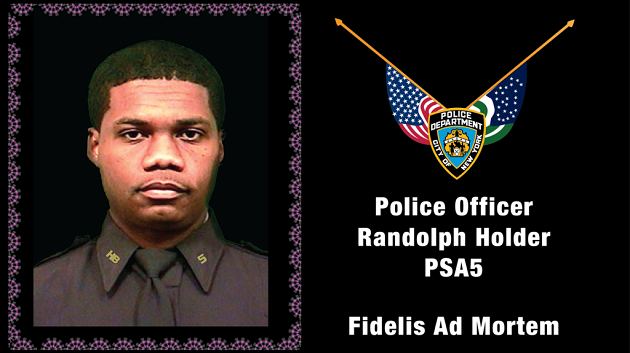 LONG ISLAND, NY – An officer and five-year veteran of the New York City Police Department was killed in the line of duty last night, October 20, 2015. According to Police, Officer Randolph Holder, 33 was murdered while he and his partner were responding to a gunshot call around 8:30PM. According to the report, Holder and his partner were assigned to an incident in the vicinity of East 102nd Street and First Avenue in the East Harlem area of Manhattan.

Police Officer Holder was fatally shot; a wounded suspect was apprehended 4 blocks away.

In a statement by the NYPD, witnesses reported that male subjects fled on foot north on the FDR Drive after a male victim had his bike stolen at gunpoint by one of the subjects. While fleeing  police, gun shots were exchanged between officers and the individuals which resulted in Officer Holder being struck in the head.

The suspect was apprehended at 124th Street by other responding officers and suffered a gunshot wound to his leg while other unidentified males involved in this incident taken into custody.

Officer Holder was transported to Harlem Hospital where he was listed in critical condition and subsequently pronounced dead at 10:22 p.m. Holder was also a native and police officer in Guyana, a Country in South America.

“This sadness is so hard to describe, what everyone is going through, and we’re fighting to understand the loss of a man who did so much, cared so much, dedicated his life to protecting others; as you heard from the commissioner, an immigrant who wanted to give back to his city and his country, and who had an exemplary record as a police officer, who did everything the right way. We honor the memory of Officer Holder, a man who, in the words of Abraham Lincoln, gave the last full measure of his devotion on behalf of the city he loved,” said Mayor de Blasio at a press conference at the Harlem Hospital Center.

Commissioner William Bratton, NYPD said that there were three generations of police in Holder’s family. His grandfather and father were both police officers with Holder being the last generation.

James Carver, who is President of the Nassau County Police PBA also released a statement in response to the Death of Officer Holder.

”Our heartfelt prayers go out to the family of  five veteran police officer Randolph Holder. He is a true hero by putting his life on the line to protect the citizens of the City of New York. Having grown up in a cop family in Guyana as the son and grandson of police officers, his family dedicated themselves to law and order and he will be remembered  as one of New York’s and Guyana’s finest. The members of the Nassau County Police Department PBA  express our their deepest sympathy to to the N.Y.P.D for this tragic loss of a fine officer,” said Carver.

Pat Lynch, who is President of the Patrolmen’s Benevolent Association asks for support in this time of grief. 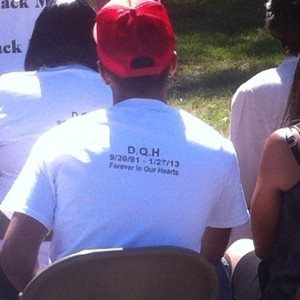 LONG ISLAND, NY - Suffolk County Police have arrested three people in connection with the shooting death of a Flanders man that...