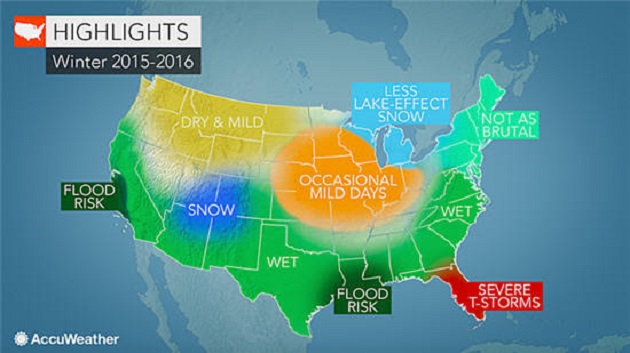 By Justin Roberti  Meteorologist for AccuWeather.com

NEW YORK, NY – According to AccuWeather’s 2015-16 U.S. Winter Forecast, winter will kick off with mild weather in the Northeast and mid-Atlantic as an intensifying El Niño influences the weather pattern across the country.

El Niño will drive heavy rain and mountain snow to California, helping to replenish reservoirs but also threatening to cause flooding and mudslides. Meanwhile, a rain deficit will continue to build in the Northwest.

A regional breakdown of the AccuWeather.com 2015-2016 U.S. Winter Forecast can be found below.

After the winter of 2014-2015 brought brutal cold to the northeastern United States, this season is set to be milder overall, but particularly during the early part of the season.

“We just don’t know exactly yet whether or not we’re going to see the pattern turn cold and snowy,” AccuWeather Expert Long-Range Forecaster Paul Pastelok said. “…There is an opportunity that [the weather] could change on us as we get into February and early March.”

Regardless, the Northeast and mid-Atlantic can expect fewer days of subzero temperatures than last year. February of 2015 went down in the record books as the second-coldest February on record for both the region and for eight states individually, including Pennsylvania, New York and all six New England states.

Farther west, in the Great Lakes region, a lack of arctic air for much of the early and midwinter will lead to a weak lake-effect season, causing snowfall and precipitation totals to fall below normal.

Upstate New York and northern New England are not in the clear, however, as rain events along the coast early in the season can translate to snow in the higher elevations.

As one of the strongest El Niños in the last 50 to 60 years continues to develop, it’s likely that heavy rainfall and severe weather will take aim at the Southeast and Gulf Coast.

Overall, heavy rain will be widespread for the South. As the season progresses, additional rain on an already saturated ground will increase the chances for flooding.

“As far as the biggest impacts go, I would look at Shreveport and New Orleans, Louisiana, and Mobile, Alabama. I think those areas are going to get hit with a lot of rain,” Pastelok said.

Wintry weather will become active early on in the northern Plains, with the potential for a few snowstorms as early as November and December.

As is typical for this region, however, the weather pattern will be a roller coaster, causing wintry weather to back off in the middle of the season and return again just before spring.

“There will be a good portion of the middle part of the season where [the weather] doesn’t do a lot, but the bookends can get pretty active,” Pastelok said.

At times, temperatures in the north-central Plains could soar into the 50s or even the 60s F for a couple of days as mild weather is pushed out from the Northwest and northern Rockies.

In the southern Plains, the building El Niño will dictate an active southern storm track, meaning the region could end up with above-normal precipitation.

Below-normal precipitation, in the form of both rain and snow, and above-normal temperatures will define the season across the Northwest and northern and eastern Rockies.

For the season as a whole, the region is likely to end up with snowfall totals much below normal.

“Ski areas in the northern Rockies may be missing out on significant fresh snowpack. They’re going to have to make most of their snow at night,” Pastelok said.

The dryness across the area could eventually translate to building drought conditions if spring rain is not abundant.

Wet and snowy conditions will frequent the southwestern United States this winter.

“It may not happen early on, but by the middle of the season, I think they’re going to get hit very hard and frequently,” Pastelok said. “That’s going to put a lot of snow in the mountains and cause a lot of rain in the valley and desert areas.”

“Phoenix, Arizona, and Albuquerque, New Mexico, should prepare for significant precipitation this season. “These cities are not going to miss out this year,” according to Pastelok.

Across the region, a few precipitation events will occur during November and December, but things will pick up deeper into the season.

“There’s good news and bad news for California,” according to Pastelok.

El Niño will help to set up a pattern of rain and snow for California, which is still dealing with devastating drought conditions and rampant wildfires.

Copious amounts of rain from systems over the same area, a theme which occurs often during this type of weather pattern, can lead to problems for California.

“[The heavy rain] is going to lead to patterns in the mud where water will travel rapidly and lead to flooding,” Pastelok said. “It’s going to lead to developing streams and rivers that are not supposed to be there, and you’re going to get localized street flooding in the cities.”

Mudslides and basement flooding may also prove devastating for homeowners.

However, there’s a silver lining: The 2015-2016 season may yield triple the amount of snow than that which fell last year in the central and northern mountains.

“This is what fills the reservoirs in the spring and early summer,” Pastelok said.
Central California will finally experience the feast that follows famine. Pastelok believes his forecast may even be conservative for this area.

While the rain and snow will put a dent in the water crisis, it won’t result in the be-all and end-all residents are hoping for.

“Will it be enough? I think we need a couple of these kinds of years and I’m not sure we’re going to get that,” Pastelok said. 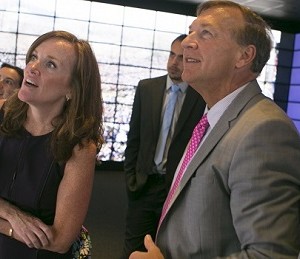