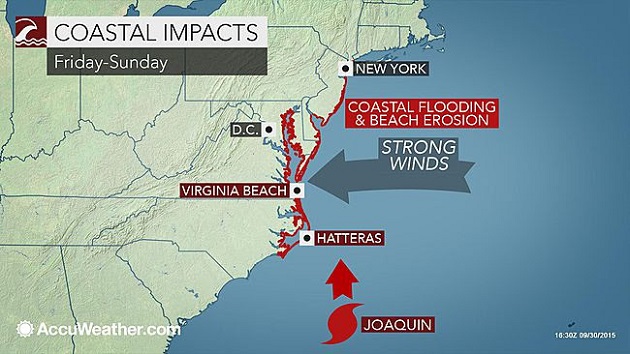 Accuweather: Major Hurricane Joaquin to Impact Over 65 Million From South Carolina to Massachusetts

NEW YORK, NY – AccuWeather reports flooding from Hurricane Joaquin will impact areas from South Carolina to Massachusetts regardless of whether it makes landfall or if the center stays out to sea.

People should not let their guard down due to a shifting track of the hurricane as the risk to lives and property in this complex situation remains high.

A copious amount of moisture will unload very heavy rainfall along parts of the Atlantic Seaboard and the Appalachians into early next week. Strong winds, coastal flooding and beach erosion will occur and could be very damaging even in the absence of a landfall.

The storm will bring pounding surf, dangerous seas, strong winds, drenching squalls and flash flooding to the central Bahamas. Wind gusts could reach between 75 and 100 mph on some of the islands.

As a result, Joaquin will threaten lives and property in the Bahamas into Friday.

Bahamasair has canceled flights for Thursday in parts of the islands.

Joaquin will turn to the north this weekend.

Governors in Virginia, New Jersey and North Carolina have issued a State of Emergency. Other states may follow suit. 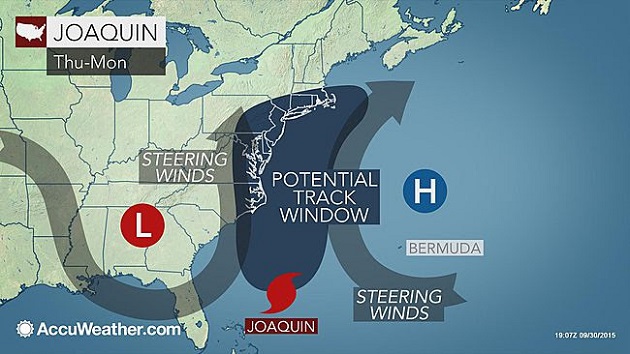 Joaquin has strengthened significantly and continues to hover near the Bahamas on Thursday. This delay has altered the forecast track. Other weather systems impacting
Joaquin will be in slightly different positions as a result.

Joaquin will move northward much of this weekend, roughly paralleling the East coast. There is nearly equal possibility the storm will make landfall along the mid-Atlantic coast, the New England coast or veer out to sea.

Due to the potential close proximity of the hurricane to the coast, people from the Carolinas to Massachusetts will need to closely monitor the track and strength of Joaquin for high wind and coastal flooding concerns. 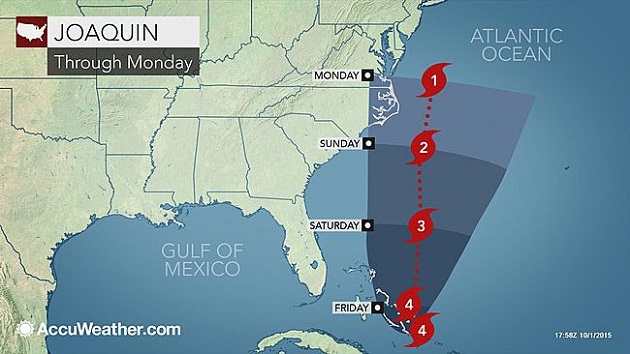 Should Joaquin make landfall, areas near and north of the center would face the worst coastal flooding and strong winds.

If Joaquin fails to make landfall in the mid-Atlantic and does not escape out to sea, then New England could face the brunt of the storm with deteriorating conditions early next week.

In some areas, heavy rain will fall on top of what has already fallen earlier this week. Flooding rainfall will occur well ahead of Joaquin’s arrival and even if Joaquin stays at sea.

According to AccuWeather Chief Meteorologist Elliot Abrams, a large arm of heavy rain from the Atlantic will pivot westward and southward into the weekend.

“The worst flooding will be where it rains the longest or the near the pivot point,” Abrams said. “That point is likely to be centered on the Carolinas and Virginia this weekend.” 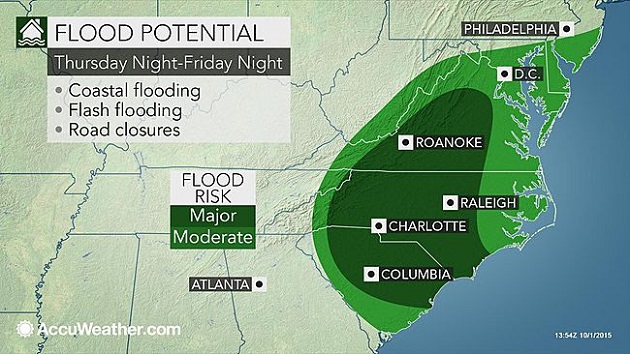 For this reason, people should not focus on only the projected path of Joaquin but also on the projected heavy rainfall hundreds of miles away from the storm’s center.
Power outages could occur in addition to flooding as substations get flooded and waterlogged trees topple over.

Through Sunday, the rounds of heavy rain will likely be of shorter duration in the northern mid-Atlantic and could be very brief in New England. 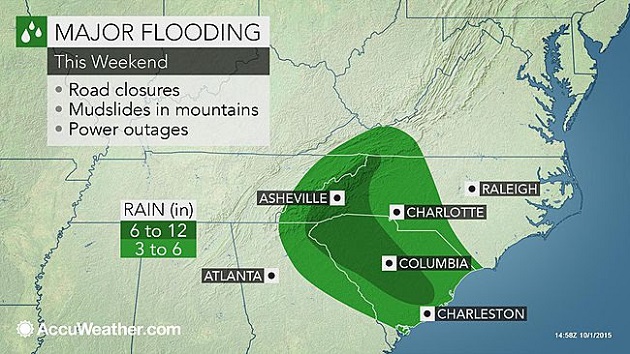 If the area from Maryland to Massachusetts gets long-lasting rain from Joaquin, it is most likely to be early next week. Any inland flooding prior to this time will be limited to urban areas and along small streams.

Farther south from Virginia to the Carolinas, the threat for widespread flash flooding will increase, along with the potential for river flooding.

Rivers that bear close watching for flooding include the New, Tar, Meherrin, Savannah, Shenandoah and James.

Like flash and urban flooding, coastal flooding and beach erosion will occur well away from the storm center and ahead of the storm, even if the storm remains at sea.
Onshore winds from the east and northeast will push the Atlantic Ocean water toward the coast, causing it to pile up around the barrier islands and bays. This is known as coastal flooding.

Winds, seas and tide levels will continue to build from the Carolinas to Massachusetts through the weekend.

East to northeast gusts may frequent 40 mph well ahead of Joaquin’s approach.

The onshore winds alone, in absence of Joaquin reaching the coast, could cause water levels to rise to an average of 2-3 feet above normal tides. These conditions are likely to occur hundreds of miles to the north of the storm’s center.

Winds could become strong enough to down trees and power lines and cause minor property damage.

Much more severe winds, waves and coastal flooding would occur if landfall occurs, near and north of the center.

Those in the projected path of the storm should be preparing for the potential rain and wind from Joaquin. Residents in coastal areas should be ready to evacuate if orders are given. 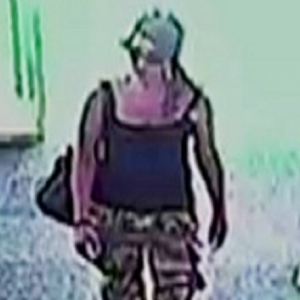