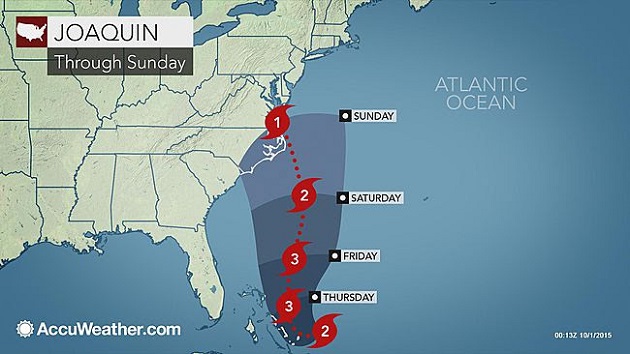 Accuweather: How Will the Impact of Hurricane Joaquin Compare to Superstorm Sandy, Hurricane Isabel?

NEW YORK, NY – Questions have been raised about the similarity to Joaquin with other recent hurricane strikes in the mid-Atlantic states.

According to Mike Smith, senior vice president and chief innovation executive of AccuWeather Enterprise Solutions, “There is going to be catastrophic flooding from North Carolina to Massachusetts, and this is going to disrupt the economy regardless of whether or not Hurricane Joaquin makes landfall.”

No matter how similar the pattern may seem, no two storms are ever exactly alike. The same can be said about the situation developing this weekend along the Atlantic coast with the approach of Joaquin.

A slightly different storm track and the position of other weather systems nearby can translate to huge differences in the weather that occurs at a particular location. The angle and strength of the storm’s approach compared to geography and whether or not the storm is strengthening or weaken at landfall can be huge factors in the severity of the weather that occurs. 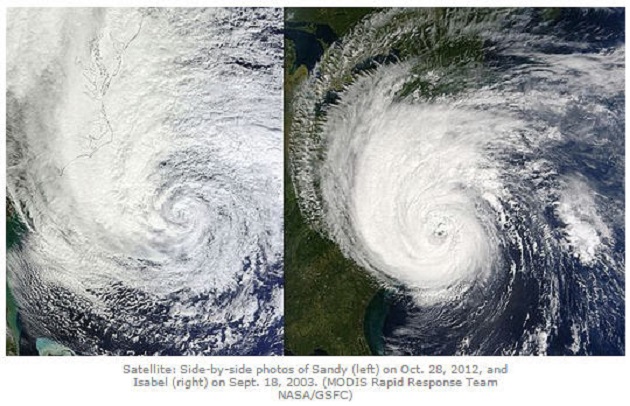 Joaquin will deliver beach erosion, coastal flooding, inland flooding from heavy rain and stiff winds near the coast, prior to its arrival more than 100 miles away from the point of any landfall. Exactly where Joaquin comes ashore and how strong it is at landfall will determine the severity of the conditions from the Outer Banks of North Carolina to the Delmarva Peninsula, New Jersey and the New York City area and as far inland as Washington, D.C., Baltimore and Philadelphia.

For the number of people now living along the mid-Atlantic coast that did not experience Sandy or Isabel, this storm could deliver rough weather. In both Sandy and Isabel, gusty winds and flooding occurred well away from the center of the storms.

In October 2012, Sandy originated from the western Caribbean and paralleled the southern Atlantic coast into Oct. 28, before making the abrupt left turn toward the New Jersey coast. 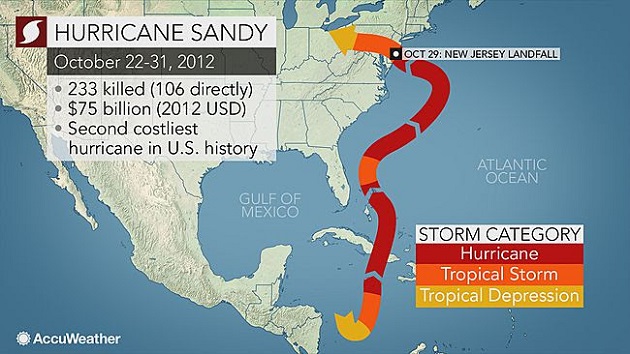 High pressure to the north helped to funnel winds in from the east and direct Sandy westward. The shape of the coast of northern New Jersey and Long Island helped to funnel the Atlantic Ocean water.

Sandy was the second costliest hurricane in United States history with damage at $75 billion. More than 200 people lost their lives from the Caribbean through the U.S.

In September 2003, Isabel originated from off the west coast of Africa and took a direct northwestward path from just northeast of the Bahamas and into eastern North Carolina.

This path flung the strongest winds over the Chesapeake Bay region. In addition to heavy rain, Atlantic Ocean and bay waters were funneled up the Chesapeake Bay, which resulted in substantial damage. The increasing forward speed of Isabel helped to maintain strong wind gusts well inland. 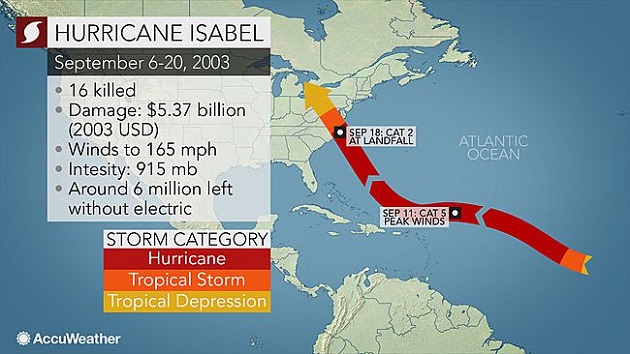 Prepare Now Regardless of Similarities, Differences

While there will be no Tropical Storm Henri arriving ahead of Joaquin, unlike in 2003, there has been heavy rainfall prior to Joaquin this time.

The impact from Joaquin, assuming it makes landfall, could be similar to either Sandy or Isabel or perhaps a blend of the two. There will be impacts. This includes the potential for flooding, downed trees, property damage and power outages. Areas from northeastern North Carolina to New York City, including the Delaware and Chesapeake bay regions will especially monitor Joaquin’s track and intensity through this weekend.

In terms of loss of life or injury, be sure to heed warnings and orders as soon as they are issued. Protect property by moving items out of harms way to higher floors or a safe location inland, ahead of the storm. People along the mid-Atlantic coast have several days to prepare for Joaquin, should it make landfall in their vicinity. 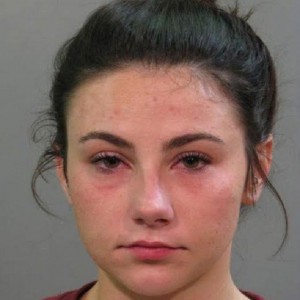