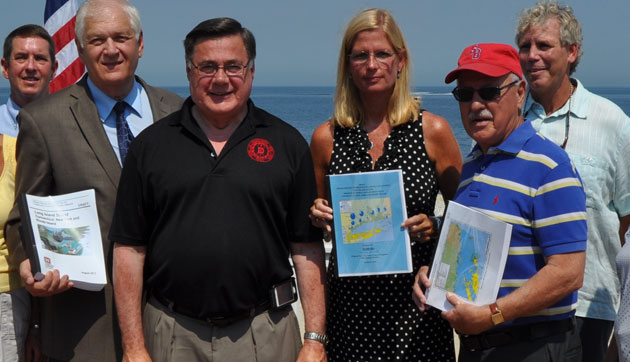 Farmingville, NY – Today, August 17, 2015, Supervisor Ed Romaine was joined by Councilwoman Jane Bonner, Senator Ken LaValle, Assemblyman Steve Englebright and Defend H2O Founder and President Kevin McAllister in opposition to the US Army Corps of Engineers’ (US ACE) and the US Environmental Protection Agency’s (US EPA) plan to continue dumping dredge spoils in the Long Island Sound. The Supervisor warned that the spoils, dredged from rivers and harbors in Connecticut, contain potentially contaminated materials that are a threat to the sensitive ecology of the Sound.

The Supervisor also addressed the US ACE’s failure to notify government officials of an upcoming public hearing in Port Jefferson on August 24 to review its Draft Dredged Material Management Plan (DMMP) and Draft Programmatic Environmental Impact Statement (PEIS) for the Long Island Sound. He criticized the federal agencies for their plan to release the documents to the public on August 17, allowing only seven days for review of what is a long and detailed report. 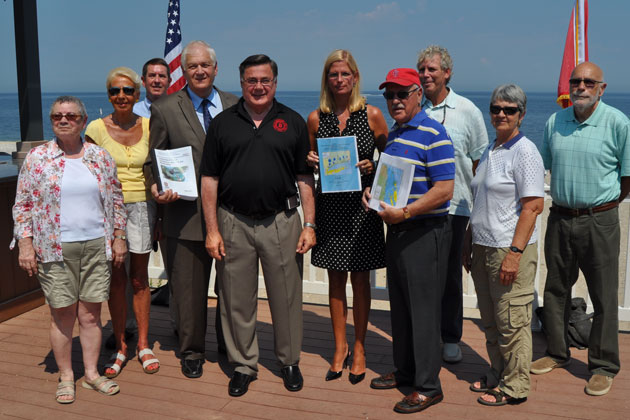 Go to www.nae.usace.army.mil/Missions/ProjectsTopics/LongIslandSoundDMMP.aspx to access the reports. They are linked on the bottom right hand side of the page under LIS DMMP and PEIS.

Supervisor Romaine said, “In Brookhaven Town, we’re making great strides to help improve the water quality in our rivers, lakes and bays and we expect the federal government to do the same in the Long Island Sound. Unfortunately that doesn’t appear to be the case. I strongly oppose continued dumping of spoils in the Sound and I ask my colleagues to stand with me against any plan by the Army Corps or EPA to do so.”

Councilwoman Jane Bonner said, “The Long Island Sound is a haven for recreational boating, swimming and fishing but that could all be threatened if we continue to allow the federal government to go through with their plan. I urge residents to attend the hearings, make your voices heard and help put a stop to further contamination of one of our greatest natural resources.”

Senator LaValle said, “Throughout my tenure, I have worked to put in place policies and programs to protect this vitally important resource.  This year alone, we secured $5 million towards clean water studies and initiatives across Long Island. To dump dredge spoils from potentially contaminated sites would do irreparable harm to Long Island Sound. There have been numerous studies that collectively demonstrate pollution, overfishing, and contaminated dredge material disposal have eroded the health of the Sound over time, thereby reducing its resilience capacity to deal with additional ecological stressors.  I call upon the Army Corps of Engineers and the EPA to put a stop this ill-conceived plan.”

Assemblyman Englebright said, “The waters of the Long Island Sound must be protected from this threat of contamination.  We need to be able to do more than just look out the window and admire the beauty of the Sound. We deserve to have the opportunity for ongoing recreational and commercial activities.  The Sound must continue to provide the public with opportunities such as swimming boating and fishing, without the fear of contaminated dredge spoils. It is disappointing to think that we will have to continue to fight to protect our water bodies from willful pollution.  I stand in solidarity with the Town of Brookhaven in protecting the significant ecological and recreational marine resources of the Long Island Sound.”

“With the efforts underway to restore the environmental integrity of LI Sound, the Army Corps plan to dump dredged sediments flies in the face of restoration. And, how discouraging it is that the EPA would sanction further pollution,” said Defend H2O Founder and President Kevin McAllister.

The US ACE is responsible for maintaining 52 Federal Navigation Projects (FNPs) in Long Island Sound and adjacent waters that include general navigation features requiring periodic maintenance dredging. These include 31 projects in Connecticut, 17 in New York and four in Rhode Island.

Two public hearings will be held in New York: on Monday, Aug. 24, 2015 in the Village Center at Port Jefferson at 101-A East Broadway in Port Jefferson, N.Y.; and on Tuesday, Aug. 25, 2015 at the Marriott Long Island at 101 James Doolittle Blvd. in Uniondale, N.Y. Hearings will also be held in Connecticut. Registration for all meetings will begin at 5:30 p.m. and the hearings will start at 6 p.m. Public comments on the Draft DMMP or Draft PEIS should be forwarded no later than October 5, 2015 to the U.S. Army Corps of Engineers, New England District, (ATTN: LIS DMMP/PEIS Program Manager Meghan Quinn), 696 Virginia Road, Concord, MA  01742-2751 or by email to: meghan.c.quinn@usace.army.mil.

by Alex Sosnowski, Expert Meteorologist for AccuWeather.com NEW YORK, NY - AccuWeather reports a heat wave in much of the Interstate...