According to detectives, two male black subjects entered the Cellular Phone Store located at 1035 Front Street one was armed with a silver revolver hand gun. The first subject is described as in his forties, bald, wearing a red shirt, white pants and gloves.

The two suspects pictured above in security footage are wanted for robbing Cellular Phone Store in Uniondale yesterday. The both suspects are described to be in their forties and bald. One is dressed in all black clothes, the second wearing a red shirt, white pants and gloves.

He punched the male clerk in the face causing a contusion to his eye. The second subject who handcuffed the victim is described as in his forties, bald, dressed in all black clothes. They removed the cash register, an unknown number of cell phones and fled foot westbound on Front Street.

Detectives request anyone with information regarding the above crime to contact Nassau County Crime Stoppers at 1-800-244-TIPS. All callers will remain anonymous. 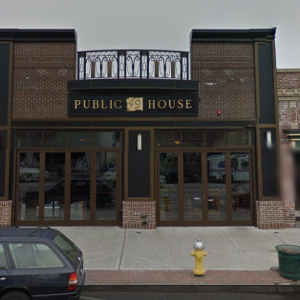