LONG ISLAND, NY – The Seventh Squad reports the arrest of a Uniondale man at 3:16pm on Tuesday, August 4, 2015 for two crimes that occurred in Massapequa.

According to Detectives, Henry Cabezas, 49, of Uniondale did enter the AT&T store located at 450 Sunrise Highway on August 4, 2015 at 2:35pm.  The defendant was observed by an employee removing an anti-theft device from an iPhone6 that was on the display counter and then putting the phone in his pocket.

Henry Cabezas, 49 was charged with Robbery 1st Degree, Petit Larceny and Possession of Burglar Tools after a failed attempt to steal cell phones from from an At&T store in Massapequa. He will be arrainged today, August 5 in Hempstead. Photo: NCPD.

The male victim, 20, approached the defendant as he attempted to exit the store.  At that time, the defendant pulled out a pocketknife, displayed it, handed the phone to the victim and fled the store.  Police Officers observed Cabezas at 3:16pm in front of 5300 Sunrise Highway and placed him under arrest.  Further investigation revealed that defendant Henry Cabezas entered the same location on May 26, 2015 and removed a Galaxy Note S4 without authority to do so.

Defendant Henry Cabezas is charged with Robbery 1st Degree, Petit Larceny and Possession of Burglar Tools.  He will be arraigned on Wednesday, August 05, 2015 in First District Court 99 Main Street Hempstead.

Cops: Couple Wanted For Stealing Over $400 Of Infant Clothing From Store In Massapequa, Photos Included 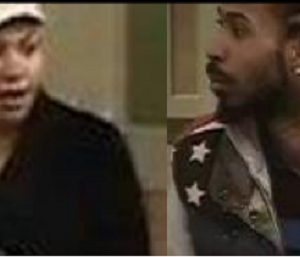 Cops: Couple Wanted For Stealing Over $400 Of Infant Clothing From Store In Massapequa, Photos Included