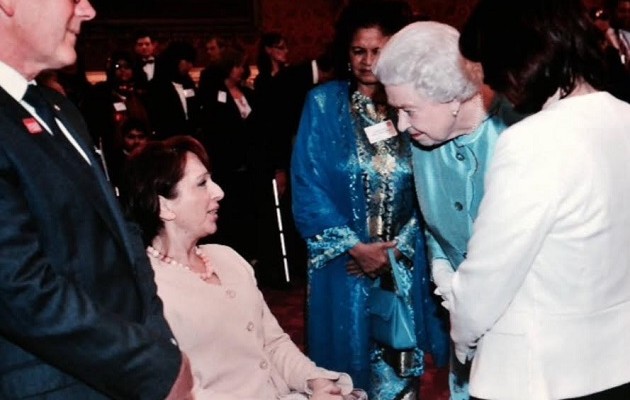 LONG ISLAND, NY – When in a recent interview Daniela Bas told me that she had been blessed with the most wonderful parents in the world, it would have been difficult to argue with the 54 year old Italian born and raised Director of the United Nations Department of Economic and Social Affairs (DESA), an organ of the U.N. which, among its other major responsibilities, is charged with protecting the rights of people with disabilities.

“ My parents never saw me as a child with a disability but rather as a person who could overcome any challenge,” said Danielia, who when six years old was stricken with a then almost always fatal cancer of the spine which caused her to become paraplegic. This permanent condition struck Daniela just twenty days before Italian doctors performed the delicate spinal surgery that would save her life.

“ As I grew up”, Bas reflected, “ I felt very lucky to have survived rather than feeling bitter about my physical restrictions…. My belief about why I survived eventually became that life knew I had a mission. And, of course, my parents always encouraged me to see my life that way.” 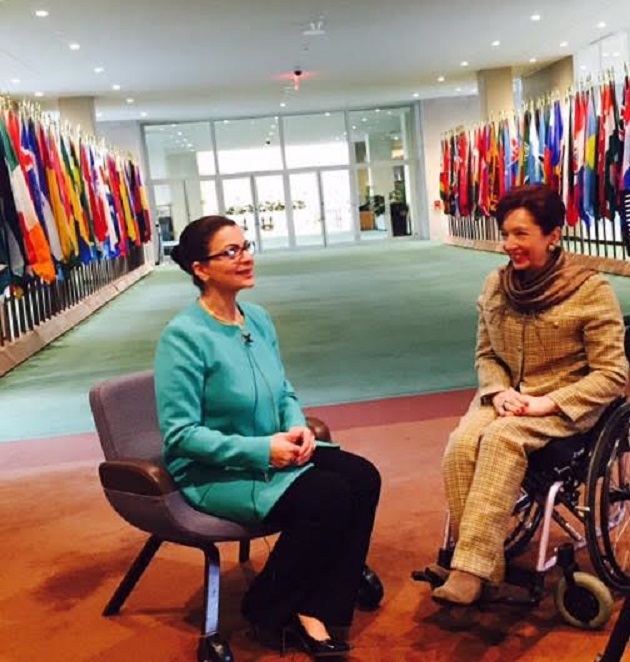 HH Princess Dr. Nisreen Bint El-Sharif Mohammed Bin Bin El-Sharif Hussein El-Hashemite and Ms Daniela Bas. HH Princess’s origin combines history, religion, politics and education: she is a direct descendent of the Prophet of Islam, Mohammed (S), and the grandaughter of King Faisal I of Iraq. Princess Nisreen was born in the State of Kuwait where she received her primary education.

Five months after the six year old was told she would never be able to walk again, that mission would begin with the help of her parents. Despite her new challenges, her mother, Maria, and father, Silviano, wanted her to go to the same local school in the northeastern city of Friuli she was supposed to attend before becoming ill. When told by school authorities that government rules prohibited children with disabilities to attend regular education school with non-disabled children, her parents employed a form of gentle persuasion to convince them to overlook the rules. “ My parents are totally non- confrontational people, so they never argued with the school heads”, Daniela stated.

“ Rather’’ she continued, “ they softly projected with the inner energy that comes from being a devoted and loving parent their belief that I had the strength, ability and drive to succeed in their school. They let them know that I was the same child in my heart, feelings and personality that I had been before I was in a wheelchair.” Agreeing to put the rules aside, the authorities allowed Daniela to attend their school.

Daniela, who has a brother, Marco, 4 years her junior, added that while some of the days from those school years from kindergarten through high- school were not always happy, she views her total educational experience as being positive. “ The culture in Europe in the 1960’s regarding a person with a disability was different than it is today. There were days I remember not being treated kindly by some classmates, and I still remember a teacher in elementary school who couldn’t hide her feelings that I didn’t belong in the school.”

“ Sometimes, sadly”, she added, “ it is the bad that remains in your memories. But I mostly remember the many good friends I made and the many good teachers I had. And I will always be thankful for the knowledge and social acumen I acquired. Most importantly, I am thankful for the freedom that I felt as I learned how to become an independent person.”

After her graduation from high school in 1980 Daniela enrolled and eventually earned her doctorate in a six year combined Bachelors Masters and Doctoral program at the respected University of Studies of Trieste. From there, her mission continued. “ I studied” she related, “ international relations with an eye on how to apply my studies to working on behalf of people with disabilities, and I wrote my dissertation for my doctorate in 1985 on the ‘ employment of people with physical disabilities and the elimination of architectural barriers”’. 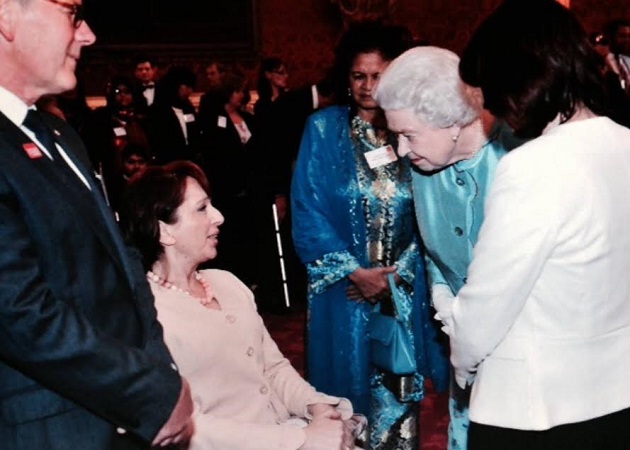 That dissertation and the career path that followed became part of the mission she had by now long believed was her destiny to pursue. In 1986 the United Nations hired Daniela as a Junior Officer in its Disabled Person’s Unit housed in Vienna. Citing the fortuitous events surrounding her obtaining that position Daniela explained, “ 1981 was the international year for persons with disabilities. Two years later the U.N. declared 1983 as the decade from 1983-1893 for people with a disability. By 1986, my dissertation, which had been favorably reviewed by many experts in the field, and my own personal background put me in the right place at the right time.”

Daniela told me that while she had many memorable experiences in that job, there is one incident in particular that occurred in the small multi ethnic nation of Bolivia approximately three years after she was hired by the U.N. that she believes will always remain in her heart and mind. “ When as my assignment I visited a six year old boy in the hospital, I immediately saw that what my colleagues had just previously informed me was horribly true”, she recalled.

“ This poor little boy” she stated, “ had been so badly beaten by members of his own family that he was now paraplegic…. Seeing him lying helplessly on his hospital bed, beaten and abandoned by those who were supposed to love and protect him, unable to move, his body covered in bandages, my memories and emotions instantly traveled back to the past. Just like this boy, I had become paraplegic at six. In the first moment I saw him, I became 6 again, seeing myself lying in the hospital bed, afraid and scared. But, I quickly realized, unlike this poor little boy, I had parents who loved, protected and supported me. I knew I had to help him.”

“Together with my colleagues,” Daniela remembered, “ we were able to raise money to provide him with appropriate medical care and buy him a wheelchair…. Once I returned to Vienna, I monitored the boy’s progress, until I joyfully learned he had been adopted by a wonderful family in the United States. What a great feeling I thought at the time it was to have a job that enabled me to help people like this boy.”

Still, in 1995, after working for U.N.’s Disabled Person’s Unit (which in 1990 with Daniela following moved from Vienna to New York City) for almost ten years, Daniela made the tough decision to leave and move to a new venue. “ It was not an easy decision to make. I loved working at the U.N. and the work I was able to do to help so many people. But after a great deal of thought and reflection, I decided it was time to take new jobs and assume new challenges”, she explained.

These jobs included serving as the Italian representative on European Commission Tourism for All, operating as Management Board Member of the European Union Fundamental Rights Agency (back) in Vienna, and working as an Italian radio and television station journalist and broadcaster focusing on the needs and rights of tourists and vacationers with reduced mobility. Daniel described what all of these jobs had in common: “ The mission of all these positions was to enhance the well being of people through promoting an inclusive and an accessible society.”

When in June 2011 Daniela returned to the U.N. to assume her current position her career had come full cycle. “ From the first days I worked at the U.N,” she said, “ almost thirty years ago to now in my second assignment there my mission has remained the same: To try to empower people to overcome whatever obstacles life has placed in their way. And since I have always tried to live my own life that way, I believe I have lead and continue to lead by example.”

During this time Daniela told me she has met and sometimes worked together on United Nations related projects and programs with a number of celebrities and dignitaries including, her boss, United Nations Secretary General Ban Ki Moon, England’s Queen Elizabeth, Hashemite Princess Dr. Nisreen, physicist Stephen Hawking and singer Stevie Wonder. To her, support from such well known people is very important. “ When people who are known and respected by the public express their conviction that societies live up to the principles of equality and dignity for all, their message will be heard by a very large audience”, Daniela asserted.

An avid international traveler, whose destinations have included Israel, India and Algeria, Daniela told me, the trips she enjoys most are her frequent visits to Italy to spend time with her still very active parents. They are often joined by Marco, a financial planner, who with his wife and teenage daughter moved to America eight years ago. “ My dad fixes my wheelchair, and my mom cooks my favorite dishes”, she explained. “ And Marco, his wife, daughter and I discuss everything from our individual recollections of the past to the good things occurring in our lives today to our hopes and dreams for the future.

“ Our Bas family reunions” she added, “ are simply a celebration of life.”