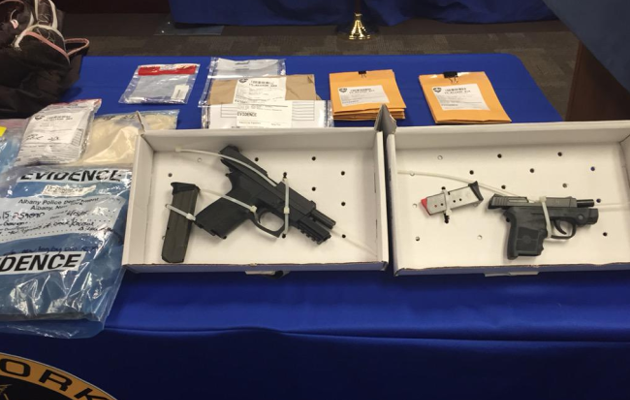 ALBANY, NY – Attorney General Eric T. Schneiderman today announced the indictments against 20 alleged members and associates of a Troy-based gang on charges they operated a high-volume drug trafficking ring. During the year-long investigation, investigators seized more than 1,000 grams of cocaine with an approximate street value of $100,000 and more than 100 bags of heroin and more than an ounce of raw heroin with an approximate street value of $14,000, according to the 249 counts in the felony indictments unsealed today in Rensselaer Supreme Court.

As outlined in the indictments, the narcotics distribution ring was operated out of Troy by a gang called the Young Gunnerz, the largest provider of cocaine, heroin, and illegal prescription drugs in the city. Gang members and their associates allegedly purchased large quantities of drugs from an unknown supplier in the Bronx, and then brought the narcotics back to Troy for distribution throughout Albany County, Rensselaer County, Saratoga County and elsewhere in and outside of New York State.

“We have zero tolerance for drug running and the violence that comes with it,” said Attorney General Eric T. Schneiderman. “If you deal in drugs in New York, we will come after you with the full force of the law. The year-long Operation Trojan Horse showed how powerful collaboration across multiple law enforcement agencies can be in combating drug crimes in the Capital Region.”

“Thanks to the hard work and partnership of law enforcement at the state and local level, we are taking out a violent operation that was supplying dangerous drugs throughout the Capital Region,” New York State Police Superintendent Joseph A. D’Amico said. “We will continue to aggressively pursue criminals who profit from illegal drugs at the expense of the safety and security of our neighborhoods.”

State investigators also seized three handguns during the investigation. As outlined in indictments, members of the Young Gunnerz allegedly drove to Albany on April 19 and fired several shots at rival gang members in an attempt to intimidate them.

As outlined in the indictments, evidence gathered by state investigators showed that Daquan Murray – a.k.a. “Benji Got the Juice” – was one of the alleged leaders of the distribution network and of the Young Gunnerz.

Below is the full list of individuals charged in the investigation:

The defendants face maximum sentences between 9 and 24 years in prison, depending on the individual’s criminal history. Mr. Pontore faces more than five years in prison.

The Organized Crime Task Force has now taken down 25 large drug trafficking gangs, made more than 580 felony narcotics arrests, and seized more than $1.5 million and more than 2,000 pounds of illegal drugs.

PHOTO CREDIT TO: AMY CUTLER for News 10 ABC. State Investigators Seized More Than $114,000 In Cocaine And Heroin That Were Brought To The Capital Region From New York City And Sold In Albany, Rensselaer, And Saratoga Counties And Elsewhere. Investigation By The AG’s Organized Crime Task Force Also Netted A Former Watervliet Police Officer Who Allegedly Purchased Cocaine From His Marked Patrol Car While On-Duty.

AccuWeather: Cool Air to Hold Temperatures Below Normal Across the Northeast This Week

AccuWeather: Cool Air to Hold Temperatures Below Normal Across the Northeast This Week