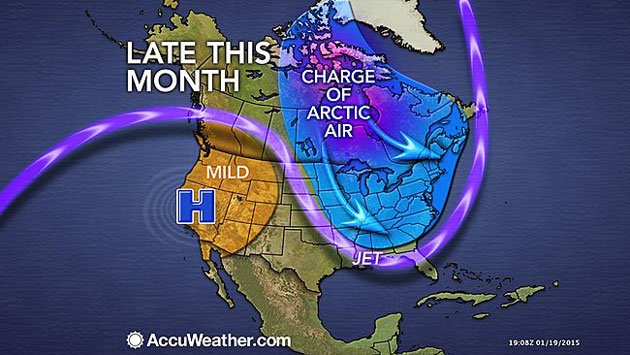 NEW YORK, NY – AccuWeather reports winter will tighten its grip on the Northeast and Midwest during late January as shots of colder air pour in.

A dip in the jet stream will allow chilly air from Canada to sink over the region, reducing the chance of any prolonged warmth from New York City to Chicago through the end of the month.

“We are seeing the northern branch of the jet stream [the driver of arctic blasts] bullying the southern branch, which will prevent warmer air from getting to the Midwest and Northeast during the next 10 days,” stated AccuWeather.com Long Range Expert Paul Pastelok.

“While this limits major storms from developing, it will open the door for re-enforcing cold shots,” Pastelok added. 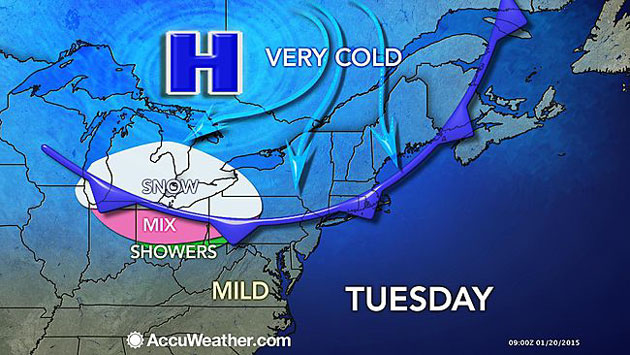 One such cold shot will glance across the Great Lakes and Northeast on Tuesday.

The core of Tuesday’s cold will encompass the St. Lawrence Valley, where high temperatures will average about 10 degrees below normal.

Farther south from much of the Midwest to the mid-Atlantic, temperatures will average near normal for a couple of days. Warm air will hold over the South.

The boundary of the seasonable air will set the stage for a system to deliver a swath of snow, a wintry mix and slick travel from the northern Plains to the Northeast through midweek.

According to AccuWeather.com Senior Meteorologist Alex Sosnowski, “In the wake of this system, with the aid of snow cover, temperatures will dip slightly.”

This will be mostly reflected on night time low temperatures, where the sky becomes clear.”

However, the cold will far from as harsh as what was experienced earlier this month.

“In areas of the Midwest and Northeast that have little or no snow on the ground in the wake of the Clipper storm at midweek, temperatures during the end of the week and into the weekend will average near to slightly above average,” Sosnowski said.

Pastelok has identified Jan. 26-30 as being another very cold period for the Midwest and Northeast.

“While we have seen worse [in terms of arctic blasts], it could be a pretty cold period with temperatures averaging 6-9 degrees below normal,” Pastelok said.

As each cold shot arrives, AccuWeather.com Meteorologist Brian Lada stated that “Lake-effect snow should not be as significant as it was earlier in the winter.”

“This is due to lower water temperatures when compared to earlier in the season. Ice cover is another factor that impacts lake-effect snow.”

As of Sunday, 22.9 percent of the Great Lakes were covered with ice, according to the GLERL.

For those looking for a break from the cold, Pastelok anticipates a slight rebound in temperatures during the first few days of February. However, that does not mean an early start to spring.

“Another surge of arctic air is likely the second week of February,” continued Pastelok. 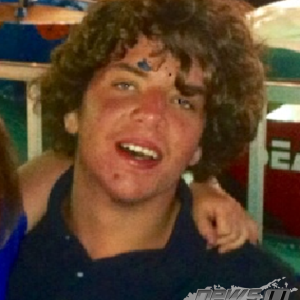