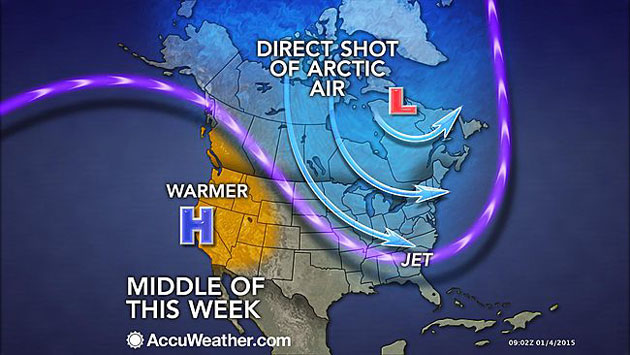 AccuWeather: Brutal Cold to Blast Eastern Half of US, Challenge Records in Midwest

NEW YORK – AccuWeather reports in a weather pattern common for January, waves of arctic air will flow from the Midwest to the Northeast and South into the coming weekend.

The waves of arctic air coming in this week will be painful for those who have to spend time outdoors, unless properly dressed. In addition to the below-average temperatures forecast, AccuWeather.com RealFeel® Temperatures will be 15-30 degrees lower than the actual temperature at times.

RealFeel Temperatures will plunge well below zero at times in the Midwest and Northeast. The cold will spend multiple hours at dangerously low and life-threatening levels. The pattern will raise the risk of frostbite and hypothermia. 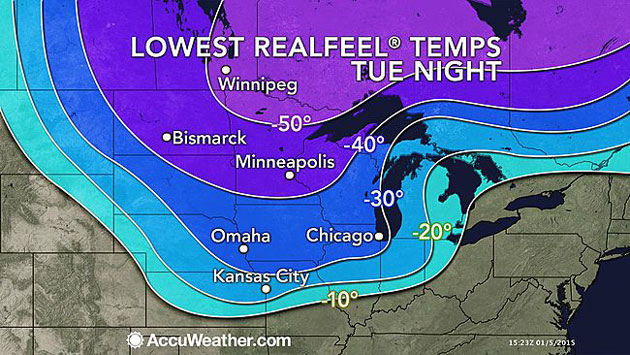 People in the South will want to make preparations to prevent pipes from freezing. Either insulate exposed pipes or shut off water and drain these vulnerable areas to avoid costly damage.

While the pattern this week will send some chilly air into the Deep South and Florida, it should not get cold enough for a damaging frost or freeze in central and South Florida.

According to AccuWeather Chief Meteorologist Elliot Abrams, “Once temperatures drop below freezing in New York City Monday night, they may not get back above freezing until late next weekend.”

“In Chicago, it may not be until late next week before temperatures climb back above freezing.”

The first blast of air sent temperatures below zero over the northern Plains and the Upper Midwest to start the week and caused temperatures to fall during the midday of the day in the coastal Northeast.

A second, stronger blast of arctic air will roll into the Midwest on Tuesday following a storm, known as an Alberta Clipper, spreading a swath of light to moderate snow from the northern Plains to the mid-Atlantic coast. Any snow that initially melts as it falls during the storm will freeze as temperatures plummet. Icy travel may result.

In many cases, air following the Alberta Clipper will bring the lowest temperatures since last winter spanning Wednesday and Thursday. 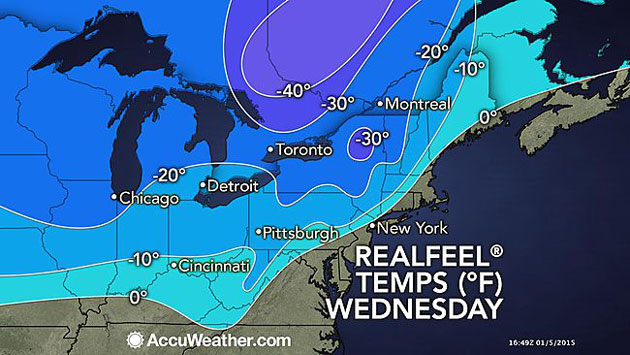 Temperatures may struggle to get above zero F in Chicago and Minneapolis on Wednesday, where nighttime low temperatures will dip well below zero on multiple nights during the middle and second half of the week.

Record low temperatures set 70 to nearly 130 years ago will be challenged in parts of the Midwest on Wednesday night.

Temperatures will fall into the single digits in the central Appalachians on Wednesday and may drop below zero in Boston and along the New England coast by Thursday morning.

Highs will only be in the 20s in Washington, D.C., on Thursday despite sunshine.

Lows will be in the teens and 20s over much of the interior South for the middle and second half of the week. Highs will range from the upper 30s to the lower 40s from Jackson, Mississippi, to Birmingham, Alabama, Atlanta and Charlotte, North Carolina.

According to AccuWeather Senior Meteorologist Brett Anderson, “Rather than the pattern lock in for the remainder of the month, it looks like temperatures will moderate at mid-month from the Central states to the East.”

Whether the warmup will last a couple of days or a week or more is uncertain at this time.

Warm and dry conditions are in store for much of the West into the coming weekend. 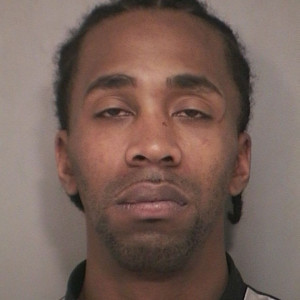 (Long Island, NY) The Nassau County Major Case Bureau has arrested two individuals for a Robbery that occurred on Sunday,...