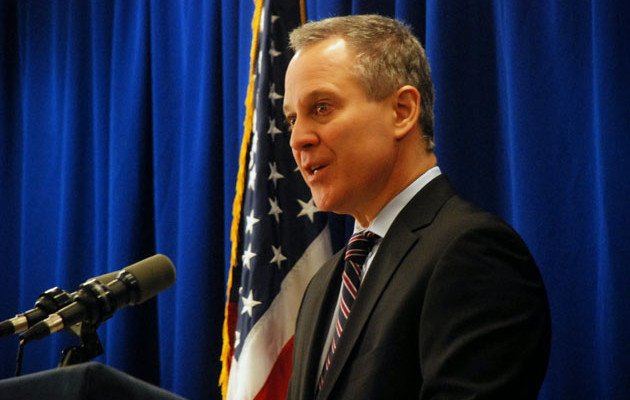 (BUFFALO) Attorney General Eric T. Schneiderman and the New York State Police, the Jamestown Police Department, the Department of Homeland Security and the U.S. Border Patrol today announced that narcotics possession and sale, conspiracy to distribute and other charges have been filed against 47 individuals accused of taking part in a drug distribution network that funneled heroin from Philadelphia and New York City to Jamestown.

As part of a multi-agency investigation code-named Operation Horseback, state, federal and local law enforcement agents led by Attorney General Schneiderman’s Organized Crime Task Force (OCTF), New York State Police’s CNET and the Jamestown Police Department conducted a year-long investigation that included undercover operations, hundreds of hours of covert surveillance, and wiretaps. The investigation led to the seizure of more than 3,000 baggies of heroin with an estimated street value of $60,000, all for distribution in Jamestown.

“Today’s arrests are another step in our tough, continued battle against illegal drugs that have flooded our streets and ruined so many lives,” said Attorney General Schneiderman. “As we have alleged, these traffickers not only wreaked havoc on local neighborhoods—they even sold to prison inmates and rehab patients who should be benefitting from treatment, not caving to the temptations of their addiction. We will keep fighting to put drug traffickers behind bars, clean up our streets, and keep our communities safe.”

Since 2011, the attorney general’s office has broken up 17 major drugs rings, recovered $1.3 million from drug dealers, confiscated 79 kilos of cocaine, more than 500 grams of crack, more than 2,500 grams of heroin, and made 345 felony arrests of drug dealers and kingpins statewide.

According to the indictment, members of the narcotics distribution organization would transport the heroin to Jamestown from New York City in a canister located underneath a 1999 Chevy Astro Van. Wiretaps caught the defendants discussing their drug transactions in a cryptic and coded manner in the hope of avoiding detection by law enforcement. Neftali Cintron, known as Pucho, and his son-in-law Luis DeJesus, known as Papito, would allegedly travel to Philadelphia to obtain heroin, which their minions distributed for them in Jamestown. When they did not like the quality of the narcotics from that source, they would obtain drugs from other dealers in the area.

One of those distributors, Luis Lozada-Berberena, known as Wiso, allegedly operated his heroin business during regular business hours – sometimes telling customers he was “closed for the day” – and had a number of regular customers who would line up to meet and follow him to out-of-the-way locations to make a deal. He allegedly got his heroin from Carlos Encarnacion, who regularly drove to New York City and returned with heroin hidden in the specially outfitted Astro Van. Wiso also purchased suboxone strips from one heroin customer and sold them to another heroin customer, Leslie Rodriguez. She then allegedly smuggled them into Gowanda Correctional Facility in Erie County where her boyfriend was incarcerated there. He then allegedly sold the suboxone, making over $300 per strip.

Defendant Edwin Velasquez allegedly sold to individuals in his drug rehabilitation group. Carlos Echiaverria, known as Boobie, was a dealer who obtained heroin from all of the above sources, and sold cocaine and firearms during the course of this investigation as detailed in the indictment. Boobie enlisted his father-in-law to travel to Buffalo on a bus to bring heroin from New York City for sale in Jamestown.

“This was a significant drug operation that distributed thousands of bags of heroin onto the streets of Jamestown and neighboring communities,” said New York State Police Superintendent Joseph D’Amico. “The demand for this powerful, dangerous and often deadly drug was incredibly high. This speaks volumes as to how widespread the abuse of heroin has become. It is through the combined efforts of federal, state and local law enforcement that has once again resulted in preventing a significant amount of heroin from getting into our neighborhoods. Today’s events send a strong message to dealers throughout the region that we will not tolerate drugs being brought into our communities.”

The indictment is the culmination of a major investigation that is part of Attorney General Schneiderman’s initiative combating large-scale narcotics trafficking and related crimes across the state. While criminal enforcement actions like this are essential to choking off the supply of heroin to our communities, it is also important to combat the epidemic on the treatment side as well. Recently, Attorney General Schneiderman launched the Community Overdose Prevention (COP) Program, which provides funding for every law-enforcement agency in New York to equip its officers with naloxone, a life-saving heroin antidote.

Charged in the Chautauqua County indictment are: 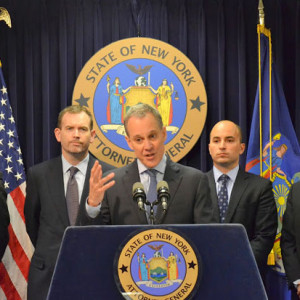 Schneiderman: My Office Will Remain Vigilant To Protect Our Most Vulnerable Citizens And New York Taxpayers (NEW YORK)...