Liz Wahl, an American anchor on the Kremlin-funded Russia Today news network, resigned on air Wednesday in protest over Russia’s invasion of southern Ukraine — the second American reporter to publicly condemn the Russian government’s actions on its own channel. 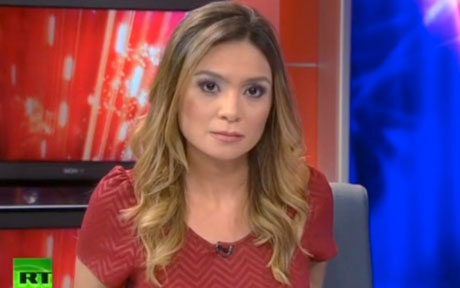 Wahl, who works in the media outlet’s Washington D.C. bureau, claimed she could no longer be “part of a network, funded by the Russian government, that whitewashes the actions of Putin. I’m proud to be an American, and believe in disseminating the truth. And that is why, after this newscast, I’m resigning.”

She was the second Russia Today [RT] anchor in two days to go rogue on the airwaves. On Monday, anchor Abby Martin blasted Russia’s “military occupation of Crimea.”

“Just because I work here, for RT, doesn’t mean I don’t have editorial independence,” Martin asserted. “And I can’t stress enough how strongly I am against any state intervention in a sovereign nation’s affairs. What Russia did is wrong.”

Russia Today is a not-for-profit, 24 hour news network funded entirely by the Kremlin and designed to present the Russian government’s viewpoint on international issues for an English audience. At times, that means reporting widely-debunked stories that push Moscow’s agenda — such as a report this week claiming nearly 700,000 Ukrainian refugees fled to Russia in January and February to escape “revolutionary chaos.”

In an interview with The Daily Beast, Wahl explained it wasn’t just the events of the last few days that forced her to resign from RT. “In order to succeed there you don’t question,” she explained. “In a way you kind of suppress any concerns that you have and play the game.”

She also noted that despite an American-heavy staff, the Kremlin undoubtedly calls the shots. “They’re definitely at the top, the Russians,” she said. “They’re kind of able to pull the strings . . . It actually makes me feel sick that I worked there. It’s not a sound news organization, not when your agenda is making America look bad.”

Unlike Wahl, Martin did not resign from her anchor position at Russia Today — and on Monday the network responded to her on-air criticism.

At the very end of the 3/3/2014 episode of Russia Today’s Breaking the Set, Abby Martin reads a monolog explaining her own personal position about Russia and the United States meddling with the sovereignty of the Ukrainian people.

“Contrary to the popular opinion, RT doesn’t beat its journalists into submission, and they are free to express their own opinions, not just in private but on the air,” it said. It also claimed it would be sending Martin to report in occupied Crimea itself, “to give her an opportunity to make up her own mind from the epicentre of the story.”

Ms. Wahl’s resignation comes on the heels of her colleague Abby Martin’s recent comments in which she voiced her disagreement with certain policies of the Russian government and asserted her editorial independence.

Perhaps concerned by reports of roving bands of pro-Russian gunmen — such as the one that forced a U.N. envoy from the region on Wednesday — Martin refused that assignment. “I am not going to Crimea despite the statement RT has made,” she tweeted.

Ron Paul on Russia: Founders Were Right; Stay Out of Internal Affairs of Other Nations, Mind our own Business

by Brendan Bordelon Obamacare architect Zeke Emanuel seems like an honest guy — even when it gets him in trouble. And that...