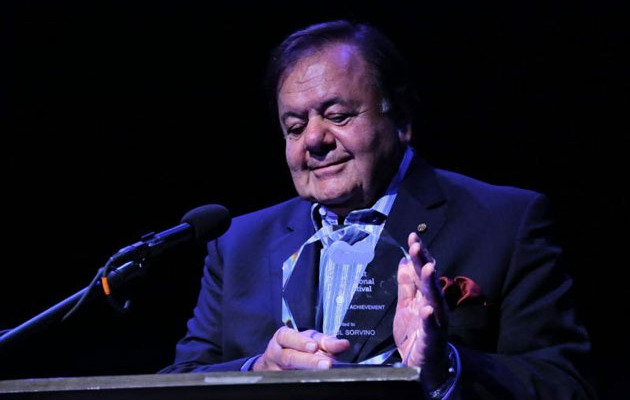 (New York, NY) From October 21-27, 2013 the Gold Coast Arts Center in collaboration with the Town of North Hempstead will present the 3rd annual Gold Coast International Film Festival (GCIFF), and everyone’s invited—again—to join for fantastic films, parties, panels, and fanfare. The festival has brought the latest Hollywood hits and Indie favorites to the Gold Coast of Long Island. Add A-list celebrities and unforgettable events to the mix and GCIFF has become the “go to” Festival for film buffs and it is the last major film festival on the East Coast before Awards season.

This year, the Festival will honor legendary actor, Paul Sorvino (GoodFellas, Bulworth, The Cooler) with a Lifetime Achievement Award on Wednesday, October 23 during the Annual Benefit Gala at the brand new venue: The Space at Westbury. The Gala will also honor Susie Essman, (co-star of HBO’s Curb Your Enthusiasm) with the Artist of Distinction Award for Comedy, assisted by our head of comedy Programming Jeffrey Gurian. From across the “pond” young British actress Bonnie Wright (of the Harry Potter film series), Melanie Lynsky (2 ½ Men, Ever After) and Emmy Nominated Actor, Jason Ritter (Parenthood) will keep the night lively.

This year, greater Long Island will become ‘Laugh Island’ as The Gold Coast International Film Festival shines a spotlight on Comedy with a program of films and events with legendary comedians, writers and actors. We are excited to introduce you to our Head of Live Comedy Programming….(drumroll please)…comedy Writer/Producer/Director Jeffrey Gurian. Credit: Youtube.

GCIFF will offer up a slate of fresh, exciting films including: For a complete festival line up visit www.goldcoastfilmfestival.org for more information.